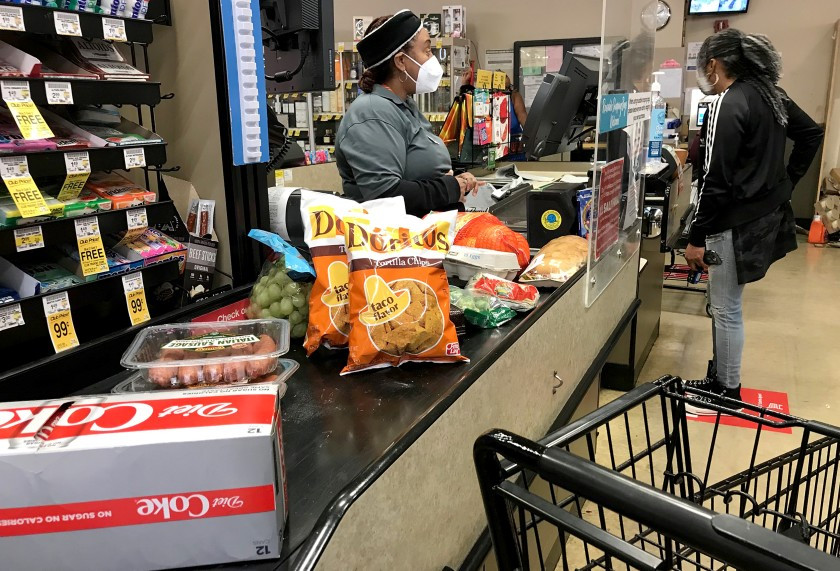 Los Angeles is inching closer to possibly requiring large grocery store chains to temporarily provide their employees with hazard pay amid the coronavirus pandemic — despite the potential for legal challenges.

The City Council’s Economic Development and Jobs Committee on Tuesday, Jan. 26, unanimously directed the city attorney’s office to draft an emergency ordinance that would require grocery stores with more than 300 employees nationwide to provide the “hero pay” to workers. The ordinance, if it gets through that committee and the full council, would provide grocery store workers in Los Angeles with an additional $5 an hour for 120 days.

Grocery stores statewide and nationally have remained open throughout the pandemic because they provide an essential service. But it also puts their employees at greater risk of contracting the virus, because they must interact with customers. While grocery stores have implemented various safety measures and provided hazard pay early in the pandemic, most have since let the wage bumps lapse.

“Our grocery and drug retail workers have been on the frontline since the beginning of this pandemic,” said Los Angeles Councilman Curren Price Jr., the committee’s chair. “Putting them (at risk) as COVID-19 cases and deaths continue to surge without any type of hazard pay is not only morally wrong but disrespectful for all of their efforts.”

But the committee also asked for the chief legislative analyst’s office to look at both the economic impact of the proposed ordinance and potential legal challenges — the latter of which could pose a real obstacle.

But the California Grocers Association, which represents grocery stores, announced last week that it had filed a federal lawsuit against Long Beach, arguing the hazard pay is unconstitutional.

That led the Los Angeles City Council committee to ask for an expedited report about possible challenges.

The report, Councilman Bob Blumenfield said, would take seven to 10 days to complete.

Once the committee has that report and a draft of the emergency ordinance, the committee will then vote on whether to send the item to the full City Council for final approval. The committee on Tuesday did not have an estimated timeline, but said it hopes to get the hero pay into effect as soon as possible.