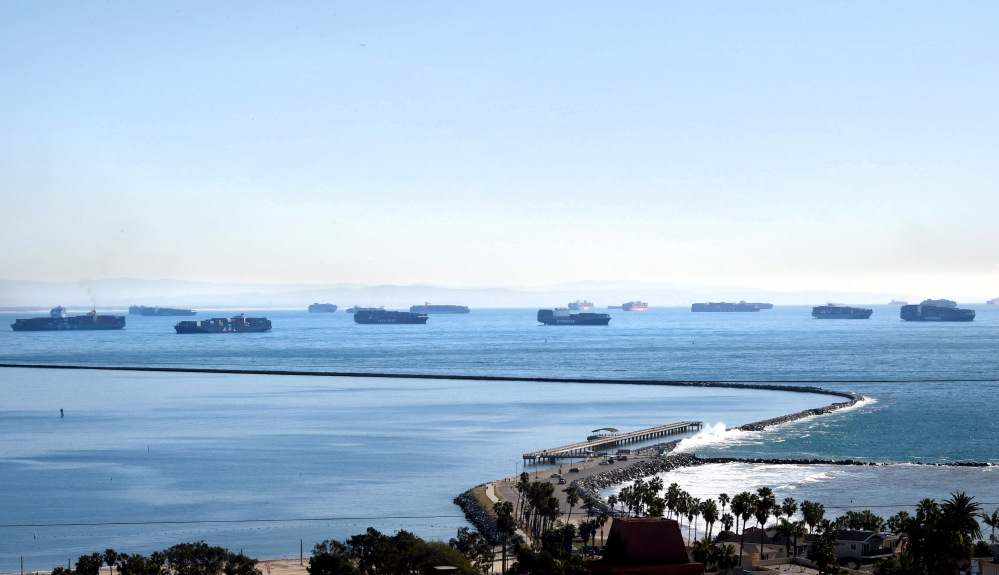 Officials hope forecasters are right and the winds will be less fierce than those earlier in the week that sent about two dozen huge cargo ships fleeing from the local harbors for protection. But the Coast Guard and other agencies weren’t taking any chances on Wednesday — with a record-breaking 103 ships in the twin ports, and more on the way — as they braced for the storm’s arrival.

Winds from the newest storm are expected to reach about 40 mph, said Kip Louttit, director of the Marine Exchange of Southern California. That shouldn’t be severe enough to pose problems from a shipping perspective, he said. Earlier this week, however, 63-mph winds forced cargo ships to leave their anchorage spots for more sheltered moorings in front of Catalina Island and off of Dana Point along the Orange County coastline — where topography blocks some of the wind force.

With heavy rains and mountain snow anticipated, “It will be horrible for driving, but the wind is not expected to get high enough” to impact the record number of ships waiting at anchor at the twin sea hubs, he said.

It’s been a challenging new year for the twin ports. Both have battled to fend off bottlenecks as cargo volumes surged by about 50% in the last half of 2020. Complicating the high volumes are increasing COVID-19 cases hitting longshore workers. Infections since December 2020 and in the first 25 days of 2021 have “almost surpassed the total cases reported in the final eight months in 2020,” according to Port of Los Angeles spokesman Phillip Sanfield.

This week’s first storm, on Monday, Jan. 25, brought with it powerful wind gusts out of the west, Louttit said, forcing 24 ships to request clearance to move from anchorage to seek more protection. The sight of cargo ships off the south Orange County coastline drew plenty of curiosity from residents along the shoreline.

Coast Guard officials said they will keep a close eye on weather conditions at sea and in port over the next few days.

With waves expected to range from 10-13 feet and winds at 40 knots in some areas at sea, USCG officials promised extra patrols by both boats and aircraft to monitor anchorage spots.

“The weather is scheduled to be pretty dicey,” said Lt. Ben McIntyre-Coble, adding that the Coast Guard’s responsibility is to ensure the safety of life at sea, among other duties.

The Coast Guard works in tandem with the Marine Exchange of Southern California, based in San Pedro, whose job it is to manage the movement of vessels in and out of the two ports. The exchange is staffed with both Coast Guard and civilian personnel.

“With all the ships lined up, we are aware and have stepped up our presence and patrols,”  McIntyre-Coble said.

With a current backlog of ships waiting to get into the ports, ships are given direction by the exchange on where to anchor when outside the port. These anchorages are staggered starting about half-a-mile from the ports’ entrance, and south to locations at sea, parallel to such cities as Newport Beach and Laguna Beach along the Southern California coast.

The ships and their crews will be directed to 26 chartered anchorages and given instructions by the exchange.

Locations must be deep enough to allow a large cargo ship to anchor safely, and often range between 40-70 feet.

“The crews are highly trained and capable. Once they drop anchor, they’re pretty much set,” McIntyre-Coble said.

On Monday, ships moved from their anchorages to safer spots such as in front of Catalina and San Clemente islands.

“Those calls are made by captains,”  McIntyre-Coble said. “When you have winds and an increased sea state, sometimes the best call is to find a landmass to block the direction of the wind flow.”

McIntyre-Coble said the Coast Guard, which routinely patrols their area of responsibility to ensure national security, will have more planes and boats on the water.

They will also work hand-in-hand with local and county agencies such as the Orange County Sheriff’s Harbor Patrol.

“This is something we’re keeping an eye on,”  McIntyre-Coble said. “We want to make sure vessels can remain in place safely.”

High winds and churning waves can wreak havoc on container ships in the open seas.

On Jan. 21, reports were confirmed that up to 750 containers were lost off of the Maersk Essen as it was midway through the Pacific bound for Los Angeles when high winds and rough seas hit. The 13,100 TEU ship was diverted to Mexico after the boxes were lost overboard during a storm.

This week’s storms are anything but stellar timing for port leaders, who are already weathering record cargo loads during an often deadly pandemic.

Sanfield said some 800 longshore men and women working in both ports have either tested positive for COVID-19 or are in quarantine.

“There’s been a significant uptick in cases since Thanksgiving,” he said.

Sanfield said the port has locations identified near terminals for a “mass vaccination center” for port workers.

“We will mobilize people to get this done when we get the word,” he said.

In Long Beach, a mass vaccination clinic has already been launched at the Long Beach Convention Center that could be used for dockworkers, said Mario Cordero, executive director of the Port of Long Beach.

“The (cargo) surge continues and many people believe it will continue on to the spring,” he said of the heavy workload. He commended local and state lawmakers for supporting quick vaccinations for ILWU workers so cargo can continue to be processed quickly.

“What we’ve seen among our elected leaders is a concern for this issue,” Cordero said. “The good news is there’s a dialogue.”

Prioritizing vaccines for dockworkers — who total 15,000 in the twin ports, counting the part-time casual workforce — is essential to keeping cargo, and the economy, moving, said supporters who include many local lawmakers, including U.S. Reps. Nanette Diaz Barragan, D-San Pedro, and Alan Lowenthal, D-Long Beach.

Ponce De Leon said the exact numbers from longshore ranks now stand at 803 known COVID-19 infections since the pandemic began early last year. There have been 12 reported deaths in the past 55 days, he added.

The ports are experiencing an historic and sustained cargo surge, according to the Pacific Maritime Association, which represents shipping interests that rely on the twin hubs.

“It’s vital that we have as many ILWU members working as possible,” said PMA CEO Jim McKenna in a written statement. “The best way to ensure the continued reliable operation of America’s largest maritime gateway is by securing vaccinations for the men and women of the ILWU as quickly as we can.”

In emailed comments to the Southern California News Group on Wednesday, Ponce De Leon said that so far, work crews have been keeping up with the operating terminals, but that the pace and workloads have been challenging.

Louttit said typically, the ports are sized to handle a flow of about 170 ships a month.

“We thought that the Chinese New Year would shut things down, but they just kept working,” he said.

Usually, he said, about 17 ships are anchored offshore, waiting no more than two weeks to get into port.