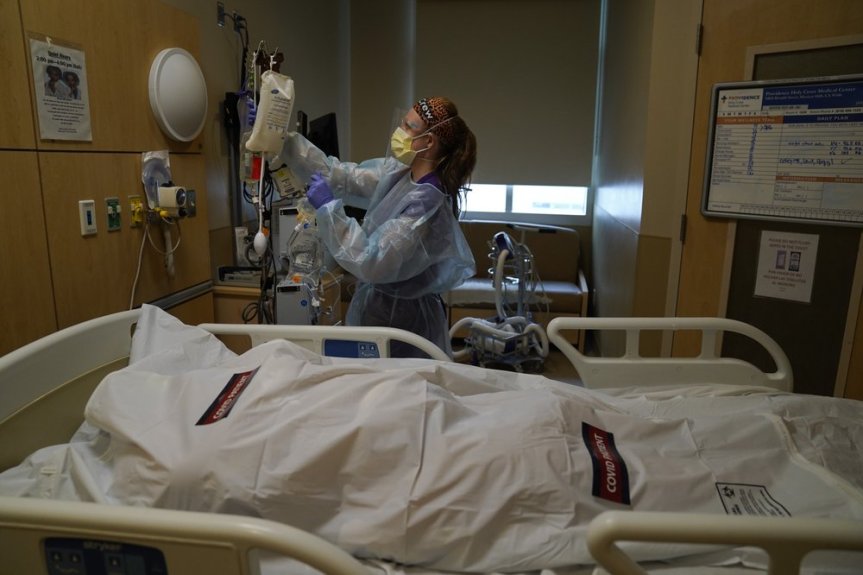 Los Angeles County elementary schools could reopen in as soon as 3-4 weeks, the county’s public health chief said on Wednesday, Jan. 27. But it will take a massive, disciplined effort to reduce coronavirus case rates, she warned, as businesses and households emerge from the recent lockdown.

Public health officials were meeting with local business owners and labor groups in preparation of a new public health order that would likely be issued Thursday, officially allowing restaurants to reopen for outdoor dining. Cardroom casinos, recreational facilities, zoos and aquariums are also expected to be allowed to open outdoors, all at 50% capacity.

“It’s really up to us whether we can sustain these reopenings without jeopardizing each others’ health and the ability to get more schools to reopen,” said County Public Health Director Barbara Ferrer during a Wednesday briefing, a day after marking a year since the first coronavirus case was discovered in the region.

Meanwhile, another grim milestone loomed within reach – 16,000 deaths — as another 307 fatalities raised the county’s death toll to 15,897; 6,917 new cases raised the pandemic-long total to 1,091,712. While the numbers are not as imposing as they were just two weeks ago, they are still much higher than before November, when new cases hovered at near 1,200 cases per day.

Hospitalizations continued to decline, however. Wednesday’s 6,026 COVID-19-positive patients was a decrease of 187 on Tuesday and significantly lower than the peak of 8,000 in recent weeks. About a quarter of patients remain in intensive care units.

With the lifting of the state-decreed regional stay-home orders, L.A. County remains in the most stringent purple tier on the state’s dashboard. So the county’s daily case rate must be at or below 25 new cases per 100,000 residents. Right now, it’s at 48.

“If you care about reopening schools, these next three or four weeks we have to do everything right to get us there,” Ferrer said, noting a similar challenge to businesses.

And that kind of widespread adherence hasn’t always come easy in a county of 10 million, which is gradually inching downward from the most devastating surge of the year-long pandemic.

“I do believe it will take us two to three weeks to reduce that rate and that assumes that everybody continues to their very best, play by the rules to keep making sure that transmission goes down and not back up,” Ferrer said.

And even if it does, schools will need to make sure they are meeting safety requirements on site, if they are to reopen while the county is in the most stringent tier, Ferrer said.

Both Ferrer and Dr. Christina Ghaly, who runs the county’s Department of Health Services, warned that that the county remains in a tenuous place. While still at much higher-than-normal levels, demand on hospitals is steadily decreasing. But deaths — a lagging indicator — are still climbing, and will likely increase over the next two weeks.

She warned residents to limit gatherings, especially with the looming Super Bowl — a prospect that has leaders worried of a repeat of surges in the wake of past sporting events and celebrations..

“We know that Super Bowl Sunday is coming up, and we can’t repeat the mistakes of the past,” she said. “It will be tragic if the Super Bowl becomes a super-spreader of coronavirus.”

While the available doses of coronavirus vaccines remained thin and unpredictable, Ferrer reassured residents awaiting their second dose of the vaccine that “every resident is guaranteed a second dose,” at the same site where they received their first dose.

This week, anyone who received a first dose at a county-operated site last week will be sent emails confirming place and date of second dose appointment, and will offer a link to confirm registration for receiving a second dose.

She urged residents who have been vaccinated at other, non-county-operated sites, such as Dodger Stadium, to contact the provider at sites where they were vaccinated. They will be able to give information on when to get that second-dose appointment.

Ferrer said allocations of COVID-19 vaccine continue to lag behind demand, with the county expecting to receive roughly 188,000 doses next week. Many of those, however, will be needed to administer second shots to people who have already received the first dose of the two-dose regimen.

As of the end of last week, the county had received a total of 853,650 doses. It received an estimated 143,900 doses this week, pushing the total to nearly 1 million.