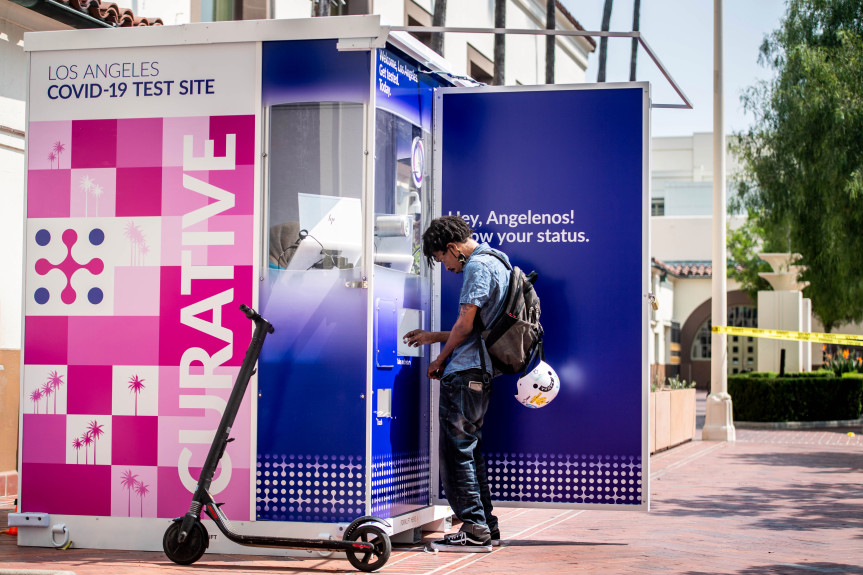 The Los Angeles County Department of Health Services announced Sunday, Jan. 10, that it will discontinue the use of COVID-19 PCR tests made by San Dimas-based Curative at pop-up testing sites.

The U.S. Food and Drug Administration warned patients and healthcare providers a week ago about the potential risks of false negative results, specifically with Curative’s test.

The change, which will happen this week, comes after a review of the data that prompted the FDA alert. The Curative tests will be replaced with Fulgent Genetics tests, officials said.

“We are confident in our data and we are working with the FDA closely on the matter,” Curative CEO Fred Turner said last week. “Testing sensitivity and accuracy on behalf of our patients is at the heart of our work.”

All COVID-19 tests have a risk of false negative results, DHS officials said. That means a person may test negative despite having the disease because the results are sensitive to how well the sample was collected and the concentration of viral RNA in it.

While no specific problems with the company’s test were identified, the FDA did say the test must be performed in accordance with its labeling and should only be used in symptomatic people within 14 days of symptoms developing. Additionally, the FDA asked that people taking the self-administered test be observed by a healthcare worker.

“When the test is not performed in accordance with its authorization or as described in the authorized labeling, there is a greater risk that the results of the test may not be accurate,” the FDA said in a safety alert Monday, Jan. 4.

There is no reliable way to detect early infection, meaning that infection often spreads before symptoms have time to develop, DHS’ experts said. Nevertheless, PCR tests — including the Curative test — remain better at detecting disease than some other tests, including rapid tests, they added.

DHS reminded people to follow public health guidance to protect themselves and others by staying home whenever possible, wearing a face covering over the nose and mouth, avoiding gatherings and frequent hand washing.

Those who set up an appointment arrive and self-administer the test by swabbing inside their mouths. Directions are given by on-site staff.

Riverside County also has contracts with Curative to perform testing at various sites.

Self-administered tests are more prone to false negative results compared to tests administered by a health professional, regardless of the vendor, Riverside County Public Health Officer Dr. Cameron Kaiser said last week. A person can be negative one day and positive the next, even with a nasal swab test, he said.

“This is because sometimes people don’t follow the instructions precisely, even though they intend to do so,” a statement from Kaiser said. “If there isn’t enough of viral material in the sample for any reason, it won’t be positive. Staff members are available to explain the process to ensure residents perform the self-administered test correctly.”

On Thursday, LA Mayor Eric Garcetti defended the city’s decision to use the test as it has been able to detect positive results from 92,000 asymptomatic people, which he said, would have otherwise gone untested and further spread the virus.

Garcetti said the FDA guidance was “vague” and had no data attached to it.

The FDA urged medical providers to use a different test if they suspect a patient’s results from the Curative test may be false. Individuals who were tested more than two weeks prior don’t need to be retested unless they show symptoms or suspect they contracted the virus.