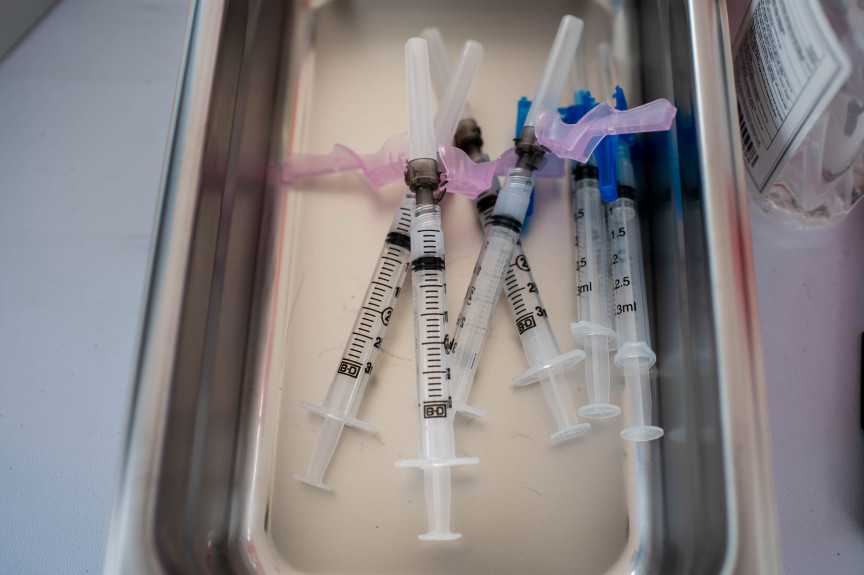 Teachers in Los Angeles County can begin receiving the coronavirus vaccine on Monday, March 1 — but just how many doses will be available for educators will depend on supply, which is still just an estimate.

Among the slightly more than 200,000 vaccine doses that officials expect, 25% to 29% will go toward teachers and administrators, with 9% of those doses going to private school teachers and staff.

First priority for doses goes to those with second-dose appointments. The remainder will be divided into eligible categories, teachers being just one of the newly eligible groups beginning Monday. Others include childcare providers, food and agricultural workers and emergency service personnel.

Officials said Wednesday, Feb. 24, they were still unsure exactly how many vaccine doses they would have to offer next week. Once they did have that information, likely in the coming days, then school districts and health care providers will be notified what they should expect. The next phase of the vaccine rollout — amounting to nearly 1.8 million people — relies more heavily on local pharmacies, clinics and hospitals.

Vaccines will be provided in closed groups organized by particular worksites or schools. Certain groups will also be designated for various days at the county’s five mega-pod sites. Childcare workers will be prioritized on Saturdays as well as given a specialized site at Children’s Hospital Los Angeles. Independent and private schools will be reserved for Sunday.

Most school districts have by now formulated a plan for how vaccine doses will get into the arms of teachers and staff members. Los Angeles Unified School District as well as districts in Glendora and Culver City will coordinate vaccines themselves. Long Beach and Pasadena also will have their own plans monitored by the health departments in those cities.

The majority of public schools will be divided into five groups. Each group will receive a percentage of vaccines based on several factors. They include the number of students receiving free or reduced cost lunches (a measure of poverty in a community) and the rate of coronavirus infection in the surrounding neighborhood.

“One group that serves 20% of county services might be allocated 30% of weekly vaccines because they have been identified as a high need community,” said Los Angeles County Office of Education Superintendent Debra Duardo during a midday briefing Wednesday. “Within the group, the vaccines are distributed evenly.”

By Thursday, Duardo promised to release the groups of school districts to reveal how each district will be categorized.

To the relief of many athletes, high school football and other high-contact outdoor sports can begin practicing and playing games. Boys and girls soccer, as well as baseball and softball, will also begin soon as a result. And beach volleyball can resume on the sand.

County case rates continued to fall this week now at 12.3 new cases per day per 100,000 people. But still, many deaths continued. On Wednesday, the county reported that it discovered another 806 deaths going through death records from the surge in December and January.

“This was a period where many deaths occurred throughout the county and not all of them reported to public health,” Ferrer said. “Our system relies on daily reports and also uses vital records by reviewing the causes of death. Then we link those reported cases to the death report forms. During the surge death reports were often delayed due to the high volume of death reports.”

Officials also reported another 136 deaths for a total now of 20,987 reported deaths from COVID-19 beginning roughly one year ago.

Hospitalizations related to COVID-19 fell in L.A. County below 2,000 on Wednesday, according to the state database, the first time the number has been that low since Nov. 26.

The county’s daily update did not include the latest numbers from Long Beach and Pasadena, cities that operate their own health departments. Pasadena’s two additional fatalities raised its death toll to 311; 20 more cases increased that total to 10,825. Long Beach reported eight additional fatalities, bringing the city’s death toll to 826; 82 new coronavirus cases raised the city’s total to 51,033 since the pandemic began.

Officials were still cautiously optimistic the trends will continue downward with Ferrer stating Wednesday there is still no sign of a surge after the Super Bowl weekend and President’s Day holiday. The UK variant and other virus mutations continue to be a concern, Ferrer said. The county has so far identified 18 cases of the U.K. variant and is tracking other mutations of interest.