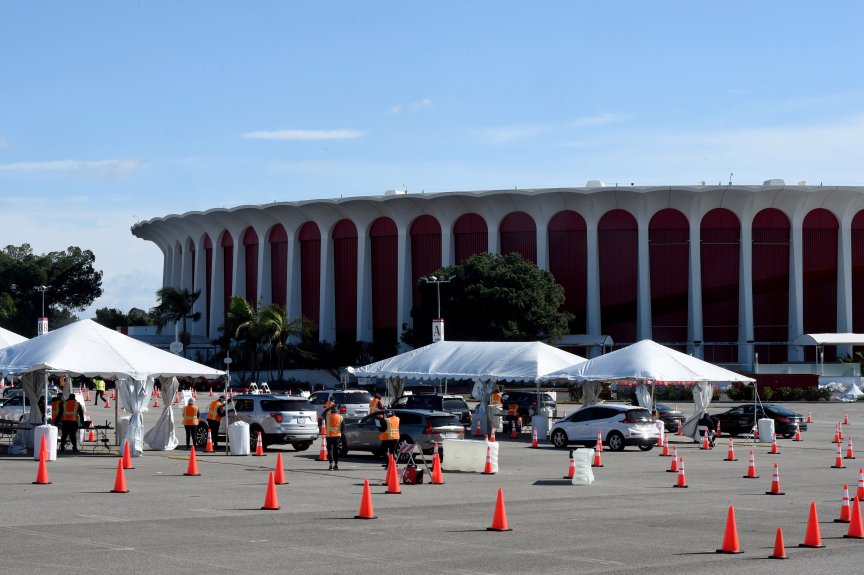 With coronavirus statistics continuing to budge downward and a reimagined vaccination signup website to show off on Monday, Jan. 25,  Los Angeles County health officials expressed guarded optimism that the pandemic was started to ease up at last — with fingers crossed that they would get enough vaccines soon to make a bigger dent in the mammoth task of inoculating 10 million county residents.

After state health officials today lifted all regional stay-at-home orders, including in the 11-county Southern California region, and Los Angeles County authorities said they will align with the state and allow outdoor dining to resume on Friday.

But amid that news — and the loosening of business restrictions, including the return or outdoor dining — public health officials reported 46 deaths on Monday along with 6,642 new cases, for pandemic-long totals of 15,303 and 1,079,369, respectively. The numbers were lower than most recent reports, but officials said that was likely the result of scaled-back weekend record-keeping.

More than 5.3 million residents have been tested in LA County to date, with a cumulative 19 percent positivity rate. The 7-day average number of daily cases peaked on Jan. 8 with more than 15,000 cases. As of Jan. 20, that average dropped around half to 7,328 daily cases.

“We are still experiencing a lot of transmission,” said Barbara Ferrer, the county’s public health director. “At the height of our summer surge last year, our average case count peaked at below 3,000. And when that surge began last summer we were reporting less than 1,000 new cases every day.”

The number of people hospitalized for COVID-19 in L.A. County also continued its recent downward trend Monday, to 6,307, according to the state dashboard — down nearly 200 from Sunday and a significant drop to the peak of more than 8,000 earlier this month.

“This is where we need to head to continue to slow transmissions and begin to see real recovery in LA County,” she added.

The county’s daily report did not include the latest numbers from Long Beach and Pasadena, cities that operate their own health departments. Pasadena posted 11 new fatalities, raising its death toll to 237; 80 new cases increased its total since the pandemic began to 9.856. In its first update  since Thursday, Long Beach reported 19 deaths, for a total of 596 and 994 cases, for a total of 46,477.

After the county’s vaccination portal, VaccinateLACounty.com, was marred by technical issues and residents unable to book appointments last week, county officials announced Monday that the portal has since incorporated the state’s new registration platform, MyTurn. The site appeared to me more functional, but visitors were still likely to be disappointed by the thin supply of doses.

The portal allows eligible residents to sign up to receive the vaccine at the array of large-scale vaccination sites, including the Forum, Dodger Stadium, Six Flags Magic Mountain and Fairplex. Folks not yet eligible for the vaccine can register to receive updates for when it is their turn.

Currently, there are no available appointments, Ferrer said, but more slot times would be made available this weekend.

County officials said around 4 million doses are needed to get through Phase 1A and seniors, which are included in Phase 1B. The county has received 853,650 doses of vaccine. Of that, 685,875 doses of vaccine — or about 80 percent of all doses— have made it into residents arms.

“At any given moment in time, there is always a certain amount of doses that are either in transit as they’re being redistributed to our more than 200 sites across the county,” Ferrer said. “Or they’re being used at these sites for appointments in the upcoming week.”

The weekly shipments of vaccines, Ferrer said, are significantly lower than what the county needs.

While Long Beach, which has its own health department, will likely begin vaccinating educators this week, LA County remains focused on getting healthcare workers and those 65 and older vaccinated. Vaccines are still not widely available for L.A. County teachers and staff.

Ferrer encouraged residents to continue checking the portal for updated appointment slots. For those without internet connection or have trouble navigating the site, dialing the county’s hotline 833-540-0473 was offered as an option.

Also Monday, the South Coast Air Quality Management District extended its recent order lifting a cap on the number of cremations that can be performed at crematories in the county. The order was issued last month when virus deaths were soaring, creating backlogs of bodies at hospitals and funeral homes. The order will now remain in effect until at least Feb. 4.