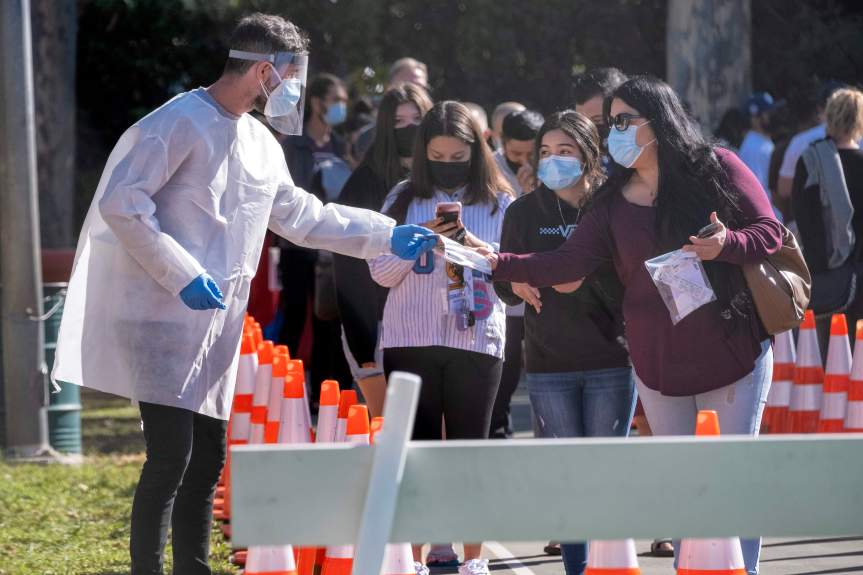 The mark was reached as a continuing wave of sick patients threatened to overwhelm the healthcare system and renewed hope was aimed toward a vaccine that could not arrive soon enough.

At current levels of infection, L.A. County could see by next week as many as 700 new coronavirus patients admitted each day to hospitals based on current projections.

That latest estimates were derived from the county’s current experience where about 10% of positive cases end up needing hospital care of between five to seven days on average. With the county on a record-breaking streak of daily new cases capping on Sunday with more than 10,000, it’s not hard to see how the number of hospital admissions could quickly skyrocket even more than they are currently.

“We thought that the final surge was maybe behind us but here we are again seeing something more significant than we ever could have imagined,” said L.A. County Board of Supervisors Chairwoman Hilda Solis.

A stunning 74% of hospitals as of Monday were on diversion status for advanced life support meaning they were turning patients away. In normal conditions roughly 10% to 15% are on diversion status, according to Department of Health Services Director Dr. Christina Ghaly.

“We are actively redeploying staff for additional resources and we have halted all nonessential services,” Ghaly said.

The region’s available ICU capacity fell to 10.1% in Southern California, based on a new metric dictating regional stay-at-home orders.

The light at the end of the tunnel at this point was the vaccine. But as Public Health Director Barbara Ferrer told the County Board of Supervisors on Tuesday, the phased distribution will progress slowly and there is some uncertainty as to how many doses will be available and how quickly.

The first round of vaccines expected to arrive in about a week will include 84,000 doses of the Pfizer vaccine and will go toward healthcare workers at acute care hospitals.

The third installment of the first phase to hopefully arrive before the end of the year will prioritize the 250,000 to 300,000 healthcare providers including emergency medical services but not firefighters and police which will come in January. CVS and Walgreens plan to be an integral part of the distribution strategy at this point, Ferrer said.

“There is some hope with a vaccine around the corner but it’s clear it will be several months before a vaccine is widely available and even longer until enough people are vaccinated,” said Supervisor Janice Hahn, who asked the public health director to consider a “harm reduction” strategy once the rate of cases reduce to a level where the regional stay-at-home orders are lifted.

“Both our health orders and state orders are strict, saying not to gather with anyone outside their household,” Hahn said. “Yet a third of residents report they’ve gone over to someone’s home in the past seven days. When we do get through to them, they think we’re being arbitrary and unfair.”

Ferrer defended the current strategy as the best able to slow the spread of the virus.

“We do hope these new stay-at-home order gives us an opportunity to place pause on all nonessential activities,” Ferrer said.