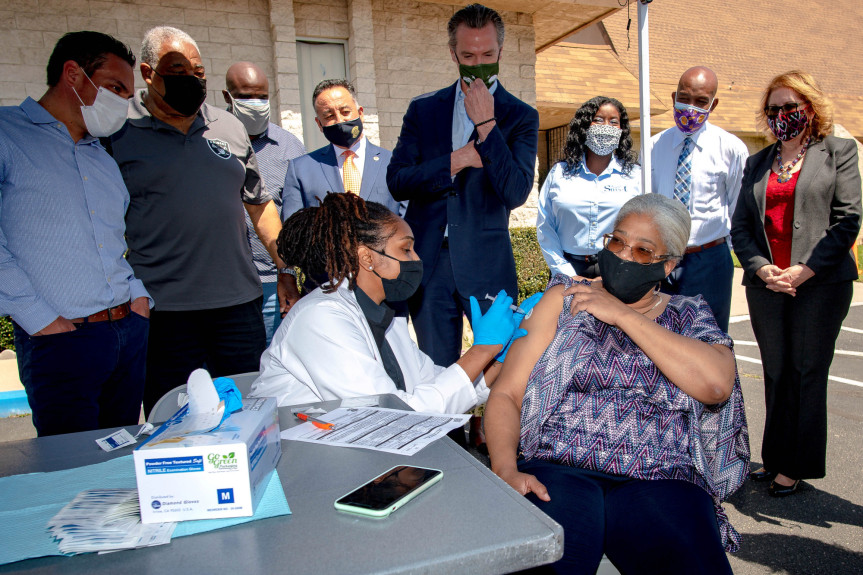 Public health officials in Los Angeles County will stop administering the Johnson & Johnson vaccine after reports that six women from the ages of 18 to 48 developed unusual blot clots.

The pause was recommended by both the U.S. Food and Drug Administration and the Centers for Disease Control and Prevention on Tuesday, April 13. L.A. County public health officials said in a statement Tuesday that they would follow the advice out of an abundance of caution.

Long Beach and Pasadena, which both have their own health departments, will also follow federal advice and temporarily stop using the Johnson & Johnson vaccine.

People with appointments to receive a Johnson & Johnson vaccine in L.A. County will be contacted to reschedule or provide a new appointment date for a Pfizer or Moderna vaccine, according to the Department of Public Health.

In L.A. County, roughly 200,000 Johnson & Johnson vaccines have been administered, including into the arms of Gov. Gavin Newsom and California Health and Human Services Secretary Dr. Mark Ghaly. In all, L.A. County has administered more than 5.1 million doses, most of which have been Pfizer or Moderna.

Across the country, nearly 7 million people have received the Johnson & Johnson vaccine, and reactions are extremely rare, officials said. The blood clots that spurred the pause appeared six to 13 days after the women received the vaccine. The pause will last until the FDA and CDC finish their investigation, which is expected to last for several days.

“We are recommending a pause in the use of this vaccine out of an abundance of caution,” Dr. Peter Marks, director of the FDA’s Center for Biologics Evaluation and Research, and Dr. Anne Schuchat, principal deputy director of the CDC, said in a statement.

“This is important, in part, to ensure that the health care provider community is aware of the potential for these adverse events,” the statement added, “and can plan for proper recognition and management due to the unique treatment required with this type of blood clot.”

The blood clots, the statement said, seem to be extremely rare.

“People who received the vaccine in the last 3 weeks should look for any symptoms of these unusual clots,” according to the L.A. County Public Health Department, “including severe headaches, abdominal or leg pain, and shortness of breath, and contact their medical provider if symptoms develop. People who don’t have a medical provider can call 2-1-1 to connect with a healthcare provider.”

Kaiser Permanente said, in a Tuesday statement, that it would also follow the CDC and FDA recommendations while trying to accommodate as many existing appointments as possible. Those who received the vaccine from Kaiser, the statement said, will receive information about the situation and what symptoms to be aware of.

“As the federal government has said, we do not expect a significant impact to our vaccination allocations,” Pan said. “In California, less than 4% of our vaccine allocation this week is the Johnson & Johnson vaccine.”

The city of Los Angeles, though, said Sunday it still had 15,000 doses of the vaccine on hand.

City Councilman Joe Buscaino said Tuesday morning that the city’s mobile vaccination site in Wilmington had been set to administer the Johnson & Johnson vaccine, but will use the Pfizer vaccine instead. The same switch will be made at other city locations, including the large-scale site at Cal State Los Angeles, which the city began operating this week after taking over for the Federal Emergency Management Agency.

In Long Beach, the largest city-run vaccination site won’t be affected this week, officials said in a statement Tuesday morning. None of the people with appointments at the Long Beach Convention Center this week, the city said, was scheduled to receive the Johnson & Johnson vaccine.

But Long Beach officials, the city statement added, will contact those scheduled to receive the Johnson & Johnson vaccine at mobile clinics and offer them Pfizer or Moderna inoculations.

The city’s statement did not say how many doses of the Johnson & Johnson vaccine it had on hand.

Pasadena, however, said they will hold on to about 500 Johnson & Johnson vaccine doses until there is more information available.