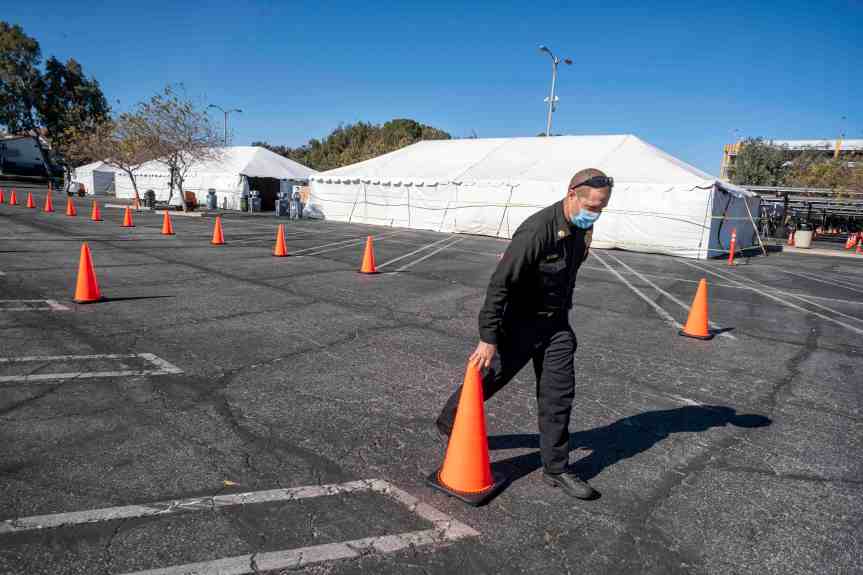 As debate over the slower-than expected rollout heated up anew, Los Angeles County Board of Supervisors Chair Hilda Solis on Monday, Jan. 18 ordered that coronavirus vaccines be made available to residents 65 years of age and older beginning Thursday, Jan. 21.

“The COVID-19 vaccine rollout has been an enormous undertaking, especially during an unprecedented surge where cases, hospitalizations, and deaths continue to skyrocket,” said Solis in a statement that accompanied her executive order. “However, if we are to ever get out of this dark winter, it is critical that we make headway vaccinating people 65 years of age and older as soon as possible – in line with Governor Gavin Newsom’s recommendations.”

Details were not yet available for how seniors could sign up, but the order directed county health officials to provide additional information for eligible residents. In the meantime, officials urged residents to visit VaccinateLACounty.com to sign up for email alerts.

Meanwhile, county public health officials prepared to unveil five more large vaccination centers Tuesday morning, while maintaining until Monday that the current supply of vaccines isn’t sufficient to widen the rollout. Health officials have so far limited vaccines to healthcare workers and residents of long-term care facilities even though the state will allow the expansion.

The rare executive order from the county board chair came as fellow Board of Supervisors Janice Hahn and Kathryn Barger urged health officials to open up vaccines for older residents.

“As the biggest county in the nation, I appreciate the massive undertaking it will be to vaccinate 10 million people twice,” Hahn said in a letter. “However, the vaccine rollout has not gone as quickly as it needs to.”

The comments from the pair amplified recent confusion — and frustration — among seniors seeking the vaccine.

“Governor @GavinNewsom has encouraged all counties to start vaccinating residents 65 and older so that we can protect our residents who are most vulnerable to this virus. L.A. County needs to follow the State’s lead without further delay,” Hahn tweeted.

The disagreement between supervisors and leaders of the Department of Public Health erupted as a few hopeful signs emerged Monday that the pandemic could be starting to wane a bit — though it was too early to know for certain whether the county would still see another surge in new cases, hospitalizations and deaths related to the New Years and Christmas holidays.

County health officials reported 9,927 new cases of COVID-19 and 88 additional deaths on Monday. While the numbers are the lowest they’ve been in a while, officials cautioned that figures reported Monday reflected a reporting lag over the weekend and holiday. A total of 13,936 people have died from COVID-19 and 1,024,190 people have tested positive for the virus since the pandemic began.

Hospitalizations continued their very gradual decline Monday. The total number of people being treated for COVID-19 in L.A. County hospitals continued to dip, to 7,322 on the state dashboard, which updates a day before the county’s. Roughly 23% of hospital patients with COVID-19 were in intensive care units.

Peak hospitalizations occurred in the first week of January at more than 8,000. The county has 2,500 licensed ICU beds but hospitals have flexed to accommodate more patients.

The county’s daily report did not include updated numbers from Long Beach and Pasadena, which operate their own health departments. Long Beach did not report updated figures over the weekend and on Monday; but as of Friday, the city had posted 42,888 confirmed cases and 520 total deaths. In Pasadena, officials reported 107 new cases for 9,339 total and one new death for a total of 192 deaths from COVID-19.

The county has so far vaccinated primarily hospital healthcare workers, but on Monday said it had administered first doses to residents and staff at 335 of the county’s 340 skilled nursing facilities — amounting to 39,000 doses in total. The proportion of deaths occurring among residents at nursing homes has dropped from 50% last summer to under 7% this winter, according to the health department.

Officials plan to hold a town hall meeting live on Twitter, Facebook and Youtube at 6 p.m. Tuesday, Jan. 19, to discuss in more detail the vaccine rollout.

There were already signs that the vaccination effort, although slow going so far, was having its intended affect. The L.A. County Fire Department reported Monday that it had experienced a drastic decline in test positivity rate and number of individuals out with COVID-19. A big reason for the improvement, said Fire Chief Daryl L. Osby, was the department’s 75% acceptance rate of the COVID-19 vaccine.

“With the second dose of the vaccine now being given to our team members, this will provide another layer of protection and allow us to continue to seamlessly provide the highest level of care to our patients,” Osby said.

Fire Department paramedics have been a big part of the response to the ongoing pandemic as they are often the first to arrive when someone is sick at home. Ambulances have experienced long wait times at hospitals, which county officials have worked to alleviate with outdoor triage tents and other treatment strategies.

In Pasadena, officials will inoculate 1,800 seniors and medical workers in a pair of vaccination clinics this week, run by the city’s independent health department. City spokeswoman Lisa Derderian said signups for seniors seeking a vaccine were “gone within hours.” The city is still several weeks away from having enough doses to vaccinate those over the age of 65, she said.

Long Beach began giving vaccines to people 65 and older over the weekend.

L.A. County was poised to open five more large-scale vaccination centers Tuesday morning, where more than 1,000 doses per day are pexpected to be provided at peak levels. The five additional sites are located at the Pomona Fairplex, The Forum, California State Northridge, L.A. County Office of Education in Downey and Six Flags Magic Mountain in Valencia.

On Friday, the county opened its largest vaccination center at Dodger Stadium capable of inoculating more than 10,000 per day.

It’s unclear when the sites will be able to operate at full capacity. On Friday, Dr. Paul Simon, the county’s chief science officer, said the amount of vaccine the county gets from the federal government, via the state, is unpredictable, making it hard to plan for the longer term.

“We don’t know week to week how much vaccine we’re supposed to get,” he said, noting that the officials hope to begin vaccinating seniors by the beginning of February. But even that was not guaranteed, given the unpredictability.

On Friday, during the opening of the Dodger Stadium site, Newsom responded to some confusion in the state’s initial announcement about seniors.

State officials were adding flexibility into the tier system that prioritizes what segments of the state’s population get vaccinated and when, he said. That priority would allow some segments other than healthcare workers — such as seniors and teachers — to be vaccinated, rather than to have doses go unused.

“We don’t want to see any vaccines wasted,” Newsom said.

But because the state defers to counties and local health departments to implement such measures, some counties and municipalities are moving more quickly than others to get seniors vaccinated.

“The reality is, we’re many parts but one body,” he said, adding that the “vast majority of counties are moving in that direction.”

California continued to rank as among the bottom 10 slowest states in administering vaccines — with L.A. County, with more than 10 million people to inoculate,  among the slowest.

L.A. Unified School District Superintendent Austin Beutner made another effort to offer the district to administer the vaccine in a letter sent to state and county public health officials Monday.

“A critical part of reopening school classrooms will  be creating a safe school environment including providing vaccinations to people who work in schools,” Beutner wrote in his letter to  Dr. Mark Ghaly, secretary of the California Health and Human Services Agency, and to Barbara Ferrer, the Los Angeles County public health director.