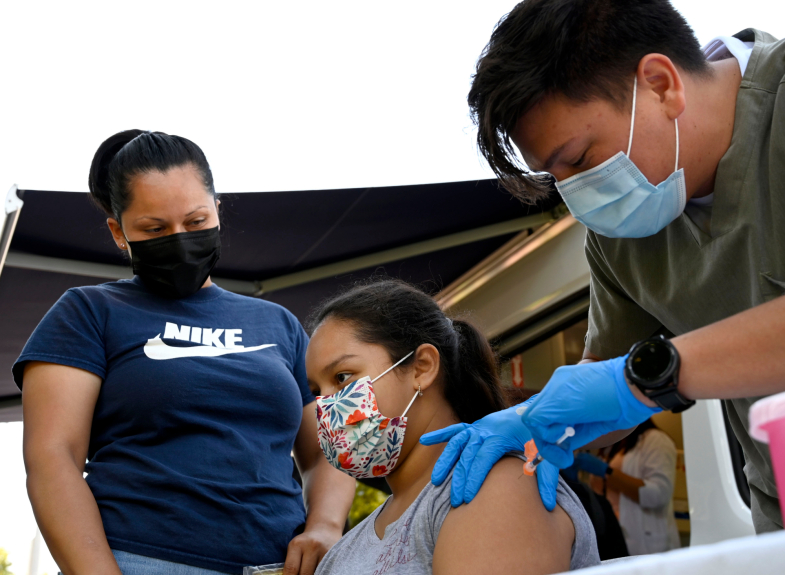 It was the highest number of cases reported in one day in more than six months. In a bit of good news, however, Saturday’s test positivity rate was 4.7%, down from 5.3% Friday and last week’s rate of 6.3%.

Routine testing programs are increasing at businesses and schools, and there will be quicker identification of asymptomatic people infected with COVID-19, according to the Los Angeles County Department of Public Health. Staff will be contacting all people testing positive to ensure they are isolating for 10 days and identifying all their close contacts who will be notified of the need to quarantine, the department said.

The number of coronavirus patients in Los Angeles County hospitals also grew again, increasing by 50 to 1,433 — the most since the beginning of March. That number includes 329 people in intensive care, an increase from the 303 reported on Friday, according to state figures.

Saturday’s figures brought the county’s totals to 1,323,345 cases and 24,769 fatalities since the pandemic began.

Health officials have attributed the sharp rise in infections over the past two months to the a highly infectious Delta variant of the virus that was first discovered in India.

“With increased testing, our case numbers are likely to rise until we significantly reduce community transmission,” Public Health Director Barbara Ferrer said. “While indoor masking and quarantine and isolation of cases and close contacts are effective strategies for reducing transmission, the quickest way to slow the spread is to increase vaccination coverage. Today, as I worked with our team at the Obregon Park vaccination clinic, I was encouraged to see so many teens coming in to get vaccinated. All these newly vaccinated teens contribute to the safe re-opening of schools and get us closer to community immunity.”

Ferrer said Thursday that the rate of daily new infections and the testing-positivity rate were both down noticeably from last week, offering some hope that the surge in cases is beginning to level off.

“… While we’re still experiencing a significantly high case rate, a little more than two weeks ago at the time of our recent health officer order requiring universal masking indoors, we also noted that our cases had doubled every 10 days,” Ferrer said. “What we’re seeing now is a much smaller increase in our cases over a couple of weeks, which is what we’re hoping for 10 days after implementing an effective public health measure.”

Ferrer said that on Aug. 1, the county had seen a 22% week-over-week increase in new cases — while the increase in the rest of the state was 57%. That’s a sign, she said, that Los Angeles County — which implemented a mandatory indoor mask-wearing mandate in mid-July — is now seeing slower transmission of the virus.

Ferrer said it was too early to say if the mask requirement is responsible for the county’s improvement, “but I know for sure it contributed.”

She also noted that the county has now seen three consecutive weeks of increases in the number of people receiving a first dose of vaccine, following months of declines.