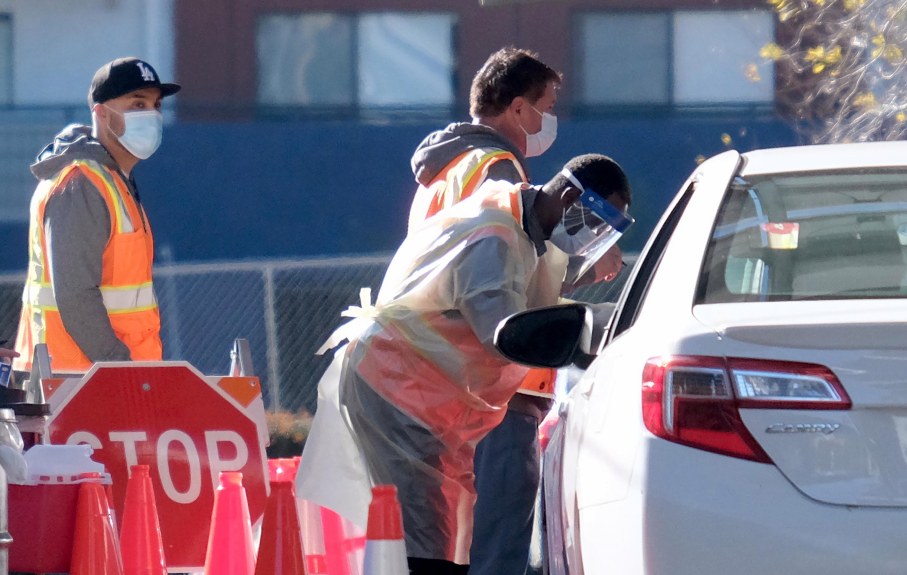 Just one week away from expanding eligibility for the coronavirus vaccine by up to 1.8 million people, Los Angeles County officials are worried the online system required by the state to book appointments will continue to pose challenges in communities hit hardest by the pandemic.

Board of Supervisors Chairwoman Hilda Solis said on Tuesday, Feb. 23, that she was “not surprised,” but nonetheless “disgusted” by certain people using any means necessary to obtain vaccine doses.

“I can tell you I was very alarmed to hear that individuals had gained access from the code given hours before the pod was set up,” Solis said, describing a vaccination site at a public housing facility in Boyle Heights intended only for seniors who live there. “And somehow they were able to get in line ahead of the people this was intended for.”

Among those who came to the public housing facility to receive a vaccine dose was a resident of Beverly Hills, Solis said.

Officials and reporters have noticed for weeks that people receiving doses at certain vaccination sites were coming from areas all around the Southland and not necessarily from local neighborhoods the clinics were intended to serve.

Supervisors Janice Hahn, District 4, and Sheila Kuehl, District 3, said it was not right to vilify those who desperately want a vaccine — while stopping short of defending such actions.

“People are scared,” Hahn said. “We wouldn’t have communities competing against one another if we had more vaccines.”

The ability to create what public health officials call “closed sites” — where they can designate appointments for only certain people, such as residents of a local neighborhood — has stumbled, spurring officials to raise the issue with vaccine-appointment website administrators.

The issue is far from resolved. The best solution offered has been to use access codes. Though, as in the case in Boyle Heights and elsewhere, those codes get leaked and used by others.

“Here we are again in a situation where the lack of access to the internet is leaving people behind,” Solis said. “And there are those who don’t have the ability to sit at home and work on the internet because they have to go out and work to put food on the table. I am reminded that this is a society of inequitably and I hate to say it but discrimination.”

The online appointment system has contributed to the unequal distribution of the coronavirus vaccine, Solis said, which has resulted in lower rates of vaccinations in the densely populated communities of color that are among the hardest hit by the virus.

If not fixed soon, supervisors worried that the problems may snarl efforts in the next push to vaccinate up to 1.8 million more people, including teachers and other essential workers.

Ferrer laid out a plan Tuesday to administer vaccines across a vast network of school districts, public-safety agencies, childcare providers and food/agricultural workers. Much of the plan involves expanding on partnerships with health clinics, hospitals and pharmacies to vaccinate populations of teachers and other essential essential workers, possibly bypassing the state appointment system that has been so problematic.

The plan for L.A. County schools was being worked out by the L.A. County Office of Education. In many cases, it involved several school districts working together and an offer for private and parochial schools to join in those distribution sites as well.

At primary issue is the state’s MyTurn.Ca.Gov website which Dr. Christina Ghaly, Health Services Director said on Tuesday not only had limited capabilities to restrict appointments, but it also created a bureaucratic headache when entering required data because the site was not interfaced with the county system.

County officials were scheduled to meet later this week with leaders at Blue Shield of California heading up efforts to coordinate vaccine distributions going forward. County officials said they did not have assurances yet the system would account for local disparities, such as the patients that often fall under the care of Department of Health Services, according to Ghaly.

“It’s important that DHS can continue to focus on its patients,” Ghaly said. “If we aren’t able to reserve appointments for our patients we are concerned they will be pushed out by those with more resources, more time to sit before their computer screens, and they have the ability to drive anywhere to get a vaccine.”

While challenges exist, Ghaly said the county was working hard with state officials to find resolutions.

Plans the insurance carrier have rolled out elsewhere to administer vaccines relied on a handful of partners, officials said. But that will not work in sprawling L.A. County — with roughly 10 million residents — where officials are advocating to use the county’s existing system. The network already includes more than 400 vaccine providers.

“One possibility would be for the county to maintain this network we’ve created with smaller partners and we would end up keeping the responsibilities we have now,” Ferrer said. “They (Blue Shield) are insistent there be responsibility for getting doses into people’s arms and not holding vaccines form one week to the next and using the data system. But we may need to be looked at differently.”

So far, the county has administered nearly 1.8 million vaccine doses, including first doses for 80% of the roughly 2.2 million eligible adults.

A shipment of 26,000 doses that was supposed to arrive a week ago got stuck in Kentucky due to bad weather, while another 37,000 doses set for use at vaccine sites this week got stuck in Tennessee.

Casting a shadow over the process is the consistently thin, sporadically delivered supply from the national stockpile. The county’s network has capacity for almost 500,000 slots per week but only had the supply for a little more than 200,000 last week, Ferrer said. Weather woes in the South and East delayed last week’s shipments and forced the closure of the L.A.-city operated clinics for several days. The clinics, including mammoth centers at Dodger Stadium and Pierce College, were reopened Tuesday ad the supply line solidified anew.

“While we don’t have the supply right now, we will in the future,” Ferrer said. “We feel very lucky to have this expensive network across the county.”

At the core of the county’s efforts to get more people vaccinated are public outreach programs. Officials sought to expand those efforts in communities hardest hit — such as Antelope Valley, South L.A. and Boyle Heights — were thousands of doses have been reserved.

But much of the effort will still come down to education and outreach, they said, aimed at people unaware of the vaccines or mistrustful of government. That’s why officials have enlisted teams of volunteers and students to serve as ambassadors.

The key to the next stage of the vaccine rollout involves community partners, Ferrer said, which means more people will likely be getting vaccinated just as they would a flu shot at a pharmacy, clinic or health system.

“Everyone understands that’s the heart and soul of how we are going to accomplish getting people vaccinated in the months to come,” Ferrer said.