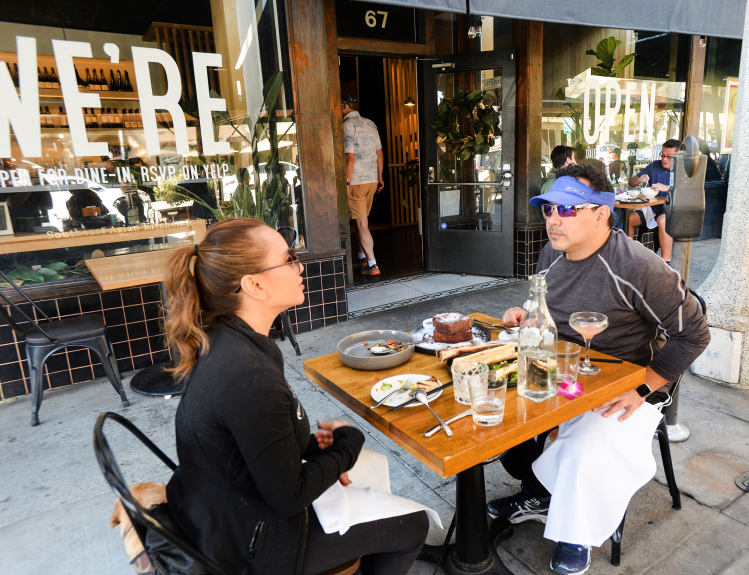 Los Angeles County will officially move into the state’s less restrictive red tier on Monday, March 15, signaling the reopening of a wide range of indoor activities such as in-school learning for grades 7-12, indoor dining at restaurants, plus movie theaters, gyms, museums, zoos and aquariums, all with limited capacity.

The county will be allowed to advance quicker into the red tier as the state announced Friday, March 12, that it reached a benchmark of administering at least 2 million vaccine doses to underserved communities.

“This is welcome news, especially as many of our small businesses have borne the brunt of the financial fallout from this pandemic, and as our students struggle to keep up with distance learning,” said Los Angeles County Board of Supervisors Chair Hilda L. Solis, Supervisor to the First District. “We have achieved this milestone and moved down to the red tier because as a County we worked hard, looked out for one another, and came together to defeat the dark winter surge.”

Under the modified state guidelines issued last week, as soon as 2 million doses of vaccine doses were administered to the hardest hit communities, the state lowered the case rate threshold to advance from the purple tier to the red tier. Further benchmarks will be loosened to enter the orange and yellow tiers once the state reaches 4 million doses to these communities,

A county can move from the state’s most-restrictive purple tier to the the less-restrictive red tier if the new daily case rate is under 10 per 100,000 population, rather than the current 7 per 100,000, for at least two weeks. Counties that already meet the new benchmark could officially enter the red tier 48 hours after the state passes the vaccination target, state officials say.

L.A., Orange and San Bernardino counties were among 13 counties statewide which have each fallen below 10 cases per 100,000 people for the past two weeks and could enter the red tier as early as Sunday.

Riverside — which has spent just one week so far under 10 cases per 100,000 — would need to wait until at least Tuesday, March 16, when daily case rates are reported next to qualify for the red tier and could reopen sectors as early as Wednesday. Another 12 counties statewide are at a similar place.

“Today an important milestone was met as we’ve been forecasting, we’ve hit 2 million doses of vaccine in our lowest quartile communities, led by equity and moving based on equity, we made some modifications to the blueprint,” said Dr. Mark Ghaly, California Health and Human Services Secretary.

Ghaly said the state chose to focus on the lowest quartile communities based on the state’s Healthy Places Index because it pinpointed areas with the least resources that correspond to places with the highest case rates and deaths.

“We continue to believe the blueprint has some of the strongest public health protections in the nation and as we move forward and a series of counties begin to see their case rates drift upward we will continue to have the protection of the purple tier above a case rate of 10,” Ghaly said.

Officials from Pasadena, a city which operates its own health department, said they will align with county on its red-tier directives.

On Thursday, Long Beach Mayor Robert Garcia announced that his city — which also operates its own health department — would largely align with the new state regulations.

State officials Thursday also loosened rules on breweries, wineries and distilleries while setting a path toward reopening bars. The move would still need to be accepted at the county level.

According to the updated rules, beginning this Saturday, breweries, wineries and distilleries that do not serve meals will be permitted to reopen outdoors in counties that are in the restrictive purple and red tiers of the four-tier Blueprint for a Safer Economy. Customers must have advance reservations and will be limited to 90 minutes, and all on-site alcoholic beverage consumption must end at 8 p.m.

Rules for restaurants under the red tier, according to public health officials, that will launch Monday in L.A. County:

Other newly permitted activities can include: