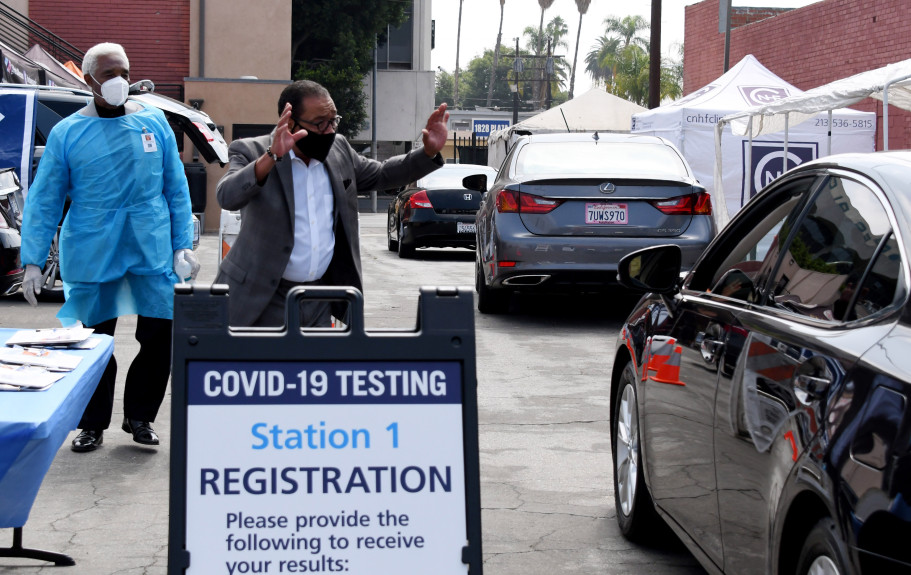 “While one day of a high number of cases does not indicate a trend, this is something we need to watch closely,” Ferrer said.

The county has been struggling to lower its daily case numbers in hopes of moving out of the most restrictive tier of the state’s four-level economic reopening matrix, which would allow more businesses to reopen. While the county’s recent testing positivity rate, currently 2.8%, actually qualifies the county to move up two steps in the matrix, the rate of new cases per 100,000 residents continues to remain elevated, currently averaging 7.4, a slight increase from last week.

The county’s average new case rate needs to fall to 7 per 100,000 residents in order to move out of the state’s restrictive “purple” tier. That equates to roughly 700 new cases per day — well below the 1,645 reported Wednesday.

Ferrer noted that the county’s recent daily average case numbers have fallen to levels not seen in late April and early May, so Wednesday’s spike could prove to be an anomaly, so health officials will be closely watching testing results in the coming days.

“We need to continue to try to reduce our case numbers, and we do this by protecting workers, wearing our cloth face coverings, maintaining a 6-foot distance and washing our hands,” she said. “This would be the way we have in front of us now to reduce transmission rates even while we reopen additional sectors.”

She also said that while the testing positivity rate has been falling and remains low, it has leveled off in recent weeks at about 3%, and “we do also need to start seeing this number decrease as well.”

After months of closure, indoor shopping malls were permitted to reopen Wednesday, albeit limited at 25% of capacity and with food courts and common areas remaining closed. That follows nail salons, which were permitted to reopen indoors last week; card rooms, which were allowed to open outdoors on Monday; and outdoor playgrounds, which were cleared to reopen at the discretion of individual cities. The county this week also began accepting waiver applications from schools that want to offer in-person instruction for pre-kindergarten through second-grade students. Ferrer said about 26 schools have submitted waiver requests so far.

Customers must be seated at tables, and they must make a reservation at least one day in advance, under the health order.

County health officials had been hesitant to allow breweries and wineries without in-house food service to reopen, noting that they are essentially bars that could attract large crowds. Brewery owners lobbied for the chance to reopen, saying it was unfair to treat them differently from breweries that have their own kitchens, and insisting they could adhere to the same rules requiring food service, social distancing and sanitation.

The county Board of Supervisors last week voted 3-2 to allow the breweries to reopen, despite no recommendation from health officials to allow such a move.

The apparent opposition of health officials to the brewery openings is made clear in the guidance released Tuesday authorizing their operation, with the first sentence stating, “This order is directed solely by the Board of Supervisors.”

Bars across the county remain closed, except in Long Beach, which this week allowed them to reopen with outdoor operations if they partner with a third-party food provider and link all alcohol sales to food purchases. Long Beach has its own health department separate from the county.

The 1,645 new cases reported Wednesday lifted the countywide total since the start of the pandemic to 277,445.

Hospitalizations in the county related to the coronavirus were at 696 as of Wednesday, up from 685 on Tuesday and 674 on Monday.

Ferrer stressed that the number of hospitalizations has been trending downward for weeks, now sitting well below the July averages of about 2,200 a day.

“It’s good news and we believe it reflects both improved therapy and care for patients with COVID-19 that may lead to shorter lengths of stay, as well as the fact that we know we have a much younger population of residents who are infected now, and they may be less likely as a group overall to require hospitalization,” Ferrer said.