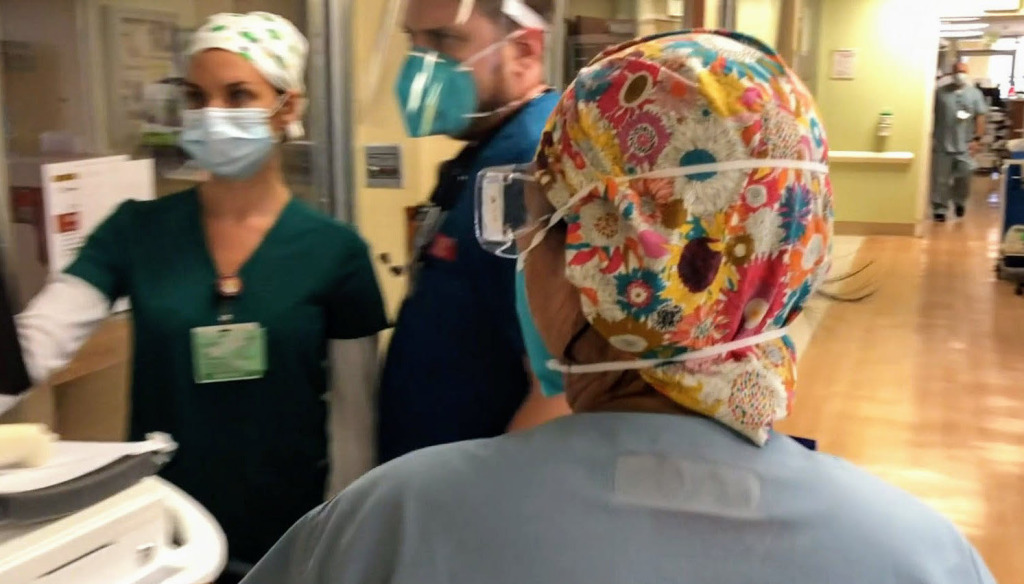 If the rising rate of coronavirus cases continues unabated, Los Angeles County could see yet another surge in hospitalizations, potentially threatening — like previous onslaughts of serious infections — to cripple the health care system, local medical center officials said this week, with the soon-to-be-reimposed mask mandate providing only a measure of comfort to the doctors and nurses now preparing for the worst.

The reality the county faces, multiple officials said, is that a potentially overwhelming spike in COVID-19 patients could come down to a numbers game.

While nearly 70% of LA County residents who are at least 16 years old have had their first dose or are fully inoculated, the rest of the population may prove perpetually resistant to getting vaccinated, health officials said. And in a county with 10 million residents, that remaining 30% is more than large enough to overrun hospitals, even accounting for infection rates still much lower than during the height of the pandemic.

“With the Delta variant being transmitted with more efficiency, the risk is much greater,” said Dr. Roger Lewis, professor and chair of Harbor-UCLA Medical Center’s Department of Emergency Medicine. “I think we’re at risk for a surge that could be quite significant if we can’t do anything to slow transmission.”

In LA County — and the state and the country — the vast majority of newly infected people are unvaccinated. And perhaps most concerningly, officials said, is that the data since the Fourth of July has followed the trends of previous post-holiday surges, with hospitalizations currently lagging behind cases, but also rising. And, those doctors say they fear, increasing deaths may not be far behind.

“The spike is adhering to a familiar pattern,” said Dr. William Wang, chief medical officers at Glendale Memorial Hospital. “A holiday, an easing up on restrictions, and then two weeks later, cases spike.

“That’s been the pattern in the previous three waves,” he added, “and that’s what been happening since July 4.”

And the recent announcement from the county Department of Public Health that it would once again require nearly everyone to wear masks when indoors at public places, regardless of vaccination status, underscores the seriousness with which officials are taking the current case increase.

Taken together, the slow upward creep of coronavirus data and slowing vaccination rates could portend another cycle in what has become a Sisyphean struggle to subdue the pandemic.

“Every physician or LA health provider is absolutely concerned,” said Dr. Hector Castillo, a family medicine doctor affiliated with the California Hospital Medical Center, in Los Angeles city. “Especially those on the front lines, having seen everything that took place with caring for sick patients, to losing colleagues.”

The most effective measure to slow the spread of the virus is getting vaccinated.

But the remaining eligible population has been stubbornly difficult to persuade. And vaccination rates have slowed as a result.

On April 24 — a little more than a week after those at least 16 years old became eligible for the vaccine — 30% of residents were fully vaccinated. Three weeks later, on May 15, that had increased to 40%. During the first three weeks of July, by comparison, the fully vaccinated population increased from 59% of county residents to 61%, as of Thursday, July 15.

Each day this week, the county has reported more than 1,000 new cases — with Friday’s numbers nearing 2,000.

And nearly all of the cases and hospitalizations the county has seen recently have been among the unvaccinated. Those testing positive despite being fully inoculated, the data shows, is statistically insignificant — sixth-tenths of a percent.

“The current increase in COVID-19 infections and hospitalizations is of concern for all of our communities and the delta variant appears to be the main reason for this worrisome trend,” said Dr. Nancy Gin, an internist and regional medical director for quality at Kaiser Permanente Southern California. “It is especially alarming that the individuals who are currently getting sick with COVID-19 are overwhelmingly those who have not been vaccinated.”

Gin, however, noted that the county is nowhere near previous surge numbers, particularly the one following the winter holidays, when intensive-care unit capacity dipped near 0%.

“Although we are nowhere near the previous surge numbers that nearly overwhelmed our hospitals and ICUs at the height of the pandemic last winter,” Gin said, “we share public health officials’ concerns.”

Other medical professionals were more blunt.

That includes both family medicine physician Castillo and Dr. Suman Radhakrishna, director of infectious disease California Hospital, operated by Dignity Health. That facility, Castillo said, has been readying for another surge by preparing their personal protective equipment, ventilators and “everything else that goes into taking care of coronavirus patients.”

The medical facility, Radhakrishna said, is well-equipped for the worst.

“We are always prepared for another surge,” Radhakrishna said. “We are providing care to individuals who need services, but at the same time we’ve learned from our experiences from the last surge. We are ready to deal with it.”

LA County Health Officer Dr. Muntu Davis on Thursday — when he announced the impending mandate — described the situation as “an all-hands-on-deck moment.” He also pointed out the flaw in the post-June 15 rules allowing vaccinated folks to forgo masks entirely.

“I don’t think, in general, that self-attestation is actually good in” this circumstance, he said.

The rest of California, by and large, still only recommends masks indoors regardless of vaccinations status, including Orange County and San Francisco. (Long Beach, which has its own health department, has said it will align with LA County’s new mask rules. Pasadena, which also has its own department, said it will assess a possible mandate but was keeping face coverings a recommendation for now.)

Davis on Thursday called the tougher rules the best option at the moment.

“This is probably one of the more effective” strategies, he said, “as well as the least limiting in terms of business operations.”

But medical professionals seemed unsure of whether it would be enough.

“Reestablishing the mask policy will help because you will diminish transmission of the virus for those who have not been infected,” Castillo said. “But ideally, if you’ve not had infection — at minimum — it still would make it very challenging to get a handle on the virus because its so transmissible.

“Its become an organism,” he added, “that finds its way and makes itself better by the day to infect easier.”

Wang, from Glendale Memorial Hospital, said that it seems unlikely the county can inspire the vaccine-hesitant to roll up their sleeve and get the shot — let along those ardently opposed to it.

And, Wang added, the paramount goal of herd immunity may already be out of reach.

“I don’t think we will get there,” he said. “There’s just a group of people who we are not going to be able to convince no matter what happens.”

Dr. Robert Kim-Farley, a professor at the UCLA Fielding School of Public Health, said health officials need to reassure folks the vaccine is safe and effective — it is, experts and studies have repeatedly stressed — and appeal to people’s better angels.

“The challenge now is to reach people who are vaccine hesitant, to answer their queries and appeal to their sense of being a good citizen,” Kim-Farley said. “People have to take on a civic duty here to say it’s not just about myself.”

But if not, Wang said, there will be a certain irony to the Sisyphean struggle to defeat the coronavirus:

Other diseases, such as smallpox and measles, he said, were essentially wiped out decades ago because of vaccinations. Today, there are three vaccinations — Moderna, Pfizer and J&J — that could help eradicate yet another deadly disease.

And, Wang said, some people still won’t get it.