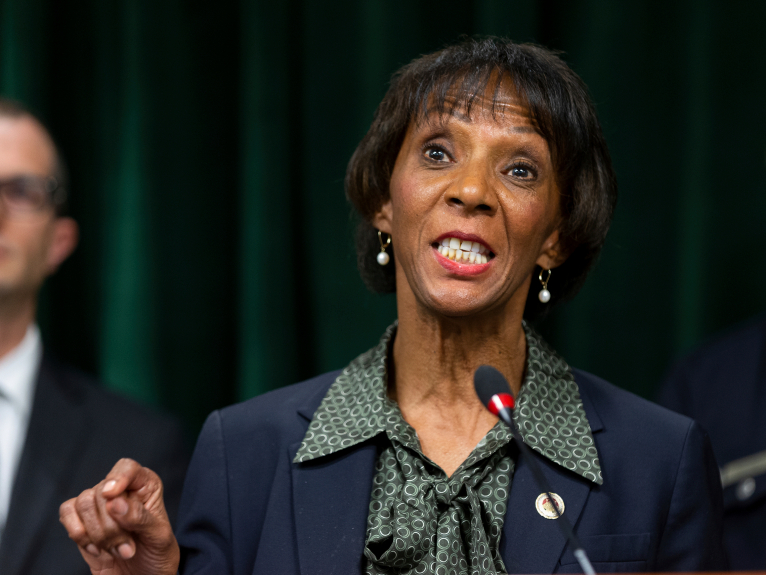 A Black senior investigator with the Los Angeles County District Attorney’s Office who alleged in a lawsuit she was sexually harassed and discriminated against by a White supervisor and then faced retaliation after reporting him was awarded a $950,000 settlement Tuesday.

The Los Angeles County Board of Supervisors approved the payout to Regina Crenshaw, a 21-year veteran of the District Attorney’s Office, noting on its meeting agenda she was subjected to gender and race discrimination. The agenda did not mention the sexual harassment claim detailed in Crenshaw’s 37-page lawsuit filed in 2017 against the District Attorney’s Office and her former supervisor, Sgt. Jeff Hudson.

With Crenshaw’s award, the District Attorney’s Office will have paid out nearly $2 million since 2017 to settle sexual harassment-related complaints brought by employees against their bosses.

Crenshaw, who remains employed by the District Attorney’s Office, said she hopes her case will send a strong message to district attorney’s officials.

“I have been a victim of sexual harassment, discrimination and retaliation in the Bureau of Investigation for so many years,” she said in an email Tuesday. “As a woman of color, the administration dismissed my complaints and no punishment was administered to the aggressors. Lawsuits have been filed and more are to come.

“The office has the entire management staff and their sympathizers at their disposal to keep the aggression going. We need change in this office.”

“We encourage employees to come forward to report incidents of harassment and discrimination. We do not tolerate retaliation of any kind against employees who file claims,” she said in a statement.

Hudson, who has retired, could not be reached for comment.

Crenshaw, who was assigned to the Social Security Fraud Task Force, alleges the harassment began in November 2014 after Hudson became her supervisor. She said he regularly engaged in explicit, offensive language and gestures. On several occasions, Crenshaw said, she witnessed him speaking with and touching another female investigator in a sexually inappropriate manner, which made Crenshaw uncomfortable.

According to the complaint, a co-worker revealed that Hudson was constantly speaking about Crenshaw’s breasts in a sexual context. Crenshaw said that while Hudson did not mention her breasts to her directly, he constantly leered at her chest.

On March 10, 2015, Hudson requested that Crenshaw ride with him in a car because investigators are required to have a partner in the field, the lawsuit says. During the drive, Hudson allegedly stated he was distressed that his daughter dated Black men exclusively.

“Where did I go wrong with my daughter always dating only Black men?” the lawsuit quotes Hudson as asking. Crenshaw claims she was offended both as a woman and a person of color.

“Hudson stated that her butt size was inappropriate for the uniform,” the complaint says.

Hudson’s conversation with Crenshaw then shifted to the movie “Fifty Shades of Grey.”

“When Crenshaw informed him that she was not aware of the film and did not want to discuss it, Hudson insisted they discuss the movie and proceeded to vividly describe the film’s sexual content,” the suit stated. “Once again, Crenshaw was extremely offended.”

In another 2015 incident, Crenshaw went with a Latino investigator to pick up his vehicle from Hudson’s residence, according to the lawsuit.

Hudson, while standing in front of his residence, began criticizing Latino families who lived down the street because their homes were decorated in bright colors and ethnic designs. “They just mess up the neighborhood with all those colors,” Hudson allegedly said.

The Latino investigator and Crenshaw were offended by Hudson’s racist statement, says the suit. “As Crenshaw left (the residence), Hudson gestured at her with his middle finger on both hands,” according to the complaint.

When Crenshaw reported Hudson’s behavior to the D.A.’s Human Resources Division in April 2015, he was transferred to another department, according to District Attorney’s Office employees

Crenshaw was then subjected to on-the-job bullying from another senior investigator who is a friend of Hudson, the lawsuit states. She complained to her supervisor, Sgt. Dave Maro, but he failed to intervene and also began harassing her, the complaint alleges.

Crenshaw alleges the intimidation continued after she asked a friend to buff out a scratch on the bumper of her county-issued vehicle because she hoped to avoid a confrontation with Maro. Maro could not be immediately reached for comment.

The repair was detected by the county during routine maintenance and Crenshaw was placed on administrative leave for property damage.

In November 2016, after four months of home duty, Crenshaw was notified that the county intended to terminate her. “Her gun, badge, cellular phone, and county vehicle were confiscated,” the lawsuit says.

The county eventually allowed Crenshaw to take a 15-day suspension so she could retain the right to pursue her claims against the District Attorney’s Office.

Crenshaw returned to work in February 2017 and was assigned to Central Investigations, where she primarily performed background checks and expungements, a job usually reserved for entry-level investigators, soon-to-be retirees and other undesirables, the lawsuit says.

More than $2 million is settlements

Since 2017, Crenshaw is at least the fourth employee at the District Attorney’s Office to receive a hefty settlement to resolve sexual harassment-related complaints.

Veteran prosecutor Karen Nishita, who received unwanted advances from her then-supervisor, Deputy District Attorney Edward Miller, for more than 2 1/2 years was awarded $300,000 in 2019. Miller, best known for helping to convict seven municipal officials in the notorious 2010 Bell corruption scandal, was transferred from the health care fraud unit and demoted.

The county also agreed in September 2017 to pay $350,000 each to Deputy District Attorneys Beth Silverman and Tannaz Mokayef, assigned to the elite major crimes division, to settle a lawsuit accusing their supervisor, Gary Hearnsberger, of unwanted touching, offensive comments and sexually suggestive gestures. Hearnsberger retired about a week before the settlement was reached

Several deputy district attorneys say reporting sexual harassment can result in “career suicide,” with whistleblowers not receiving promotions as punishment or being assigned to far-flung offices in what is described as “freeway therapy.”

The District Attorney’s Office has declined to specifically comment on the allegations from prosecutors. However, Lacey, in a January 2018 email to staff, outlined her commitment to fostering a safe and professional work environment with the formation of an employee relations division.

“I want my employees to be reassured that no one in the District Attorney’s Office has been or will be punished for reporting improper workplace conduct,” said Lacey, the first woman and first Black district attorney in Los Angeles County. “We are committed to conducting thorough administrative investigations into each of these reported incidents and will take the appropriate action to ensure that we maintain a safe and professional work environment at all times.”