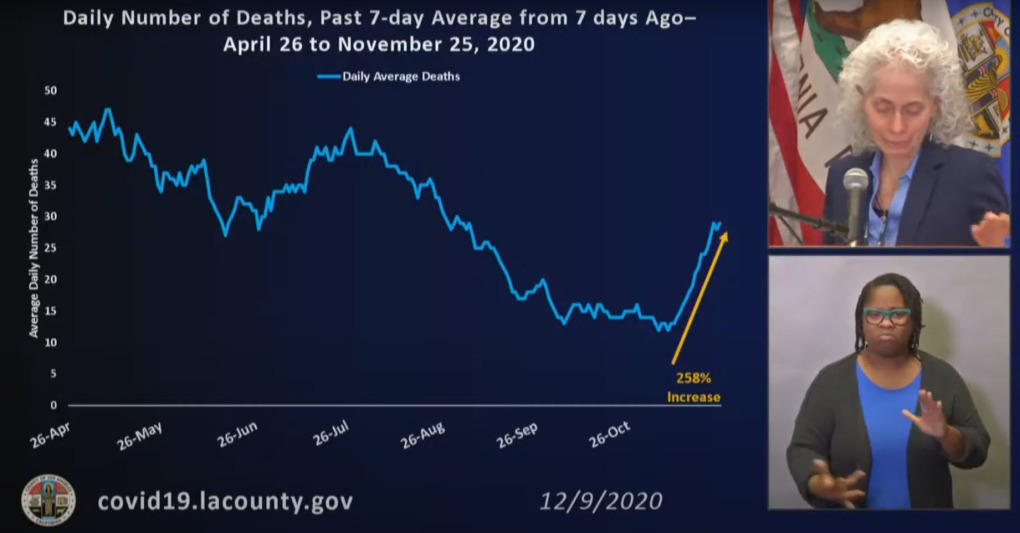 The move came after state officials faced a barrage of angry parents, demanding playgrounds stay open during the state-imposed stay-at-home order, which is in effect for Southern California through Dec. 26, though it could be extended.

During a press conference Wednesday, Public Health Director Barbara Ferrer said it was a difficult decision to make, striking a balance between children’s need for exercise and the risk of spreading the disease further.

County officials recognized that closing playgrounds disproportionately impacted lower income communities with little green space for kids, she said. But that doesn’t mean they’re encouraging parents to use them.

“This is one of those situations where we’re still recommending that parents not congregate at playgrounds,” Ferrer said. If there are lots of kids at your playground of choice, find a different one or come back later, she suggested.

“It’s not like the risk that we’ve been talking about has gone away at playgrounds,” she said, urging parents and caregivers to keep themselves and their children away from anyone who’s not in their own household.

Ferrer, for many the stalwart but compassionate face and voice of the fight against the pandemic in L.A. County, was briefly overcome with emotion while discussing the outbreak’s unrelenting human toll.

“Since these deaths reflect our case counts from a month ago, as cases have continued to increase these past few weeks, we will bear witness to a significant rise in the number of people who are dying,” Ferrer said.

“While this trendline provides a frightening visual of our reality, the more terrible truth is that over 8,000 people … ” Ferrer paused, looking away from the camera while catching her breath. Tears welled in her eyes. “Over 8,000 people, who were beloved members of their families, are not coming back. And their deaths are an incalculable loss to their friends and their family, as well as our community.”

Ferrer renewed the call for residents to heed officials’ guidelines to elude infection and stem the rekindled growth of the virus. Masks and physical distancing are still necessary, perhaps more than ever, as the county’s daily death rate continues to climb, reaching levels not seen since the summer peak, and threatening to surpass it in the coming weeks.

In early November, the county was averaging 12 deaths a day, Ferrer said. This week, county officials have seen 43 deaths each day on average, marking a 258% increase.

The county hasn’t seen this many deaths on average since mid-August.

The current surge started on Nov. 2, Ferrer said, and hospitalizations began increasing a week later. Deaths began to rise one week after that.

Right now, officials have said they fear a peak within a peak, as the county is just beginning to see hospitalizations related to cases acquired during Thanksgiving, according to Department of Health Services Director Dr. Christina Ghaly.

She warned that there could be a shortage of hospital beds soon and said facilities “will have to implement their surge plans over the next four weeks.”

Over the past two weeks, the county has seen an 80-90% increase in hospitalizations and new patient admissions are outpacing discharges, Ghaly said, as the county sees nearly 500 new hospitalization each day on average.

Thus far, 14 hospitals have requested additional staffing from the state, she said.

Ferrer urged the public to comply with health mandates, saying the only reason someone should leave their home is to use an essential business — or work at one — and to get exercise outside.

“Collectively, it’s up to us to stop the surge in cases that’s already stressing our hospitals and overwhelming our healthcare workers,” she said.

On Wednesday, Dec. 9, health officials counted 75 new deaths. A total of 8,075 people have died while infected with the virus in LA County since the pandemic began.

Additionally, officials reported 9,243 new cases on Wednesday; 475,271 cases have been tallied since the pandemic began, though many have since recovered.

The daily county update did not include the latest figures from Pasadena and Long Beach, which operate their own health departments. Pasadena reported 85 new cases Wednesday, bringing its total to 4,414; the city’s death toll increased by one, to 138. Long Beach reported 422 new cases, for a total of 19,608, as well as one new death, for a total of 288.

The recent spike in new cases marks a 300% increase in the average number of new daily cases, compared to rates seen in November, Ferrer said. Meanwhile, this week, the county has seen twice as many new cases on average as it had in the last week of November.

Many of these were in the southern and eastern parts of the county where the virus is spreading more rapidly, particularly among minorities such as Pacific Islanders and Asians, as well as Latinos and Blacks.

In the city of Rosemead, for instance, case rates per 100,000 people have increased by 456% throughout November, comparing two two-week periods against one another.

Though Rosemead saw a more dramatic increase than many other cities and neighborhoods, others weren’t too far off.

In the Century Palms/Cove neighborhood, there’s been a 410% increase; in Lennox, it’s 492%. Claremont has seen a 345% increase while Hawthorne saw a 313% increase. San Gabriel, meanwhile, experienced a 252% increase as Silverlake saw 264%.

“If you live and work in these communities, please know that many people who live and work around you are now infected,” Ferrer said.

Across the county, at this point, Ghaly said, “As many as one in every 100 individuals that you interact with in the community are infectious,” and two-thirds of those infections are from asymptomatic folks who feel fine.

“Keep in mind how risky basic activities with others are,” Ghaly said. “Things that were safe one month ago, or two months ago, are not safe. … The vaccine is around the corner but we can’t sit idly by.”

County officials have been concerned that when the vaccine arrives in LA County, it will be in short supply — as it will be everywhere in the country at first — and healthcare workers and residents in long term care facilities will be prioritized, Ghaly said.

Across the entire Southern California region, intensive care unit capacity slipped to 9% on Wednesday, a full percentage point drop from the day before.

State officials are using this metric to determine which regions are subjected to the most recent stay-at home order, which closed all nonessential businesses except for retail, barred private gatherings of any size, required masks and physical distancing at all times, and shuttered outdoor dining ventures, forcing restaurateurs to serve only takeout and delivery.

The order applies to regions with less than 15% capacity left in ICUs.

Southern California’s 9% remaining capacity is a little misleading, however, as state officials decided that hospitals should only have 30% of their ICU capacity taken up by coronavirus patients, Ferrer said.

If a hospital has more than 30% capacity filled by COVID-positive patients, “You get a penalty,” she said.

As of Sunday, Dec. 6, Los Angeles County had 46% of its ICU capacity filled with coronavirus patients.

The state’s latest stay-at-home order is expected to be in effect for at least another two weeks, though it can be extended if the region’s ICU capacity does not improve.