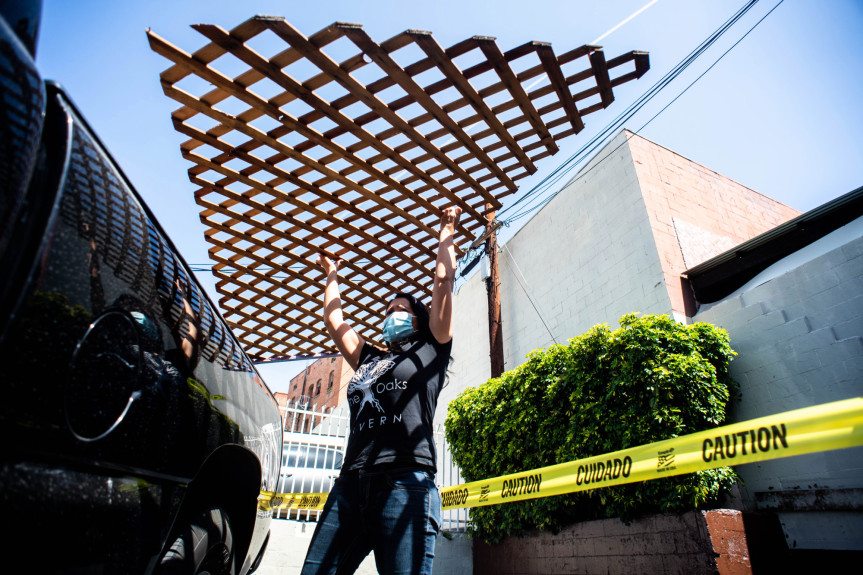 On a normal pre-pandemic day, The North End bar in Hollywood would play host to about 200 people. But nothing has been normal in the last year for Camila Perry, the bar’s co-owner, who runs the tavern with two other partners.

On Monday, April 5, as Los Angeles County entered the less-restrictive orange tier, she measured her patio, hoping to find space to set up at least seven tables outside.

“It’s kind of overwhelming,” said Perry, who also runs The Oaks Tavern bar in Sherman Oaks. “I have a little of a meltdown from the stress and the excitement and also the anticipation of what’s going to happen next.”

Perry is one of many bar owners for whom Monday marked a new milestone, allowing them to start welcoming patrons on their patios and hopefully see a much-needed boost in profit after being closed for nearly a year. Bars without a kitchen and those that didn’t partner with a food truck or another food operator have remained closed for months. But starting Monday, they were able to welcome patrons outdoors at 25% capacity until 10 p.m.

Experts say small businesses, which normally don’t have a cash cushion and sometimes rely on the owner’s personal savings to weather such a storm, have been harder hit by the pandemic than larger establishments.

Los Angeles has been suffering from the highest rate of permanently closed bars and restaurants, according to a recent report from Yelp.

Nearly 6,450 bars shut down in Los Angeles, with 54% of them listed as permanent closures, according to Yelp.

Nancy Hoffman Vanyek, chief executive of the Greater San Fernando Valley Chamber of Commerce, said “we’re happy that businesses are able to reopen and hire back their employees and people are able to go out and support those businesses while enjoying time with their families.”

But she said it’s “frustrating” for businesses to see some neighboring counties or cities have rules less restrictive than Los Angeles County.

“It would be helpful to businesses and helpful to consumers if we eliminate any confusion and we have one health order for everyone,” she said.

Since the news emerged about the new rules, Perry’s team has tossed around ideas about how to set up a patio, construct a temporary fence, hang lights — and make sure patrons “don’t feel like they’re sitting in the middle of a parking lot.”

In Long Beach, many bars adapted to the COVID-19 restrictions by partnering with neighboring restaurants for to-go orders.

At the Blind Donkey in Long Beach, co-owner John Bowers —also owner of a nearby restaurant, Burger Daddy— said that his bar’s patrons were able to order a to-go drink with food from the burger restaurant.

“There’s no way to sugar-coat it, the last year has been very very difficult,” he said. “We had to lay off our entire staff, we were essentially shuttered for a year, and there are bigger questions about what the future of the bar business looks like if lockdowns and social distancing really are the ‘new normal.’ We were quite literally talking about the death of an industry – an industry that just happens to play a big part in the culture of the city.”

He noted that the city, county, state and federal governments have all offered some sort of relief, but it hasn’t been enough.

“The small-business body count is enough to tell you more needed to be done,” he said. “And even though it looks like we’re coming out of it, the other shoe hasn’t dropped. I don’t know many bar and restaurant operators that aren’t months behind the rent.”

The Blind Donkey opened for sit-down patrons over the weekend. Bowers said that the room was packed— at least as packed as it could be while following Health Order guidelines.

“The turnout was great,” he said. “We’ve had to hold the door to keep capacity down, so there was more demand than we can legally accommodate.”

Like the Blind Donkey, other bars began offering food from nearby vendors in order to remain open.

The Grasshopper has been open for a month, featuring an outdoor patio and a small food menu.

“Our patio has been open since Long Beach gave us the option to partner with a food vendor to classify as a restaurant,” owner Ernie Cordova said.

Many cities across the county allowed bars and restaurants to set up tables outside and seat patrons on sidewalks and parking lots.

But the relaxed rules didn’t stay around for too long. Bars and restaurants were forced to shut down again a few weeks later as the COVID-19 cases mounted. Health officials declared that indoor bars — with their crowds, loud music and alcohol — proved an ideal ground for the virus to spread.

Perry’s Sherman Oaks location, The Oaks Tavern, reopened a few weeks earlier in February after she added a kitchen.

But the comeback didn’t come without challenges.

After she turned off the lights and closed the bar back in June, three of her refrigerators broke down. The 50-year-old bar, which Perry purchased about 10 years ago, needed other upgrades.

“I just kept writing checks and using my credit card,” she said, adding that she spent about $15,000 to build the kitchen.

Since the bar reopened, her sales went down 50% compared to pre-pandemic times, to about $30,000 a month.

But it “made it worth it,” she said, to have the kitchen area installed.

“It’s better than nothing,” Perry said.