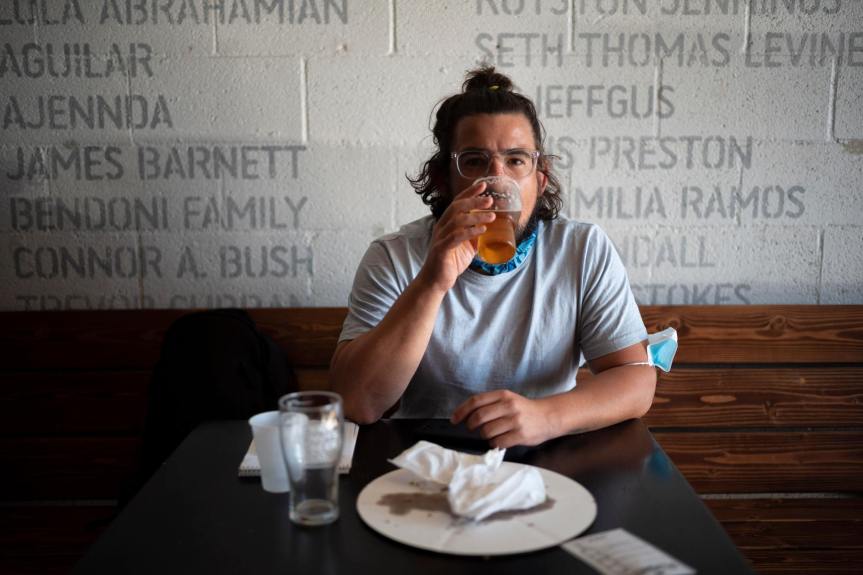 Jennifer Febre, the owner of MacLeod Ale Brewing Co. in Van Nuys, has been closely following government mandates since the first days of the pandemic, but the latest Los Angeles city and county orders — which will not match one another — requiring customers to show proof of vaccination have left her worried and confused.

“I do appreciate how putting this mandate in place is perhaps ratcheting up the pressure to persuade people to finally get vaccinated,” Febre said, adding that at times it feels like her employees are being “deputized as law enforcement officers… I am concerned about putting my staff in that role of being the enforcer.”

As the citywide mandates will go into effect Nov. 8, requiring patrons to show evidence of vaccination to enter restaurants, bars, coffee shops, breweries, wineries, gyms, spas, nail salons and barbershops along with movie theaters and shopping malls, businesses say the mandate will add another layer of complexity during the times when their resources are stretched thin as they deal with rental debt, rising costs and labor shortages.

The Los Angeles City Council passed the new mandate in early October and was expected to take effect Nov. 4, but the deadline was later pushed to Nov. 8.

Meanwhile, by Nov. 4, bars and other similar establishments throughout Los Angeles County will be required to verify full vaccination of all patrons and employees prior to entry to indoor portions of their venues.

The county’s health order, which is not as restrictive as the city’s new rules, requires proof of immunization mostly at indoor bars, wineries, breweries, distilleries, nightclubs and lounges.

Under the county rule, people who can’t provide proof of full immunization against COVID-19 by Nov. 4, should be served in outdoor portions of the facility. They are allowed, though, to use a restroom, make a delivery, pick-up, or order food “to go” while wearing a mask.

Some business leaders think the city rules go too far — and they are also worried that they do not align with the county rules, which they fear will spur confusion and frustration.

Sarah Wiltfong, senior policy manager at the Los Angeles County Business Federation, said the city mandate will put businesses at a competitive disadvantage as customers might opt for establishments in neighboring cities that don’t have similar laws.

“Businesses are doing the best they can,” she said, “but they are really confused and scrambling.”

Wiltfong added that many venues in the city “will lose businesses and it’s really unfortunate that the city has placed that them in that position.”

There’s a lot of lack of clarity within the city ordinance, Wiltfong said. Many hotels, which are not included in the mandate, have restaurants inside them. While unvaccinated people without a negative COVID-19 test can’t be inside the restaurant, they are allowed to enter the hotel.

“If you are a hotel, people can enter the hotel,” she said. “It’s the restaurant or the spa inside that needs to check for vaccination.”

Verifying customers’ vaccination status can be challenging for shopping malls, which have multiple entrances, and would need to figure out who is responsible for checking patrons at every entrance.

With the labor shortage, finding an additional employee might be a challenge.

Wiltfong said restaurants might have the hardest time finding additional staff as they are already grappling with hiring waitresses, waiters and line cooks.

After everything small businesses have been through during the pandemic, she added, “it’s the unfair position for the city to put them in.”

Wiltfong said the violation fines are “pretty excessive” for businesses in the city of L.A. that are still trying to keep their doors open and don’t want to turn away patrons who have been shopping with them for years.

Effective November 8, 2021, @LACity will require proof of vaccination or a negative COVID-19 test to enter most public indoor places. pic.twitter.com/4ctWBMv71C

While the majority of businesses were in compliance, “there is room for improvement with employee masking at garment manufacturers, office sites, bars, nightclubs and lounges, and customer vaccination verifications at bars,” according to county officials.

Officials said 73% of garment manufacturers and office sites, 82% of bars, 80% of nightclubs and 86% of lounges were in compliance with employee masking.

Febre said her biggest concern with the city rules is how she can make sure everyone in the restaurant had their vaccination status checked. Her restaurant has sections where customers can enter the room and sit down. To make sure her staff is not missing anyone, the employees will need to go around and check on every patron or put wristbands on them.

“It’s going to be a little bit difficult for us in terms of how we’re going to handle that,” she said, adding that she is hesitant about using armbands or wristbands because it would ultimately divide her patrons.

“If you’re sitting next to a table full of people that aren’t vaccinated and you can tell because you have a wristband and they don’t, all of a sudden you see all of your fellow patrons as ‘there’s a table of Democrats’ and ‘there’s a table of Republicans,’” she said. “It’s just really putting fuel on a fire and I don’t want that.”

When it comes to training her employees, her plan is simple.

“I’m going to tell them: ‘Check the ID, hand them the beer and you’ve done your job. Don’t walk around, patrol them and have conflicts with people.’”

Febre said the new rule “pushes the establishment-patron relationship to the max. I don’t want to be in an adversarial role with our customers.”

Luckily, the restaurant has enough outdoor seating, she added, and most people prefer to sit outside anyway.

Nancy Hoffman Vanyek, president and CEO at Greater San Fernando Valley Chamber of Commerce, said the purpose of the city mandate is to encourage people to get vaccinated, she said, “but who gets penalized for not checking is the business. It’s not the right message.”

Hoffman Vanyek said restaurant owners sometimes have to deal with negative online reviews from customers unhappy about health orders, which potentially can hurt their business.

Febres said she had instances when patrons were upset about a sign that encouraged unvaccinated customers to sit outside, left negative reviews on Yelp.

But she would rather deal with negative comments online, she added, than having upset customers “in the face of one of my staffers.”

Most of her patrons have been understanding so far.

Still, her staff is “a little anxious” about upcoming changes.

“One thing that annoys me about our government is that this whole pandemic they’ve been trying to figure out: ‘how can we solve this problem but not have to pay for it? How can we solve this pandemic but have the businesses pay for it?” She said. “You now have waiters, waitresses and bartenders having to be default line on making people get vaccinated and it just is not right.”

Some Harbor-area business owners, meanwhile, worry that the L.A. city vaccination mandates will hurt their establishments much like the ban on outdoor dining had done last year.

“We’re not the police, it’s not our responsibility to question whether people are vaccinated or not.”

The Omelette and Waffle Shop had been the site of a small protest during last year’s winter surge in coronavirus cases, where residents brought lawn chairs and tables to protest the county’s ban on outdoor dining.

“It was hard enough to get people to wear masks,” Jones said. “Customers were rude and upset with our employees.”

Checking vaccination status, Jones said, will be even harder especially with short staffing. While her establishment has remained a community fixture in San Pedro, Jones still worries that customers will flock to neighboring communities that do not have the same mandates.

“Here we are again losing volumes of people,” Jones said. “We’re still in recovery mode and this will certainly set us back.”

However, Sandra Hahn, who has owned Crepes and Grapes in Whittier since 2004, said the county rules haven’t been a problem so far.

“It seems everyone is wearing a mask,” Hahn said. “When you see somebody without a mask, it’s a shocker. I haven’t seen any complaints.”

Hahn, who also is chairman of the board for the Whittier Area Chamber of Commerce, said she also hasn’t heard of any complaints from other businesses.