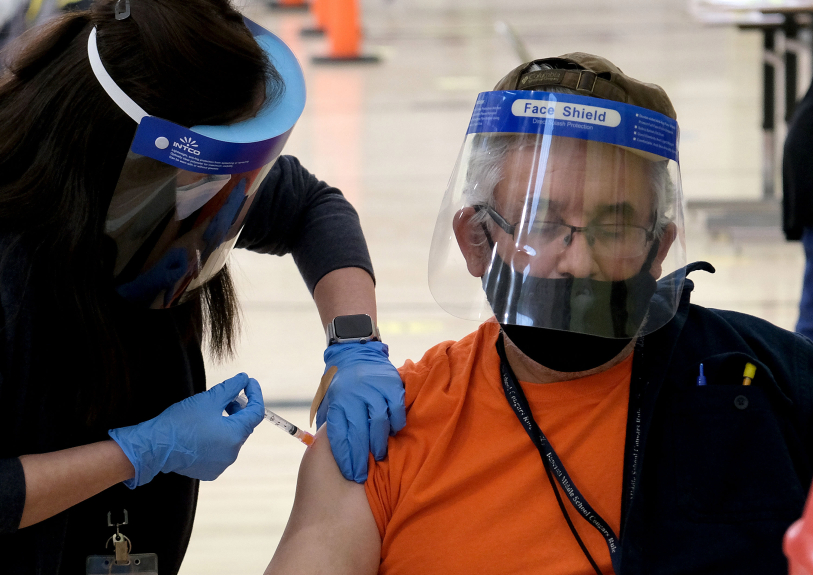 Mayor Eric Garcetti said Sunday, Feb. 21, that doses of COVID-19 vaccine delayed by the crippling storms in the East and South have now been shipped to Los Angeles, and all six city-run vaccination sites will resume operations on Tuesday, Feb. 23, after being closed through the weekend.

Garcetti said appointments from Friday and Saturday will be rescheduled immediately and those people will be notified by Monday. Residents seeking further information were directed to call 213-634-3059.

Sunday’s numbers brought the county’s totals to 1,180,485 infections and 19,885 deaths since the pandemic began. The number of coronavirus cases in county hospitals dropped to 2,213, according to the state dashboard, with 30% of those patients in intensive care. Hospitalizations have been dropping steadily since peaking at more than 8,000 in early January.

The county’s daily update did not include the latest numbers from Long Beach and Pasadena, cities that operate their own health departments. Pasadena reported 20 new cases on Sunday, raising the city’s total to 10,772; the city’s death toll remained 305.  Long Beach did not update its totals Sunday; as of Thursday, the city had reported 797 deaths and 50,662 cases since the pandemic began.

Newsom visited mobile vaccination sites in Inglewood and Boyle Heights Sunday to highlight the state’s efforts to vaccinate hard-to-reach communities against the coronavirus. Ironically, Los Angeles’ large-scale city-run vaccination sites — including the sprawling clinic at Dodger Stadium and the newest complex at Pierce College — remained closed, with all appointments rescheduled due to the supply delays. Garcetti’s announcement that they would reopen provided some good news, just after the governor concluded his visit.

While the city’s large centers were forced to close, the city-operated mobile vaccination efforts continued to operate as planned. County officials said their sites have not been affected by weather-related issues and remain open as scheduled.

During his visits on Sunday, the governor highlighted the state’s efforts to vaccinate hard-to-reach and disproportionately affected communities, as equity issues in the distribution of the shots continues to vex health officials.

Vaccination rates among eligible Black residents lag far behind other ethnic groups, according to data released Friday by the Los Angeles County Department of Public Health. Black residents represented just 5.2% of all people who had received at least one dose of COVID-19 vaccine as of mid-February, while 33.5% were white, 23.1% Latino/a and 19.1% Asian.

Only 24% of Black residents aged 65 and older have received at least one dose of the vaccine, compared to 42.8% of white residents 65 and up.

During a virtual briefing Friday, Dr. Paul Simon, the county health department’s chief science officer, said the county is planning a number of steps to address the inequities, such as prioritizing the establishment of more vaccination sites in areas with the lowest rates, expanding mobile vaccination services to serve older residents and people with limited ability to travel to vaccine sites.

The county is also reserving doses so they can be administered in under-served communities, with 6,000 to 7,000 doses expected to be reserved next week for South Los Angeles and 1,000 to 2,000 in the Antelope Valley, he said.

Simon said there are still issues with vaccine supply. The county sites are administering only second doses of the two-dose regimen for people who have already received a first shot.

Health officials have been warning of a difficult month ahead in terms of access to vaccines, with the already jammed appointment system expected to get even more crowded March 1 when essential workers such as teachers, food service workers and law enforcement become eligible for shots. In mid-March, everyone aged 16 and over with a serious underlying health condition will become eligible.

On Saturday, county health officials reported that two additional cases of the COVID-19 variant B.1.1.7 first discovered in the U.K. have also been detected here, bringing the total to 14 so far in Los Angeles County.

The U.K. variant is known to spread more easily and quickly than other variants. In January 2021, British scientists reported evidence that suggests it might be associated with an increased risk of death compared with other variants, but said more studies were needed to confirm this finding.

“With the U.K. variant circulating in the county, we will likely see more variant cases identified in the county,” Public Health Director Barbara Ferrer said. “We must remain diligent with our safety measures even though we see overall decreases in cases, hospitalizations and deaths. Let’s keep our guard up because we know letting our guard down will lead to more cases and, tragically, more deaths again.”