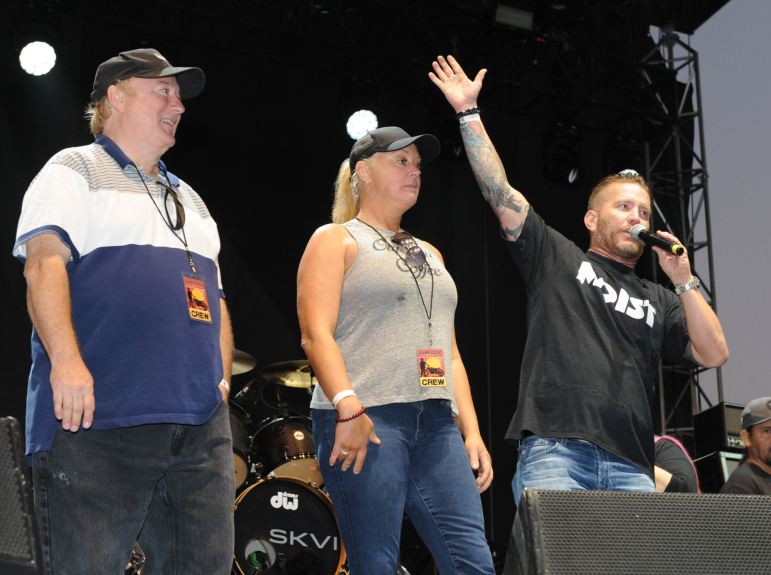 Remember when KLSX (now KAMP, 97.1 FM) was running a talk format? AKA The FM Talk Station? Well, it’s back …kind of.

Coming to you via the magic of digital HD Radio on KLOS (95.5 FM) HD2, various phone apps, smart speakers and online at KLOS2.com is KLOS-2, Southern California’s Talk Station.

KLOS programmer Keith Cunningham broke the news last week, though he is not the programmer of this new venture. Instead, Frank Kramer of Heidi and Frank fame will run the talk station. Kramer will continue to wake KLOS listeners along with Heidi Hamilton on the main channel while curating and cultivating talent for the talk channel.

At its launch March 4th, the new talk station is nothing more than a 24-hour Best Of Heidi and Frank station. But Cunningham explained that this is only the beginning.

“Frank has big plans for the station, and in the next few months new programming will be added,” he told me.

In a press release, Kramer confirmed by explaining, “The 24-hour loop (of Heidi and Frank) is just phase one. In the coming months, my team and I will be adding original programming, special features and even more surprises. KLOS-2 will ultimately become a full-fledged talk radio station, courting new advertisers and personalities.”

His team? Yes, didn’t you know? Kramer is the man behind Toad Hop Entertainment, which is the parent company of the Toad Hop Podcast network. Kramer had launched it after KLSX dropped the talk format in 2009, allowing the Heidi and Frank show to continue as a podcast itself until being picked up by KLOS shortly later. I would assume that podcasts could easily become program material as the station evolves.

In a sense, having Heidi and Frank 24-hours per day is a smart launch. It brings in dedicated listeners who may be willing to listen to other hosts as they are added. And it keeps costs down until the programs find their grooves.

Will it be successful? Don’t be silly: KLSX itself wasn’t even successful as a talk station. You think a station that can only be heard on a special radio, an app or online will do better?

But that misses the point. In the end, it doesn’t have to be successful in the traditional sense. KLOS is already sending the signal out anyway … running the extra HD channel costs essentially nothing, and the online streams are not that expensive either; in total it is far less money-wise than a full-power standalone station. If it can just cover the costs, and potentially bring in new listeners (and maybe sell a few HD Radios along the way), it’s done its job.

I commend KLOS owner Meruelo Media for giving this a shot, and I wish Kramer the best in getting compelling content on the air. Outside of Saul Levine — owner of Go Country 105 and his various HD signals —  this is one of the very few cases locally of trying to really market and sell HD Radio.

I wonder who will be the first new host to join?

It happened in the Savannah-Hilton area of Georgia, where two AM stations, four FMs and two translators  — all in the same head studio complex — were cut off for over two hours due to the failure of a universal supply. Engineers from a neighboring area were sent to repair the UPC from 700 miles away.

iHeart — owner of eight stations locally including KFI (640 AM), KIIS-FM (102.7), KOST (103.5 FM) and My FM (104.3) cut the engineer positions after running out of other things to cut. They already cut talent, advertising executives, promotions, and more. The fact that they don’t appear to be able to afford engineers seems to indicate they are unfit to own even one station, let alone the 860 that it does. It is time to put iHeart, and the other large group owners, out of their misery.

As documented here and elsewhere, the large group model has been a failure in all measures. It is long past the time for Congress and the FCC to break up these groups and limit ownership to a more reasonable 50 stations nationwide. Competition will bring creativity and listeners back. And I can’t wait to read how the corporate-radio apologists will spin this one.

What happens in Vegas…

The economic downturn has hurt radio badly. In Las Vegas, one station is actually going off the air “for a few months,” according to AllAccess.Com.  KJUL-FM turned off the transmitter and ceased streaming online at 12 midnight this past Sunday/Monday.  General Manager Scott Gentry says they will be back once the economy rebounds.