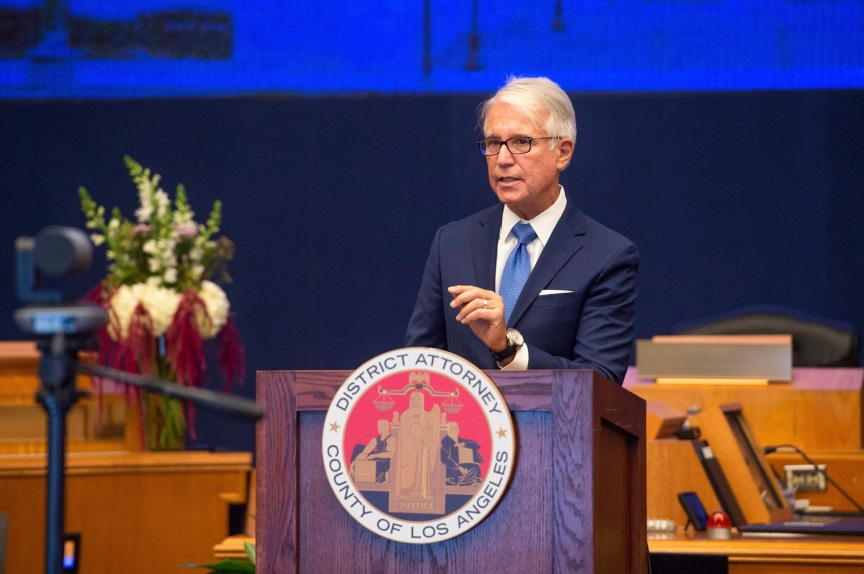 A Los Angeles County Superior Court judge has ordered a convicted murderer to be released from custody after serving just six years of a 50-year prison sentence when a prosecutor refused to call witnesses during a disposition hearing, effectively keeping the case in the juvenile court system on orders from District Attorney George Gascón.

Andrew Cachu originally was tried in adult court even though he was two months shy of his 18th birthday when he shot and killed 41-year-old Louis Amela outside a Palmdale restaurant in March 2015. Under changes in state law since then, however, he was entitled to a retroactive transfer hearing to determine if his conviction should be in juvenile or adult court.

Because a juvenile cannot be held in detention past the age of 25 in California, the two-day hearing in the Michael Antonovich Antelope Valley Courthouse was necessary to determine if Cachu could continue to be incarcerated for the full length of his sentence.

“The victim’s family is devastated and feels abandoned by the justice system,” she said in an email to the Southern California News Group. “They feel that what has happened is not justice.”

Judge had no choice

Yep had no option to keep Cachu in custody because Blair didn’t present evidence showing what services were available to him through the state Division of Juvenile Justice, whose mission is to rehabilitate rather than punish young offenders, Cady said.

“Being released with absolutely no services is not helping Cachu or the community,” she said.

The District Attorney’s Office decided to keep Cachu under juvenile jurisdiction based on an “evaluation of the law relating to the facts of the case and characteristics of the former minor,” Alex Bastian, a special assistant to Gascón, said in an email.

“Both Ms. Blair and the (Los Angeles County) Probation Department recommended that the court refer Mr. Cachu to the Division of Juvenile Justice,” he said. “However, there were no witnesses who could testify to the fact that DJJ has specific programming that would benefit Mr. Cachu presently. Understandably, the probation report was also deficient in its ability to articulate specific programming as required by state law. The judge was left with no legal option other than to terminate juvenile jurisdiction.”

As of Friday, Cachu remained housed at the Twin Towers Correctional Facility in Los Angeles. Cady expects him to be released within the next several days.

Cachu was tried in adult court because of the gravity of his crimes. In 2017, he was convicted of murder and robbery, and also received sentencing enhancements for gang and gun allegations.

Under Proposition 57, which was approved by voters in 2016 to enhance public safety and discourage recidivism by emphasizing rehabilitation, Cachu’s case was remanded by the California Court of Appeal to Juvenile Court to determine if he should have been tried as an adult.

Gascón, who took office in December 2020, has issued nine directives comprising 61 pages that his critics believe are friendly to criminal defendants, such as elimination of cash bail and sentencing enhancements. Only one — dealing with California’s “three strikes” sentencing law — has been deemed illegal by a judge.

Among the district attorney’s new policies is an end to the practice of prosecuting juveniles in the adult court system, regardless of the seriousness of the crime.

“All pending motions to transfer youth to adult court jurisdiction shall be withdrawn at the soonest available court date,” the policy says. “Cases will proceed to adjudication or disposition within the existing boundaries of juvenile jurisdiction.”

The chief enforcer of that policy is Blair, an outspoken former Los Angeles County deputy public defender who is responsible for transfer hearings involving juveniles initially charged in adult court. She has drawn criticism from some prosecutors for her anti-police social media posts.

Last year, while protesters set fires in Los Angeles in response to the George Floyd killing by Minneapolis police, Blair tweeted “#GeorgeFloydProtest Burn that Sh– down.”

Cady, a former Los Angeles County prosecutor, has vehemently objected to what she perceives as Blair’s cozy relationship with Cachu and his mother.

In June, Cady took the unusual step of filing a motion demanding that Yep disqualify Blair from the Cachu case for repeatedly demonstrating that her allegiance firmly lies with defendants and not crime victims and their families. In July, Yep denied the request to disqualify Blair.

“Gascon’s blanket policies are unjust and have again resulted in retraumatizing a murder victim’s family and endangering the public,” Cady said. “The primary duty of the prosecutor is to seek justice within the bounds of the law. A prosecutor must avoid even an appearance of impropriety in everything they do.

“Gascon’s hand picked representative, Alisa Blair, never should have handled this case. She has a clear conflict of interest. Blair’s conduct on this case, including assisting the defendant in speaking to the defendant’s mother, ignoring the victim and the victim’s family, and in not presenting evidence at the disposition/sentencing has shown that her commitment was to the defendant. She abandoned her responsibility to seeking justice, protecting the people of Los Angeles County and safeguarding the victims’ rights.”

Blair’s bias was evident, she said, during a 20-minute phone call Cachu placed to his mother, Bertha Cachu, following a hearing May 10 at the Antelope Valley courthouse.

Bertha Cachu, who had attended the hearing, gleefully told her son that Blair had agreed to intervene on his behalf.

“That’s Gascón’s special adviser,” she explained to Andrew Cachu in a recording of the call obtained by the Southern California News Group. “Oh my God! She’s going to be coming in your case. Did you hear that, man? She’s good. She’s the one I’ve been emailing back and forth.”

Later in the conversation, Bertha Cachu said that during the hearing Blair seemed to signal she would help Cachu. “She’s been studying your case, dude,” she told her son. “Oh my God.”

During the recorded phone conversation, Bertha Cachu read her son a lengthy, detailed email from Blair outlining the legal process Gascón planned to use to keep his case in Juvenile Court.

“I am sure this is all frustrating and confusing, but the bottom line is that the DA wants to keep Andrew in Juvenile Court and we are working towards that goal,” Bertha Cachu said, quoting Blair’s email.

She also spoke with amazement about how fortunate her son was to have Gascón in his corner.  “We never (thought) the district attorney (would) be on our side,” she said. “That is crazy, right? That is unbelievable, man.”