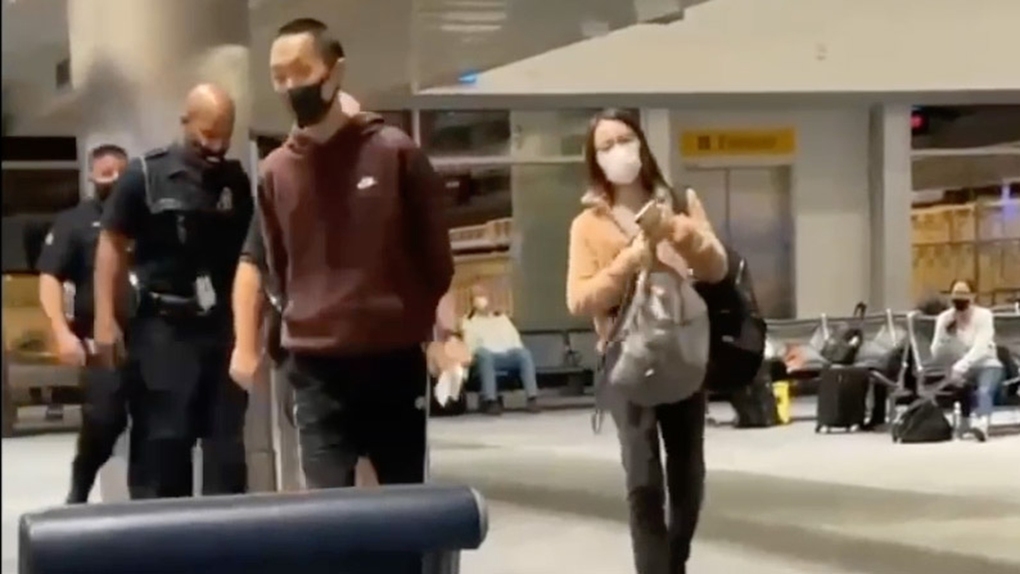 Federal authorities on Monday charged an Irvine man in an attack last week in which he is accused of punching a flight attendant in the nose aboard a flight from New York to Orange County, an alleged assault that forced the pilot to divert the plane to Denver.

Brian Hsu, 20, was arrested at an Irvine home Monday morning, and later appeared in federal court in Santa Ana, where a judge ordered him to report to Colorado later this month to face two charges related to the incident, including one that accuses him of interfering with the crew of American Airlines Flight 976 on Wednesday, Oct. 27.

He faces up to 21 years in prison if convicted on both counts, according to federal officials.

Passengers on the flight en route to John Wayne Airport said Hsu punched an attendant twice in the face, leaving her face mask bloodied. Videos showed Hsu being taken away in handcuffs after the flight was forced to land, but he was later released.

In an interview with the FBI at the Denver airport shortly after the incident, Hsu claimed that he was acting in self-defense after accidentally bumping into the flight attendant while near one of the plane’s lavatories. He claimed the attendant subsequently became “agitated” and began swinging at his head with her hands.

In that interview, Hsu also said he recently had undergone brain surgery in Rhode Island to “reconstruct portions of his skull” following a head injury last year, and that he suffered “psychological damage,” among other symptoms. He claimed that, as a result of the injury, he sometimes experiences a “mental fog” during which he has difficulty thinking clearly, and that he is very sensitive to sound, according to details of the interview included in affidavit filed in support of a criminal complaint.

“Hsu said his parents think he acts differently than he used to,” the FBI agent wrote in the document, which was unsealed Monday.

Hsu told authorities that he was returning home Wednesday on the flight from New York after the medical procedure in Rhode Island, according to the complaint.

In the interview, Hsu also said that another recent football injury, two or three weeks ago, makes it impossible for him to clench his right hand, and that he could not physically have struck the flight attendant with his fist, as authorities allege.

During court proceedings Monday, Hsu sported short hair and wore a black long-sleeved shirt and athletic pants. He was handcuffed and chained at his ankles.

Before the hearing, he spoke quietly with a federal public defender, stealing glances at the courtroom gallery.