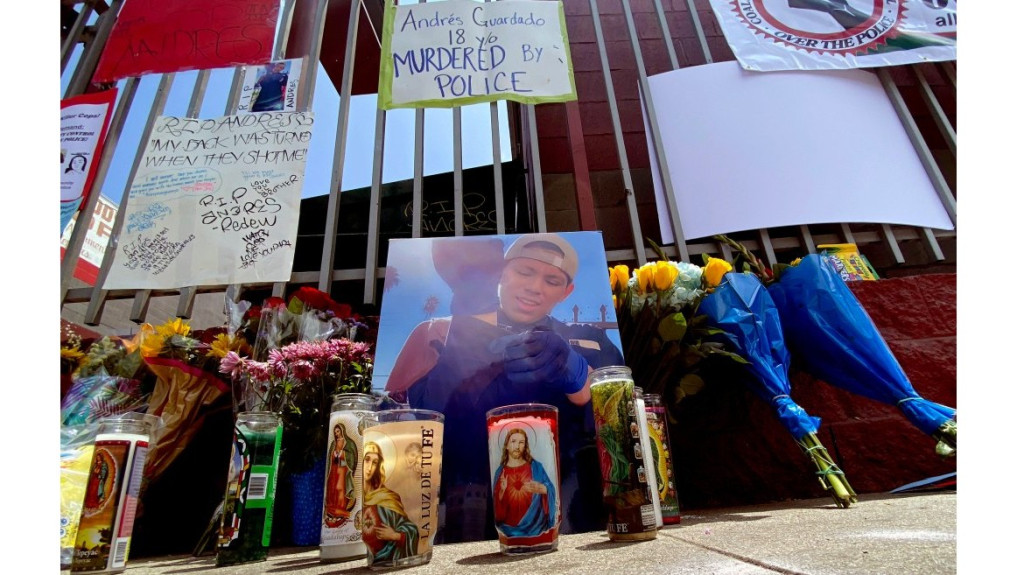 An inquest concerning the death of Andres Guardado, who was killed in a June encounter with sheriff’s deputies near Gardena, was continued after the presiding hearing officer said Monday, Nov. 30, she needed to review sealed documents to see if other witness testimony was warranted.

The review, the first of its kind in the county in more than 30 years, was held in the Kenneth Hahn Hall of Justice in downtown Los Angeles and included testimony from coroner’s officials, two firefighters, a forensic pathologist and a multimedia journalist.

Officials with the Los Angeles County Sheriff’s Department, including the two deputies involved in the shooting of Guardado, did not testify during Monday’s hearing, with most instead invoking the Fifth Amendment that protects against self-incrimination.

It wasn’t clear if the investigation into the shooting by the District Attorney’s Office, a standard procedure for police shootings that determines if any officer broke a law, has been completed.

Before 6 p.m. on June 18, the two deputies were on patrol when they spotted Guardado, 18, speaking with someone who was inside a car that was blocking the entrance to businesses at 420 W. Redondo Beach Blvd., east of Gardena in an unincorporated part of the county.

The deputies said, through their lawyers, that they saw a firearm protruding from his waistband. Guardado then ran between two businesses after seeing the deputies and was shot by one at the end of a driveway.

Deputy Miguel Vega, who fired the shots that killed Guardado, ordered the teen to drop the weapon and lie down on his stomach, his lawyer has said. As Vega went to place on handcuffs, Guardado suddenly reached for the weapon, which was near his right hand, prompting Vega to fire, the attorney added.

There have been robust demonstrations about the shooting, with protesters saying that is not what happened, that Guardado should not have been shot.

The county coroner’s office reported he was shot in the back five times and ruled his death a homicide and ordered the inquest to ensure transparency at the request of county supervisors.

Vega was out of the country and not available until mid-December but expected to invoke the Fifth Amendment if called to testify. Deputy Chris Hernandez, the deputy who did not fire, sent two declarations, one summarizing the incident and the second stating his intent to invoke the Fifth.

A sheriff’s detective and a sheriff’s homicide investigator also invoked the Fifth Amendment Monday and declined to answer questions.

Judge Candace Cooper, once on the California Court of Appeal, Second District, the inquest’s hearing officer, was provided with sealed documents related to the Sheriff’s Department’s investigation, which were subpoenaed by the coroner’s office. Cooper said she’d need to review them to determine if further witness testimony was necessary.

She also wanted to look into whether the sheriff’s deputies’ refusal to answer questions is allowed under the law during an inquest. If not, they could be called to testify.

Most of Monday’s public testimony did not reveal new scenarios or facts.

But Dr. Kevin Young, a deputy medical examiner with the county coroner’s office who performed the autopsy on Guardado, testified that it was possible Guardado was on his knees when he was struck by the first of five gunshots to his back, noting the downward trajectory.

That statement contradicted the statement released by Vega’s attorney that said Vega was walking forward to place handcuffs on Guardado as the suspect was on his stomach when Guardado reached for the handgun, prompting Vega to open fire.

The other four gunshot wounds had an “upward” trajectory, indicating Guardado was either leaning forward or lying on the ground when those shots were fired, Dr. Young said.

Guardado was pronounced dead at 6:01 p.m., about nine minutes after the deputies attempted to make contact with him, according to coroner’s reports.

Dr. Bennet Omalu, who conducted a second, independent autopsy at the request of attorneys representing Guardado’s family, said there were some inaccuracies in the county coroner’s autopsy but agreed with the overall finding that the five shots in the back were all independently fatal.

A toxicology report shows Guardado had no drugs or alcohol in his system.

The inquest may continue at some future date, or Cooper could determine she has all of the available information she needs to provide her findings of the cause and manner of what occurred, which will be forwarded to the Medical Examiner-Coroner.