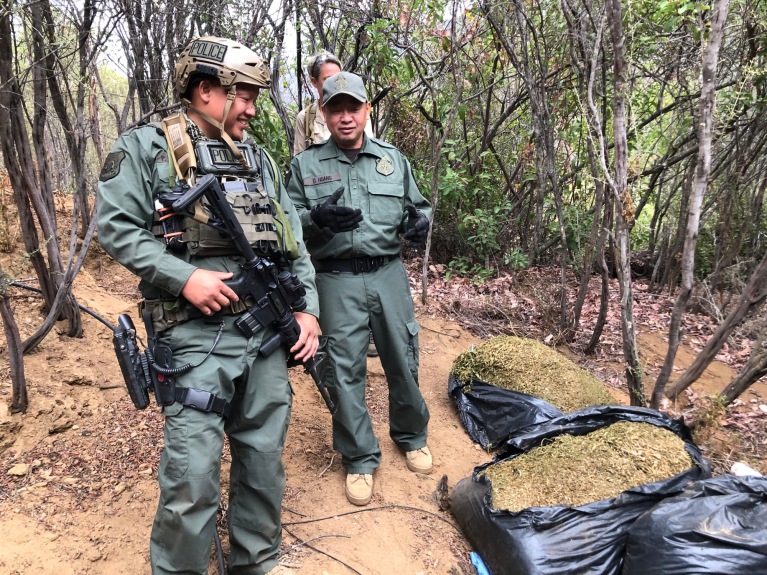 Don Hoang stood on a hillside thick with brush in the Cleveland National Forest where in September, officers had uprooted some 1,300 illegal marijuana plants that could have netted the growers a $4 million profit.

Hoang was more concerned with what he saw scattered around him in a canyon near Ortega Highway in Orange County: pesticides so toxic that they are banned in the United States, plus fertilizer, beer cans, irrigation tubing, clothing and trash.

“For us, it’s not about the marijuana. It’s about protecting the environment, protecting the wildlife and protecting the water supply to the communities,” said Hoang, special agent in charge for U.S. Forest Service law enforcement investigations. “This is what they are doing to public lands. They are coming  in and destroying it for an illicit purpose.”

Ecologists accompanied law enforcement officers on Thursday, Oct. 7 on the fifth and final day of an operation in which several grow sites in the area were tested for pesticide contamination and trash was hauled out. The activity ended with a helicopter using a hook to fly a spaghetti-like collection of confiscated tubing to the San Juan Loop trailhead.

Rich McIntyre, director of the CROP Project — Cannabis Removal on Public Lands — said these growsare only some of the hundreds discovered every year in California’s 20 national forests. They include the Cleveland, Angeles and San Bernardino forests that provide recreational opportunities in Orange, Riverside, Los Angeles and San Bernardino counties.

Some grows are found when farmers report a reduction in water from streams after pot growers illegally divert it. Others, like the one authorities brought a reporter to see in Orange County, are discovered by aerial surveillance.

CROP’s goals are to increase government funding for site reclamation, add to the law enforcement presence in the national forests and increase criminal penalties for bringing illegal pesticides into the forests. LA County residents received a measure of good news recently when county officials agreed to spend $5 million to crack down on illegal cannabis grows in the Antelope Valley and dispensaries in unincorporated areas.

The dangers extend to tribal members who hunt, hikers who encounter gun-toting lookouts and any person and any thing in the path of a wildfire touched off by growers who power up generators and stoves at their campsites.

“We’re one spark from a million-acre fire caused by trespass grows,” McIntyre said.

The grow site inspected Thursday was about a two-mile hike in off Ortega Highway, also known as Highway 74, the commuter link between San Juan Capistrano and Lake Elsinore. The trek began with about a 40-foot shimmy down a hillside from an unmarked spot in the road. It continued on a path about two feet wide that was dug and hacked through brush by the marijuana growers — or more accurately, their hired hands — and for a time along a rocky creekbed.

Officials sometimes had to climb over or duck under fallen trees.

There were clear signs that this was a trail made by people and not wildlife, said Mourad Gabriel, regional wildlife ecologist for law enforcement and investigations in the U.S. Forest Service.

For one, he could see small rocks embedded in the soil — proof that something weighing hundreds of pounds had been dragged over the area. (Later on the trail, Gabriel would come across 50-pound bags of unused fertilizer and estimated that 800 pounds was used at this grow.) Then there was the trash.

“Beer cans are like smoke signals that show people had been here,” he said.

The trail continued into the grow area, where the first signs of past activity there were the hundreds of round, shallow holes about 2 feet wide where marijuana plants had been rooted.

Hoang, the special agent in charge, said many of these grows are controlled by Mexican cartels that bring in Mexican nationals to work. When the site was raided on Sept. 2, five were arrested, he said. Sometimes the workers are able to provide information on those running the operation, but often the organization is so compartmentalized that the workers are of no help, Hoang said.

McIntyre said more marijuana is grown in California than there is demand, so he estimated that 80% of the illegal pot is shipped to the Midwest and East.

The site had remnants of the operation: irrigation tubing, strings on which marijuana was hung to dry, a few bags of trimmings that can be turned into honey oil for smoking, a couple of bags of processed marijuana, a stovetop and even a solar panel used to charge cell phones.

“They’re incredible farmers. They can grow marijuana in soil that is essentially devoid of nutrients,” Hoang said with grudging admiration.

But what these proficient farmers do to ensure their crops’ success troubles scientists such as Greta Wengert, the executive director of the Integral Ecology Research Center, which is devoted to the conservation of wildlife and its ecosystems. Wengert pointed to white dust in the planting holes that she suspected is toxic residue from pesticides that could be washed downstream by rain.

Wengert on Thursday examined three bottles of pesticides that were safely sealed inside containers labeled with tape that reads “DANGER.”.

One contained zinc phosphide, which is used to poison rodents. Two others, carbofuran and methamidophos, are insecticides. All three were made in Mexico in a formulation that is higher than allowed in the U.S., she said. What’s more, Wengert added, the labels are printed in Spanish and lack a code that would allow poison officials to identify it in a database in case someone is exposed and needed treatment

Wengert, wearing gloves and a breathing mask for safety, held each bottle while Gabriel, also gloved, ran a swab over the exterior. He transferred the residue to an oval card that he then inserted into a mass spectrometer. The device, weighing a few pounds and having the dimensions of an oversized lunch pail, was originally developed by the military to detect chemical weapons.

It superheated the pesticide, vaporized it and then flashed the name of the chemical after finding it in the database of ion signatures. The tests confirmed the contents matched the label of each bottle of pesticides.

“It’s a very quick and effective way to get rid of insects and wildlife, but it is equally detrimental to humans, water, soil and indigenous tribes,” Gabriel said.

While nature has its circle of life, the pesticides introduce what Gabriel described as the “circle of death.” At another grow site, he recalled seeing a bear that later was determined to have died from eating contaminated vegetation. Nearby sat a dead turkey vulture that had fed on the tainted carcass. And dropping before his eyes, Gabriel said, were flies that had descended on the dead wildlife.

“Nothing is going to land, touch this and survive,” Gabriel said.

Uphill from the camp was a pit, about 20 feet square and 10 feet deep, where water diverted from the tributaries that feed San Juan Creek and supply San Juan Capistrano had been stored. Irrigation pipes trailed down to the grow site. Each of the 1,300 plants was believed to need nine gallons of water daily for its 120-day growth cycle, or about 1.4 million gallons in total.

“These grows divert billions of gallons of water from our communities,” Gabriel said.

Not all the trash could be removed Thursday. A hazardous materials team will be brought for the pesticides. Other contaminated material must sit for a year while the toxicity degrades.

In the meantime, the teams that visited the OC sites Thursday will move on to other grows.

Capt. Anthony Rose of the Cleveland National Forest addressed them afterward during a debriefing.

“This is one of the busiest districts for cultivation,” Rose told them. “If it was your first time, it probably won’t be your last.”