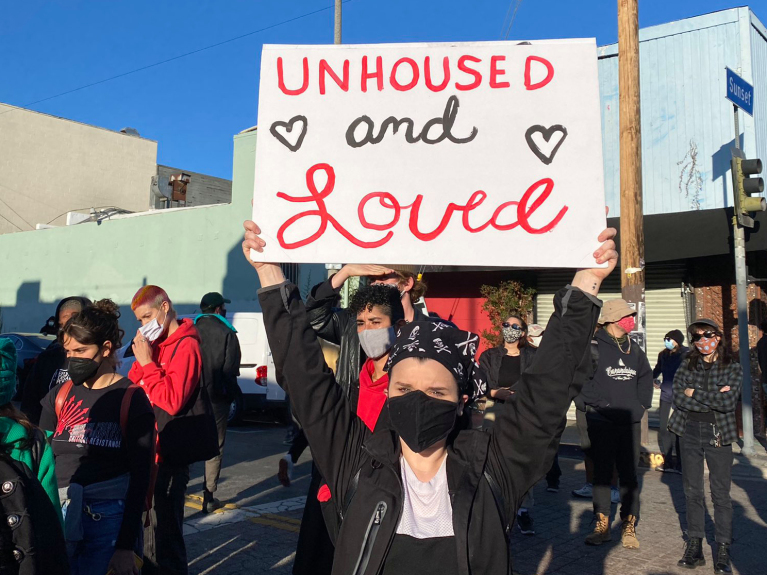 The Echo Park Lake area was jammed with hundreds of protesters on Wednesday, March 24, voicing opposition to the city’s plans to close the park for refurbishment and force residents of a homeless encampment to move.

City officials said the people living at the park would be offered places to stay, but it was unclear where those options would be.

More than 150 people marched from Echo Park Lake to City Council Member Mitch O’ Farrell’s office to protest the closure. The marchers, chanting “housing is a human right,” filled Sunset Boulevard in the area.  Cars were being directed around the edges of the crowd as it made its way down the boulevard. There were no reports of any disturbances or arrests.

Protesters say they will hold a vigil  “to seek citywide cooperation and support in coming days to stop the shutdown of L.A.’s largest self-run homeless haven.”

Marcher Andrea Urmanita, 37, says it’s “critical ” that people in the community show up in support of people living in the park.

“I can empathize with people who are unhoused,” Urmanita said. “I’m a renter, too, and I understand how fragile the line is between being unhoused and being evicted. I am here to support my neighbors’ right to exist as part of the community. I know it could be me, too.”

Los Angeles City Councilman Mitch O’Farrell’s communications director, Tony Arranaga, said the city is closing the park to repair more than $600,000 in damage. A document from the Parks and Recreation Department called the work “park improvements.”

O’Farrell was asked several times this week about the timetable for the closure, but has not responded with specifics.

The Los Angeles Times, however, reported the encampment of homeless at the park will be cleared by Thursday and fences would be installed to keep the park closed for renovations.

About four dozen homeless people are still living in the park, although as many as 100 were believed to be residing there earlier this year, with some already relocated by the city through various housing programs.

O’Farrell did not provide details about what type of housing would be provided or when it would happen, but said the city previously housed more than 100 of the park’s residents. According to O’Farrell’s office, the city is working to identify rooms and beds through Project Roomkey, Project Homekey and various local shelters.

Advocates for the homeless carried signs bearing slogans such as “Unhouse and Loved,” “Services Not Sweeps” and “Housing not Sweeps.” One tent was painted with the phrase “We Refuse to be Swept into Dark Corners.”

O’Farrell told reporters during an unrelated news conference Tuesday that the city will follow all U.S. Centers for Disease Control and Prevention guidelines when preparing the park for the renovation work, and efforts are being made to find housing for everyone who has been living there since January.

“I applaud the efforts of (the Los Angeles Homeless Services Authority) to place folks into (Project Roomkey) sites, but as we all know, eligibility for the program is limited,” said Sachin Medhekar, organizing committee member for the SELAH Neighborhood Homeless Coalition. “I’m urging you to not displace the over 100 folks that reside at the lake, especially during this ongoing pandemic and to instead focus on connecting folks with a variety of services and housing options they deserve.”