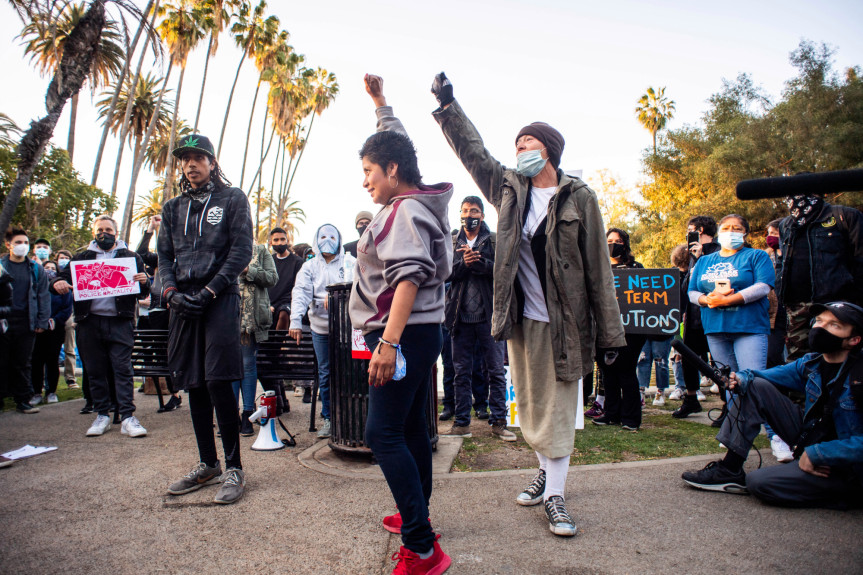 Los Angeles’ Echo Park Lake area was jammed with hundreds of protesters on Wednesday, March 24, voicing opposition to the city’s plans to close the park for refurbishment and force residents of a homeless encampment to move.

Several unhoused people who remained said they did not want to give up the self-run community they have built, and phoned into a City Council meeting demanding that they be given better options, or be allowed to stay.

One woman who identified herself as Queen told elected officials that “we will not leave. We will stand today, tomorrow and every other day that needs it.”

The park dwellers never sought to be unhoused and living at the park, she said, “but if you want us out, you need to come with reliable, sustainable, long-lasting, permanent solutions, not dog scraps.”

Several said they aimed to secure a meeting with Councilman Mitch O’Farrell, who represents the area and is coordinating the clearing out and closure of the park.

The swell of support for the Echo Park dwellers Wednesday arrived as the city and county continued to grapple with the enduring homelessness crisis, rendered even more complex by the year-old coronavirus outbreak.

Prior to the pandemic, more than 40,000 people were estimated to be homeless on a given night, despite ever-growing efforts to shelter and house people. As tents and encampments have increased, complaints from some residents have stoked demands for enforcement actions aimed at clearing them away or limiting them to certain areas.

Just before 8 a.m. Wednesday, more than 150 people marched from Echo Park Lake to O’Farrell’s office to protest the planned closure. The marchers, chanting “housing is a human right,” filled a stretch of Sunset Boulevard. There were no reports of any disturbances or arrests.

The marchers carried signs bearing slogans such as “Unhoused and Loved,” “Services Not Sweeps” and “Housing not Sweeps.” One tent was painted with the phrase “We Refuse to be Swept into Dark Corners.”

“I can empathize with people who are unhoused,” marcher Andrea Urmanita said. As a renter, she said she can “understand how fragile the line is between being unhoused and being evicted.”

The rally came a day after activist groups sparked a letter-writing campaign that generated more than 400 emails to O’Farrell’s office.O’Farrell’s communications director Tony Arranaga said the city is closing the park to repair more than $600,000 in damage. A document from the Parks and Recreation Department called the work “park improvements.”

The closure date of the park remained unclear as well as how long it would remain fenced off. O’Farrell was asked several times this week about the timetable, but did not provide specifics.

When pressed during a news conference on an unrelated matter, O’Farrell said the park “will close soon, notices will go up and then we’ll all know.”

Rumors floated that the closure and sweep would take place Wednesday, spurring encampment residents to invite supporters to join them overnight Wednesday into today in case city crews came at night.

O’Farrell said 120 people have moved from the Echo Park Lake encampment to temporary housing, such as at Project Roomkey and Project Homekey sites.

In his statement Wednesday morning, O’Farrell said his office has been working with the L.A. Homeless Services Authority to provide “a pathway to live life off the streets,” and that they have been at this for months, “taking much time, sensitivity and care.”

He urged those who “share our goal of providing housing, supportive case services and medical care to Los Angeles’ most vulnerable residents” not to gather at Echo Park Lake and to support “this ongoing work to help people get housed without interruption.”

But the encampment’s residents said they have created a model for a “shelter” that rivals what public officials and service providers have so far offered.

“We’re not shelter-resistant,” David Busch-Lilly said. “We’ve created a shelter here. … We’ve created a model here that meets the needs that have not been met yet.”

A news release from the “Echo Park Tent Community” this week said the park’s unhoused residents have set up kitchens, showers, a community garden, and trash cleanup and created “a sense of security, safety, and stability and healing for drug addiction and mental illness with our own pioneering forms of therapy in the absence of any help from the city government.”

With fewer interactions with the L.A. Police Department and other city departments that were “uprooting our lives,” they said they were able to build a community that “did things together outside the context of charity or pity.”

They also pushed back Wednesday on characterizations that “we are criminals, that we’re drug addicts, that we’re horrible people.”

Ayman Ahmed, one of the encampment residents who spoke, led a chant saying, “We are not criminals!”

Encampment resident Dreamer told the City Council in his public comment that their situation should be treated as a “humanitarian crisis,” and not as if they are “just people breaking the law.”

“I applaud the efforts of (LAHSA) to place folks into (Project Roomkey) sites, but as we all know, eligibility for the program is limited,” said Sachin Medhekar, organizing committee member for the SELAH Neighborhood Homeless Coalition. “I’m urging you to not displace the over 100 folks that reside at the lake, especially during this ongoing pandemic and to instead focus on connecting folks with a variety of services and housing options they deserve.”

Wednesday, the rally was hardly noticeable from some corners of the park. Geese waddled and honked, an elderly Asian man took a leisurely pace for his morning walk and a woman pushed a stroller down the walking path. Few took notice of the blue, gray and red tents that dotted the grassy areas.

Encampment resident Queen argued Wednesday that closing the park would also cut it off from anyone who now comes to the park to release tension, including mothers who have been taking care of their children while they attend school through digital devices.

She recalled staring up at her ceiling before she lost her home and only seeing bills piling up. Life also handed her other troubles, including when she got injured in a serious auto accident. With life even tougher now, she said the park helps her pick herself back up.

“Sometimes the worst battles you fight by yourself, and this is a place that gave me that peace of mind, to come and look at the water,” she said. “Sometimes if I know I won’t have money tomorrow, but (with) that view overlooking L.A.? I can do anything.”