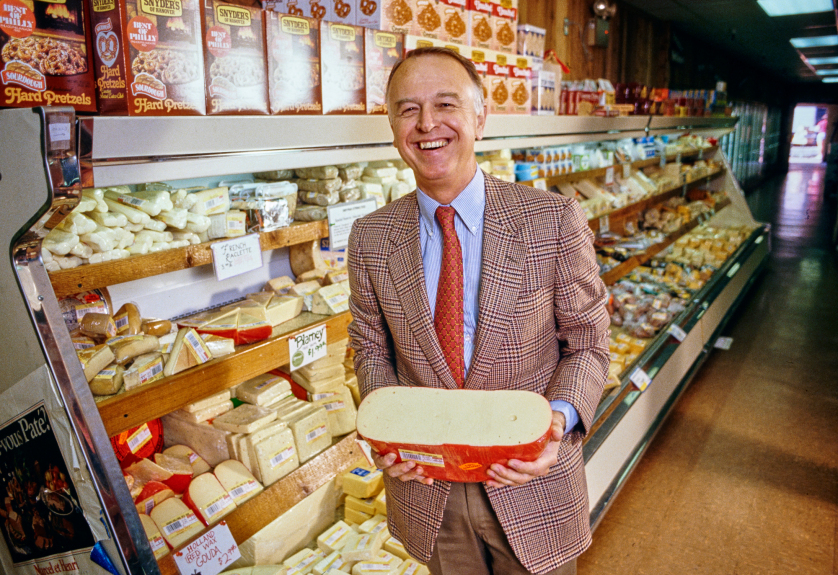 Long before Trader Joe’s sold a buffet of fancy foreign cheeses, it had Brie. And Trader Joe’s had Brie first.

The story of how the Southern California-based grocery chain cornered the market on gooey French cheese is just one of the tales told in Joe Coulombe’s business memoir, “Becoming Trader Joe: How I did Business My Way and Still Beat the Big Guys.”

Coulombe, who grew up on an avocado farm in Del Mar, died in February 2020 at his Pasadena home at the age of 89. However, with author Patty Civalleri’s help, his words live on.

“Becoming Trader Joe” is a business book, one that tells the origin story of the wacky grocery store filled with wonderful and weird foods like pickle popcorn and Sriracha seafood potstickers along with, you know, normal stuff like bread and milk and other staples. It’s also the history of an iconic American brand, which is based now in Monrovia, that grew into 530 locations and sold untold bottles of Two-Buck Chuck wine.

The precursor to Trader Joe’s was Pronto Market convenience stores, a small chain that doesn’t resemble today’s grocery stores. At Pronto, you could have picked up oil for your car or toilet paper and candy bars.

“They called them variety stores because you could get a variety of stuff,” Civalleri said. “Mostly around-the-house kind of stuff.”

The origin of the book is itself a story: Coulombe had produced the manuscript, but plans for it had long been set aside and he gifted it to his best friend and first Trader Joe’s employee, Leroy Watson. After Coulombe’s death, Watson showed the raw manuscript to Civalleri and asked if she might help shepherd the book to publication.

Civalleri says she fell in love with it. She edited and shaped it into chapters, presenting the document to her agent. Here, she talks about the book, the store and its Southern California roots. The conversation has been edited for length and clarity.

Q. How did Joe get into grocery stores, to begin with?

Joe was in his 20s, right out of Stanford Business School, and he took a job at Rexall Pharmacies making $325 a month. A Rexall vice president took him under his wing. Rexall owned six Pronto Market stores in Southern California.

But it was an evolution from Pronto to Trader Joe’s as we know it. The late Pronto-early Trader Joe’s was very much for the guy who had a relaxed life.

Q. How did the original Trader Joe’s in Pasadena get started?

Joe got wind that the variety store he visited in Texas was coming to California. They had a huge marketing budget, and Joe thought they were going to put him out of business.

So Joe goes home, grabs his wife and kids, and they go to a Lake Arrowhead cabin.

That weekend he sees a movie about some old trading ships. It made him think of a cool drink he’d had at Trader Vic’s cocktail bar. They were famous for the mai tai, and he wanted one. These thoughts started swirling around his mind and that’s how he came up with the concept.

That’s when Trader Joe’s was born, in 1967. One by one, they changed the six stores to Trader Joe’s.

And that Texas variety store? Well, it was 7-Eleven.

Q. What was Joe’s inspiration for getting unique products?

Joe identified a market back in the ‘60s and ‘70s. He called them the “overeducated and underpaid.” More people in the country were getting an education. They were later called the middle-class. These people had a deeper sense of what they wanted to eat. They didn’t want frozen dinners or Del Monte canned beans. They healthier things, and Joe listened.

He suddenly had fabulous foods that the big grocery stores didn’t carry. He is responsible for starting the foodie culture we enjoy today. He changed the foundation for this culture.

Q. Talk about Brie, if you would.

At that time, the dairy industry regulated cheese in the U.S. Cheddar and Swiss were the two kinds of cheese in the major grocery stores. Well, Leroy Watson saw one cheese while he was in Europe. We all know it and love it. It’s called Brie. Joe was able to bring Brie to the stores because the American Dairy consortium wasn’t allowed to regulate foreign cheese.

And Joe was able to sell it for less than what grocery stores were charging for Velveeta.

Q. Can you speak to Joe’s connection to Southern California?

He loved Pasadena. Both Joe and his wife were very involved in the community, especially the arts scene. In fact, Joe used to print information for local art events on the back of the Trader Joe’s bags.

Q. It’s well-known Joe placed a priority on his employees’ happiness. Was he always ahead of the curve on this?

His priority, from day one until the day he died, was his employees. He felt the single best decision he ever made was that he overpaid people. What that bought him were employees with high self-confidence and character. He got people who came up with ideas. He got loyalty. He got people who cared about their jobs.