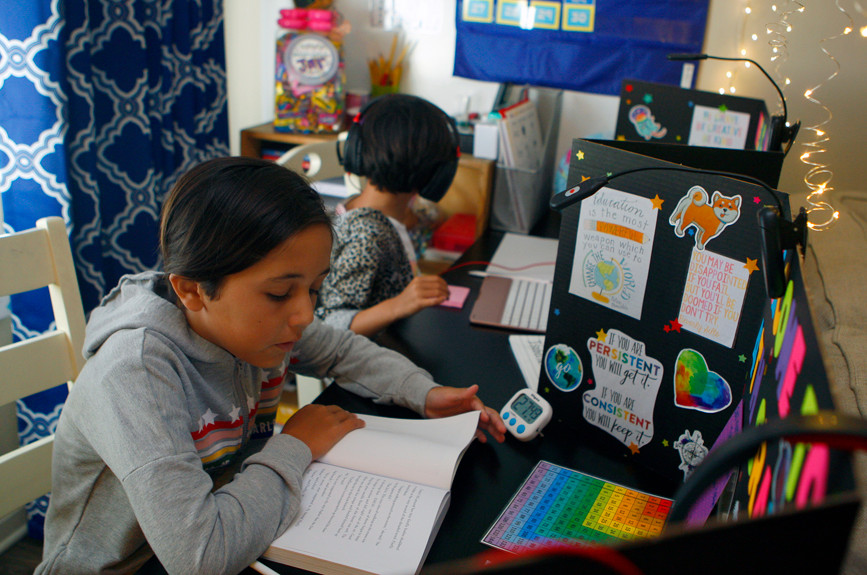 It’s been almost six months since Southern California students left their classrooms due to the coronavirus pandemic. And many haven’t been back yet. Instead, they’re again doing “distance learning,” taking classes and doing homework from home.

It hasn’t always been easy for millions of families in Southern California.

So we asked readers how they were making it work. What clever ideas had they created to make learning from home — often alongside parents working from home — more successful?

Here’s what they told us.

Ontario resident Aimee Dyer, who has two students in the Ontario-Montclair School District, “bought two project boards to create a private space for each child and which anything important can be pasted on for reference such as log-in information and schedule.”

She also purchased a three-tiered rolling cart, similar to those in many classrooms. School supplies, school books and Chromebooks all get stored there.

Anita Revelles of Rancho Cucamonga has two Alta Loma School District students. Even at home, they keep to a bell schedule, using an inexpensive timer controlled by her fifth grader.

“She sets the timer herself,” Revelles wrote. “Then she goes on ‘recess’ by getting a snack, playing in her room or outside. It gives her chance to take a mental break from online school.”

Redlands resident Janice Endsley has a kindergartner in the Redlands Unified School District along with a preschooler. She keeps regular schedules for both, though they’re all at home today.

“We also follow a school schedule, so we start school time at 9 a.m. each day with writing and math work, then we have outside playtime, snack time, and Zoom time,” Endsley wrote. “So far, it’s been going smoothly, and I’m grateful to be home and able to guide my kids with their distance learning.”

“I’ve prepared separated rooms for each kids, one is first floor and the other one is second floor,” she wrote. “Those are different rooms from their sleeping rooms.“

Alisha Rosas, a Fontana resident with two students in the Central School District, created separate spaces for her kids virtually — using headsets with microphones — so neither has to listen to the other’s teachers.

Arcadia resident Angela Child separates her son’s school environment from his home environment by taking him out of the house at school time.

“My son goes to work with me and does school in an empty office,” wrote Child, whose son is in the Pasadena Unified School District. “He feels more energized and motivated with other people working and being productive nearby. He uses a whiteboard and makes a different backdrop behind him each day to add spice and interest for his classes.”

She put a security camera behind him, “so we can watch and not be in the room with him to make sure he’s staying on task,” she wrote.

That allows her to work directly with her pre-kindergarten student without having to worry about the first-grader.

Create a school vibe in the house

“I tried to recreate a kindergarten classroom vibe at home with some educational posters, art supplies, and puzzles,” Endsley wrote. “My living room feels like a preschool and kindergarten classroom, but my kids love it and it has been helping to keep them in a learning mindset for school time.”

Hemet resident Bonnie Riley, who has one student in the Hemet Unified School District, has created something of a classroom environment by linking their television set to her kid’s Chromebook.

Erin Connolly, of Riverside, has turned her house into a neighborhood school.

“I just set up a little school at home and opened my home up to other families with students struggling with online school,” she wrote. “For lunch breaks we play board games or walk to the park. The kids get social interaction plus structure and support, and everyone is happy and excited each day. I guess the ‘hack’ is making the best of the situation!”

And when all else fails, turn to candy.

Tustin resident Laura Freel, who has four Tustin Unified School District students, has transformed much of the family’s apartment to make it into a school environment.

Each student has their own learning area, with posters that give each student affirmations and other decorations that recreate a classroom atmosphere. And, of course, there’s the candy jar.

When her students finish an academic task, whether it’s a significant chunk of the school day, or flash-card practice or other evening school work, they get to pick from the gallon-and-a-half jar of mixed candies. The treats are otherwise off-limits to everyone.

“We use it throughout the day,” Freel said. “It’s been going really well.”