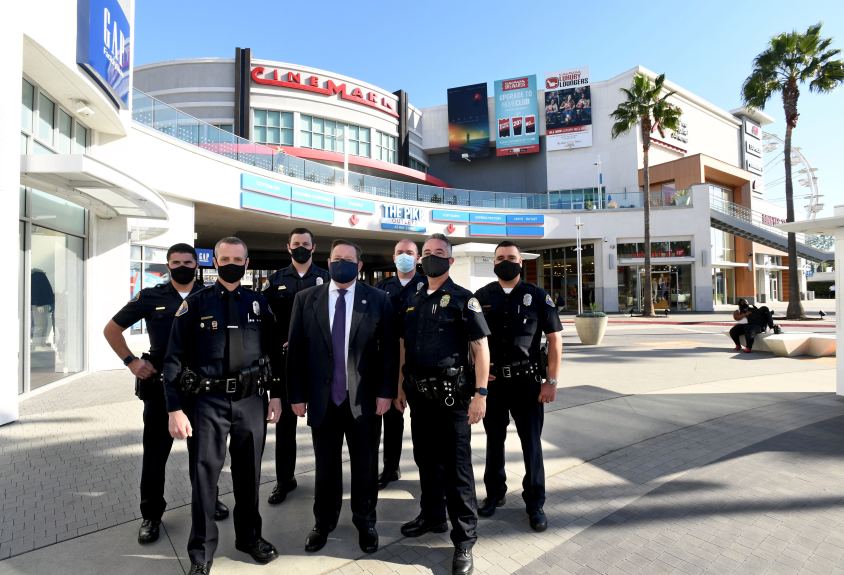 Even before day turned to night on May 31, looters smashed windows, entered storefronts and escaped with arms full of wares from Long Beach businesses while demonstrators protested nearby against police brutality in the wake of George Floyd’s death.

These looters and others damaged storefronts and left strings of debris in the street. And they set fires, one causing major damage to the Men’s Suit Outlet at Seventh Street and Pine Avenue.

The march drew mostly peaceful protesters – and in much smaller numbers, criminals.

For the last seven months, 16 members of the Long Beach Police Department have been working to identify and arrest suspects. The Long Beach Looting Task Force scoured through hundreds of hours of surveillance footage, photographs, tips from the community and kept an open line with business owners to arrest 60 suspected looters, Deputy Chief Erik Herzog said.

The cases of another 18 suspects were handed over to other law-enforcement agencies that were also pursuing criminal charges against them. In the cases of three others, minors, authorities did not file charges because the suspects agreed to attend diverision programs.

The task force has continued to make arrests but will disband at the end of the month so members can return to their original assignments.

“It has really changed us,” Herzog said. “We now have a framework to be up and running in no time in case this happens again.”

The task force – six officers, six detectives, two sergeants, an analyst and a clerk typist – was formed the day after the May 31 protest against police brutality quickly turned violent in spots, with clashes between officers and protesters and many opportunists breaking into stores, looting and, in two cases, setting them on fire.

How was the task force going to identify suspects and hold them responsible?

First, police took photos of those arrested for curfew violations before issuing citations and releasing them, Herzog said. They kept those photos on a wall to compare with surveillance videos and photos from cameras at the businesses and elsewhere that had been strategically placed in key locations around the city.

Then they created an online portal through Axon, the same company that makes the body-worn cameras used by the Police Department. That allowed the community to send anonymous tips in the form of videos, photos and social-media posts.

“Initially, we got some funny videos and people sending us K-pop,” Herzog said. “But the overwhelming support from the portal was huge for us. We got quality information, quality videos and rather than sharing it on social media, they directed it to our portal.”

Pairs of task force members would spend hours per shift sifting through hundreds of video and photo submissions, Herzog said. Task force members rotated assignments to keep them from spending too much time in front of screens.

Relevant tips were sent to the detectives, who then worked to place the suspects at the stores to build cases for arrest warrants.

The task force set out to make immediate, initial arrests.

“We broke it down and said, ‘Let’s get the low-bearing fruit first,’ ” Sgt. Malcolm Evans said. “(We wanted to) get some folks into custody to be accountable for the crimes and get that out to the community.”

That strategy aimed to discourage looting at future demonstrations and to instill confidence in the community so it kept sending in tips.

Police discovered many of the looters were organized, using rental cars to make their way into the city, police said. Task force members worked with the Los Angeles and Santa Monica police departments and learned that some of the Long Beach suspects had also looted during protests in those areas, Herzog said.

“These are people that followed the major protest of the day,” Herzog said. “They would take advantage and start looting other cities.”

The task force learned that employees and owners of the affected businesses knew some of the looting suspects as previous customers, Evans said.

“That made it easier for us,” Evans said. “We didn’t just take their word for it, though. We had to look at various sources to make sure we had the right person. …

“We wanted to make sure we had the right guy, and we weren’t infringing on peoples’ rights.”

Other identifications have come from community members, including some who have reported their neighbors to police after watching them walk into their homes with boxes of loot, Evans said.

In other cases, witnesses identified people for the task force through social media after suspects made posts bragging about what they hauled off, Detective Denise Green said.

“It’s refreshing,” Evans said. “You live in the city and you’re proud of where you live and you’re upset about community members doing this. Some of these poor people have lost their livelihood. Hopefully this brings some closure.”

Roughly half of the 60 arrestees were from Long Beach. Nine were juveniles. There’s still 33 additional suspects police hope to find, Evans said.

Monetary estimates of damage and losses, and how much has been recovered through investigations, were not yet available.

Police wished they could have done more to prevent the looting from occurring on May 31, Deputy Chief Herzog said, but pursuing charges against those responsible was important.

The Police Department now has additional strategies for potential election-related protests and beyond because of what the task force members learned.

“There were lessons they took on how to control traffic and deal with side issues away from the protest,” Herzog said. “It helped us evolve as a department so that we’re better prepared to respond.”