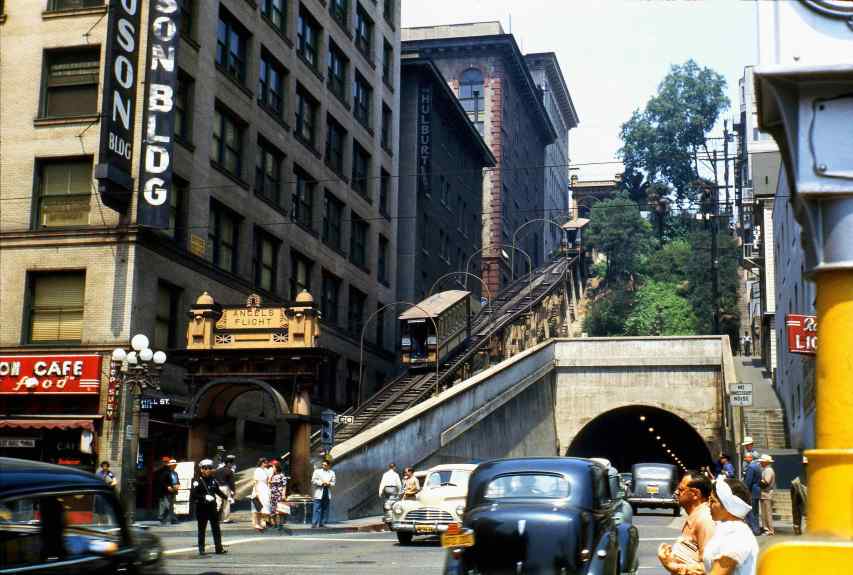 In the early 1990s, when Nathan Marsak moved to Los Angeles after graduate school, he ended up at the bars near Central Library. He recalls locals pointing to the hill that stood outside the dingy windows and telling him how, decades earlier, it had been covered with mansions.

Marsak would ask about those mansions. The locals would ask for another drink. “Then we would get drunk and mount a charge up to the hill looking for remnants of the old Bunker Hill,” the historian recalls by phone from his home in Highland Park.

On September 22, Marsak will publish his book “Bunker Hill Los Angeles: Essence of Sunshine and Noir” through Angel City Press. The book documents the rich history of a neighborhood that rose up in the late 19th century and was redeveloped in the middle of the 20th.

In Marsak’s book, the neighborhood reads like a microcosm for Los Angeles. He chronicles its connection to film, art, literature — and even the search for Lizard People, a local urban legend about a city underneath L.A. populated by people descended by the Mayans — while documenting the struggle that ultimately led to its demise as a residential neighborhood.

Marsak grew up in Santa Barbara, close enough to be familiar with the television commercials for Los Angeles businesses, but still hours away from the center of the city and the ghosts of its 19th and early 20th century life.

After moving to L.A., Bunker Hill became a point of fascination for him. He got a job at the Museum of Contemporary Art, which was not only located on Bunker Hill but also had a fast enough internet connection to access the historic photos of the neighborhood that Los Angeles Public Library had begun uploading. He would venture to the downtown bookstores looking for vintage images of the neighborhood. Over the years, Bunker Hill would come up in his various Los Angeles history projects, like the group blog he participated in called On Bunker Hill.

Early on in his study of the neighborhood, Marsak had a vision of Bunker Hill that was informed by the works of William Reagh and Arnold Hylen, photographers whose black and white images added an air of mystery to the rambling old homes. It was a neighborhood that became a film noir setting through movies like “Kiss Me Deadly” and “Criss Cross” (and was more recently recreated for HBO’s dark “Perry Mason” series).

But Marsak’s view began to change when he came across Kodachrome photos on eBay. In color, he saw the sunlight, manicured lawns and seniors feeding pigeons against the backdrop of Bunker Hill’s unusual mix of architecture styles.

“It started to dawn on me that perhaps there was more to the story,” he says.

Through the blog On Bunker Hill, he met Gordon Pattison, who had lived there and shared firsthand experiences with Marsak. The historian came away from the conversations with a new perspective; Pattison wrote the foreword for “Bunker Hill Los Angeles.”

The irony, Marsak says, is that Bunker Hill was the kind of neighborhood that urban planners and hip locals now champion.

“What really annoyed the city fathers is that it was this wonderfully mixed neighborhood,” says Marsak. “The stuff that we try to engineer into neighborhoods now — the hallmarks of new urbanism now — are density, walkability, that sort of live-above, work-at-home, no car, live above the shops, racially mixed, all this stuff. That was Bunker Hill, in a nutshell.”

In his research, Marsak was struck by the diversity of architecture that once existed there. “The story that you hear of Bunker Hill is that it’s all Victorian,” he says. The reality, though, was that it was also Mission Revival and Beaux Arts and Art Deco and Late Moderne.

By the postwar era, however, the popular perception of the neighborhood was one of blight. Ultimately, in 1959, Los Angeles City Council voted to redevelop Bunker Hill. The two opponents, Marsak notes, were “the most left-wing and the most right-wing” council members, Edward Roybal and John C. Holland.

Ultimately, Marsak sees parallels between the story of Bunker Hill and more recent development projects in neighborhoods like Hollywood, where bungalows and Craftsman homes have given way to high-density housing, despite protests.

Moreover, Bunker Hill once again faces preservation concerns. In February of this year, Union Bank Square, downtown’s first skyscraper, was designated a Historic-Cultural Monument. Meanwhile, the Kenneth Hahn Hall of Administration and Stanley Mosk Courthouse are on Los Angeles Conservancy’s watchlist, as there has long been talk of demolishing the buildings designed by multiple, famed local architects, including Paul R. Williams (the subject of another upcoming book we’ll be covering).

For Marsak, one personal revelation came to light while working on the book. His feelings about modern Bunker Hill have changed.

“As an ardent fetishist of lost and vanished Bunker Hill, I was shocked and bemused to find a growing respect for modern, contemporary, post-new development Bunker Hill,” he says, “especially now that I see the vultures are circling and now that they’re starting to demolish parts of it.”