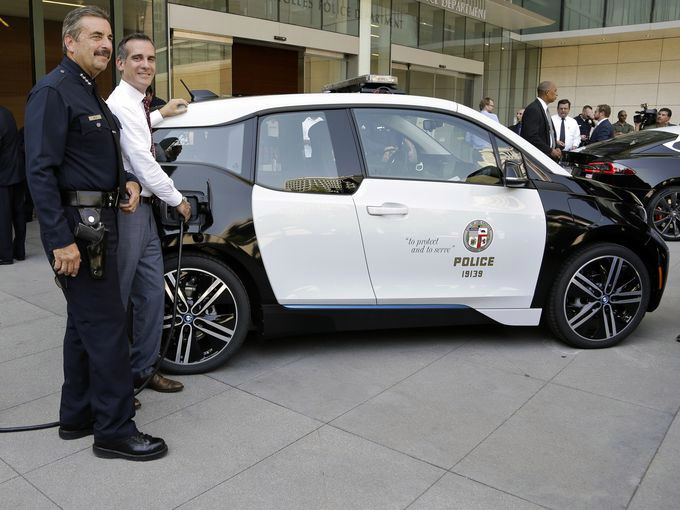 Andrew Lambrecht, who runs The Current Review, a electric car-focused blog he launched in July, said he is particularly passionate about his favorite vehicle, the i3.

While scrolling through used car listings, the 17-year-old came across a slew of black-and-white 2017 i3s with the same specifications for sale in Southern California.

“They all had the same trim,” he said. “They were all government-owned, all of them.”

Lambrecht recalled reading about BMW winning a bid to supply the LAPD with 300 BMW i3s over a three-year period. He dug a little deeper and noticed the dealership selling the certified preowned i3s also provided the leases.

The teen’s story got picked up by BMW and electric vehicle news sites, including Bimmer Life Magazine and Jalopnik. Within days of the post, the BMWs were all sold off, according to Jay Kong, a sales manager at New Century BMW in Alhambra.

“The articles just blew up and a lot of people didn’t really know about these cars until the articles came out,” Kong said. “It’s a good deal for the price. Some were really low miles.”

Mayor Eric Garcetti and then-Chief Charles Beck touted the leases as a commitment to sustainability in 2016. The mayor’s plan called for the LAPD to lease 100 battery electric vehicles each year for five years to replace the department’s older, gas-powered nonemergency fleet. Los Angeles leased the first 100 i3s in June 2016 and another 100 in September 2017.

However, the city’s limited charging infrastructure, combined with the earlier i3’s low range of about 81 miles, made using the vehicles impractical. The LAPD has leased 235 BMW i3s as of 2019 and delayed leasing more because of the low utilization attributed to a lack of charging stations, according to a 2020-21 budget request.

A CBS LA investigation in 2018 found many of the vehicles were barely used. Hidden cameras showed employees using a BMW to pick up lunch and another for a trip to a nail salon. The department estimated they’ll spend about $10.5 million total on the program, according to CBS LA.

The LAPD pays about $440 monthly per lease now, with the total cost just shy of $1.6 million a year, including extra funds for maintaining battery chargers, according to the department’s 2020-21 budget request. The city initially spent an additional $1.5 million to build 104 charging stations needed to make the transition to electric vehicles more viable. The number of charging stations was slated to double in subsequent years.

Utilization of the BMWs has increased over the years, thanks to the “additional deployment of charging infrastructure and the increased education and acceptance of the electric vehicles,” according to the department’s 2020-21 budget request. The department measured an annual utilization of 2,539 miles in December 2016, 3,374 miles in June 2017, and 5,000 miles in July 2018. The return of the 2016 models in 2019 decreased the mileage averages, and the numbers are expected to drop again when the 2017 models are replaced this year, according to the report.

A spokesperson for the LAPD was unable to answer questions about the program and stated the department would need at least two weeks to research the answers.

Were leases ‘for show?’

Jon Coupal, the president of the Howard Jarvis Taxpayers Association, said the city should conduct a comprehensive study to determine if the program is providing the return on investment originally envisioned.

“If they’re spending more than $1 million for vehicles that they don’t even put 10,000 miles on in three years, that suggests that this is not a particularly good use of taxpayer dollars,” Coupal said. A number of hybrid vehicles have significantly longer range, while also operating extremely fuel efficient.

“I think at the end of the day, what taxpayers ought to be asking elected officials and policy makers is whether this purchase was for show,” he said.

According to Kong, the LAPD returned about 30 of the 2017 models to New Century earlier this summer and the vehicles were listed for a few weeks before the interest suddenly surged. Another shipment of the LAPD’s returns is expected later this month, according to Business Insider.

All of the i3s were certified preowned, with an eight-year warranty on their batteries. The dealer was selling the lightly used vehicles, priced originally at $43,000, as low as $15,500 used.

‘Worked out for everybody’

“We didn’t make much on them,” Kong said. “We were just trying to move them out because there were so many of them. It worked out for everybody.”

Lambrecht, the high schooler blogger, describes the i3 as his favorite car.

“There’s nothing like it on the road, it drives phenomenally,” he said. “You’d never expect it would be a fun car to drive.”

Despite his adoration, the teenager said he doesn’t understand the appeal for the LAPD. Other cars, including the Tesla Model 3 and the Chevy Bolt, cost less and have significantly longer ranges. The 2019 Bolt, for example, can reach 238 miles on its battery, while the 2019 i3 maxes out at 153 miles without a range extender.

“It’s a really weird option,” Lambrecht said. “For me, I like it because it’s kind of weird, and it’s a little impractical.”

Others must have agreed. The two dozen former LAPD vehicles that Lambrecht wrote about Aug. 27 were all gone by Sept. 1.