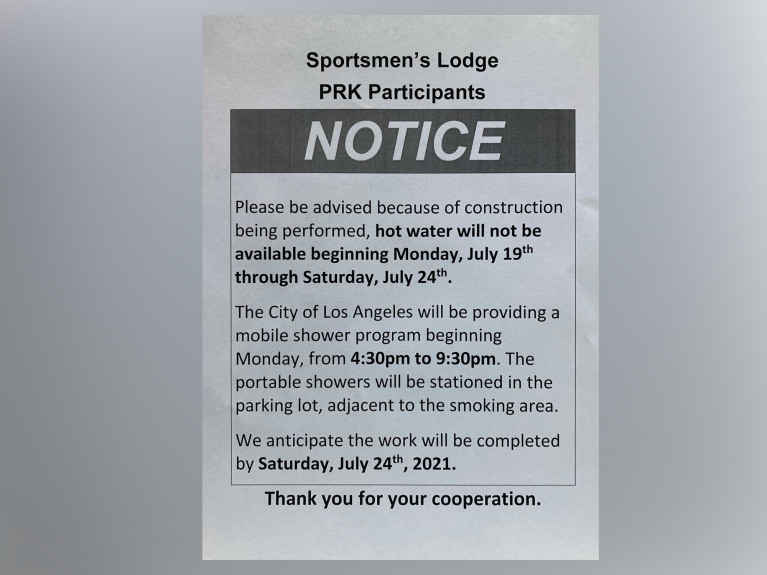 Unhoused residents sheltering at the Sportsmen’s Lodge hotel, where a Project Roomkey program is set to close this month, are demanding that they be allowed to stay at the site until they can be offered motel rooms or permanent housing.

Remaining Project Roomkey participants at the Sportsmen’s Lodge say they are concerned they could be forced to go back to living on the street, if they are only offered beds at congregate shelters. It’s unknown how many people remain at the hotel or how many signed the letter.

“We do not consider congregate shelter to be a safe, acceptable form of housing,” the residents, whose names were not provided in a post on the news site KnockLA, said in a demand letter issued last week by residents at the hotel.

“During the time we have spent in shelters, we experienced harassment, theft, physical violence, sexual abuse, assault, and increased anxiety and depression and have no desire to return to those conditions,” the letter continued.

Since the letter was issued by participants last Thursday, July 15, a notice was posted at the hotel informing residents that hot water would be shut off starting Monday, July 19, and every day afterward until Saturday, July 24, the last day of the program. The notice said this was prompted by “construction being performed.” A mobile shower units would be brought to the hotel during this time, officials said.

The Los Angeles Daily News reached out to the city officials last week about the hot water being shut off, but did not get a response as of Monday afternoon. A term in the lease contract gives the hotel owner the ability to shut off utilities, including hot water.

Meanwhile, the demand letter issued by Project Roomkey residents came after participants of the program said they received notices telling them of last-minute or unexpected changes to the program’s closure date, and when they would need to exit the hotel.

The Project Roomkey site is operated by the city of Los Angeles, under a lease agreement reached with the owner of the Sportsmen’s Lodge nearly a year ago, at the end of July 2020. Initially it was set to be a 90-day lease, but it was amended at least two times. The most recent amendment posted on the city website states that the end of the contract term is July 30.

Questions to the office of City Administrative Officer Matthew Szabo about the changes to the end date of the Project Roomkey program were referred to the office of Los Angeles Mayor Eric Garcetti. The Los Angeles Daily News sought a response from the mayor’s office last Friday, but their office has yet to a provide a response, as of early Monday afternoon.

Some residents said they potentially faced instructions to leave even earlier than July 24. A notice dated July 13 appeared to have been provided only to some residents who were selected to be part of a particular group. It informed them that by signing the statement, they were acknowledging that if they refuse to be transferred to an “A Bridge Home site” they would need to “transition out of the LAFH Project Room Key Site at Sportsmen’s Lodge by Friday, July 16, 2021.”

It is unclear how many people remain at the site. A representative for the service provider at the site, LA Family Housing, said late Friday that they do not have a firm number to provide.

On July 6, LA Family Housing Director Stephanie Klasky-Gamer said there were still 117 people at Sportsmen’s Lodge. By then, an initial group of about 57 residents had already been moved to a nearby motel to stay for up to 60 days, while service providers work to match them with more permanent housing situations. Temporary motel vouchers were used to pay for their stay at this motel.

LA Family Housing representatives have also referred the Los Angeles Daily News to the Los Angeles Homeless Services Authority for questions about how Project Roomkey clients at the Sportsmen’s Lodge were being matched with shelter and hotels. A spokesperson at LAHSA said they would look into the situation and respond later.

LAHSA is the lead agency that determines how services around homelessness are provided throughout Los Angeles County, where hundreds of thousands of Angelenos do not have access to affordable housing in the region.

LAHSA officials say that even amid record levels of housing and shelter placements by homeless services providers, the number of people falling into homelessness throughout Los Angeles County has also been increasing. They also cite figures from the California Housing Partnership, which stated in a 2021 report that 499,430 low-income renter households in Los Angeles County do not have access to an affordable home.”

The Studio City hotel has been the site of the emergency shelter-in-place program since last summer, providing rooms during the pandemic to older people or those with underlying medical conditions that put them at higher risk for severe reactions from COVID-19. The program is now scheduled to end July 24, several days before the lease between the city and the hotel owner is set to end on July 30.

Participants of the program said they have sometimes received conflicting, last-minute information from the operator, LA Family Housing, and it was unclear how decisions were being made about where people are ultimately placed, and why the program is closing at the end of the month.

Meanwhile, the demand letter from the Project Roomkey participants also stated that they were working to comply with whatever instructions service providers were giving them to get placed into permanent housing.

“We are all doing our due diligence in working towards permanent housing; we have begun filling out our applications for EHV (emergency housing vouchers) vouchers, and wish to continue working with our case managers and housing navigators to secure housing,” the letter said. “We are fulfilling our responsibilities in this equation, and we believe it is time for the city to fulfill their obligations to us.”