Home office demand takes off as pandemic drags on 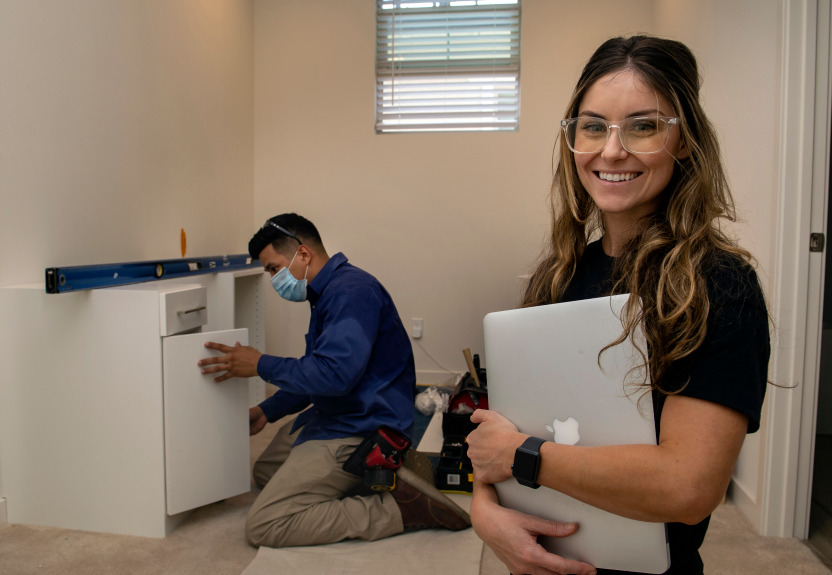 After seven months of working out of a makeshift workspace in the loft of her two-story home, Rachel Quigley is ditching her plain, wooden desk for a permanent home office with all the trimmings.

It will have a 7 1/2-foot-long built-in desk with room for computers and a printer, drawers and cabinets as well as a spare workstation for her trainees.

“We wanted to make it more of an office space and less of a loft,” said Quigley, 31, of San Juan Capistrano, a real estate transaction coordinator who would split her time between offices in Long Beach and La Mirada before the pandemic hit. “Right now, it’s just a desk up there. It’s not very functional.”

With COVID-19 still spreading and widespread distribution of a vaccine at least half a year off, Americans are digging in for the long haul, buying computer desks and chairs in droves and adding or converting rooms into professional home offices.

The Brookings Institute reported that up to half of American employees were working from home last spring, up from 19% in 2017-18. Experts expect telecommuting to stick long after the pandemic ends, and one USC architecture professor predicted just 50-75% of workers will return to the office post-COVID. Indeed, some companies — including Twitter and Facebook — announced plans to allow employees to continue telecommuting well in the future.

Thanks to the coronavirus, the work-from-home trend is changing our lives, experts say, possibly reshaping our offices, homes and neighborhoods.

“The implications are much more permanent than originally thought,” Dana Cuff, a UCLA professor of Architecture and Urban Design and founding director of cityLAB, said during an interview on KPCC-FM.

Just as health scares of centuries past spawned innovations in home design, the coronavirus may also have lasting impacts in our abodes, experts like Cuff say.

For example, ground-floor powder rooms became popular in the early 20th century to give ice and coal delivery men a place to go to the bathroom without invading a family’s private lavatory, according to Architecture Digest. Closets replaced unsanitary armoires because they were easier to clean.

Today, homes are changing to provide places for work, said John Dutton, a USC adjunct professor of Architecture and a principal at Dutton Architects.

“I think we are going to have more adaptability and flexibility of spaces,” he said in an email. “These might be small rooms and nooks that can be sectioned off … for work or homework.”

And what will be the fate of office towers?

The Allen Matkins/UCLA Anderson Forecast’s latest survey of commercial real estate developers found most expect demand for office space to decrease due to work-from-home policies, with rising vacancy rates and lower rents for the next three years.

But another survey by commercial brokerage Newmark Knight Frank found that 70% of company executives said their employees want to return to the office full time once a vaccine is available.

“We’re going to need the office for collaboration and cultural experiences,” said Ryan Harding, a Los Angeles-based office and industrial broker at Newmark.

However, 10% of those responding to the Newmark survey said they don’t expect to return to their worksites ever — at least not full time.

“The home office is probably here to stay for the foreseeable future,” Harding said.

Los Angeles-based KB Home launched its “home office concept” in August, which converts a spare bedroom or den into a built-in workspace with a desk, cabinets, shelves and wiring for all types of computers and devices.

In addition, Lennar began pitching its Next Gen floor plans last summer for its home-office potential.

Lennar’s multiple-generation “home within a home” comes with its own entrance, bedroom, living room, bathroom and kitchenette.

Ventura County renters Mike and Lisa Duncan recently paid just under $2 million for a Next Gen home in Irvine soon after Mike took a new job in the area. Both are working remotely and plan to put their offices in their Next Gen suite so they can work as their nanny and two sons — ages 9 months and 3 — have the run of the house.

“We were pretty happy … because we’ll be working from home for the foreseeable future,” said Mike, 35, a digital technology specialist. “With the kids running around, we won’t have that distraction.”

“Desks and task chairs have been two of the most popular items customers have purchased in the last six months,” said Phil Cerrone, general manager of office for Wayfair’s business-to-business arm, Wayfair Professional.

Sales of backyard sheds that function as an office also are booming because they’re relatively cheap, easy to install and are so small, they don’t require a building permit.

The prefabricated sheds have finished interiors similar to a home, including insulation, drywall, electrical wiring and flooring.

One company, Kanga Room Systems of Waco, Texas, reported a 250% increase in the past four to six months in sales of its “Kwik Rooms,” which are used primarily as home offices, Jason Ellis, company owner and chief designer, said in an email.

Colorado-based Studio Shed reported a four-fold increase in sales of products typically used as home offices, said Victoria Hagen, a company spokeswoman. The two products most commonly used as home offices sell for around $11,000 to $15,000 for the basic shell, with added costs for finishes and installation.

“People … have a feeling they’ll be working from home a long time,” Cassidy said. “They’re taking the opportunity to turn their homes into a space it really needs to be for them.”

The Quigleys in San Juan Capistrano are a case in point.

Rachel Quigley’s husband, Jon, a project manager for DPR Construction, has been working on a makeshift desk in the kitchen since March. When he has Zoom meetings, Rachel has to stay upstairs.

Rachel already worked from home a couple of days a week but has been up in her 10-by-6-foot loft full time since March.

The couple is only able to fix up Rachel’s office for now, paying just under $2,000 for the makeover.

“It’s going to improve her (workspace) a lot, not having a fold-out desk, having a place for the printer,” Jon Quigley said. “I probably have to do something in the future with my office space. I don’t think it will be back to the way it used to be. It’s a new normal.”