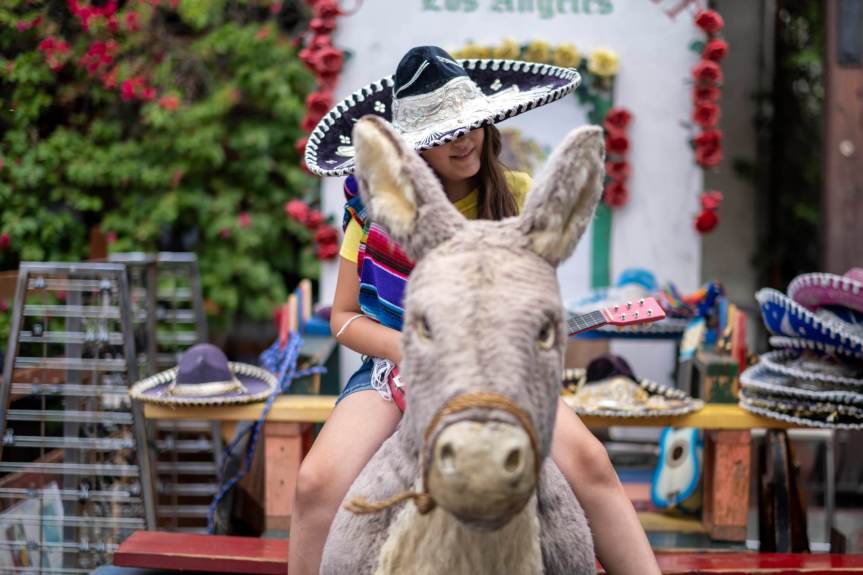 Juliette Valenzuela sat atop Jorge, the well-used, life-sized burro replica, her head adorned with a sombrero and a brightly colored blanket around her shoulders. The 9-year-old from Stockton smiled as she had her photo taken as a reminder of her trip to the historic birthplace of Los Angeles, Olvera Street.

“I like it here,” she said as she climbed down to continue her search for souvenirs in the many brightly colored kiosks that line the brick street with her mother and father.

The historic street located in the northeast of Los Angeles between Main and Alameda streets — part of the El Pueblo de Los Angeles Historic Monument — is a favorite attraction for locals and tourists alike. Since its opening as a traditional Mexican marketplace in 1930, people have enjoyed the food, music, events, and merchandise.

The pandemic changed that.

The shops and restaurants closed, the music silenced and the brick-lined street emptied.

Richard Chase, who has been snapping photos of people on the back of a burro since he was 13-years old, almost lost everything.

“I was almost homeless last year. It was right before Cinco de Mayo, and they shut us down; we weren’t expecting that,” he said of the mandatory closures.

“We went through our savings; we’re self-employed, a lot of us didn’t qualify for any financial assistance. It was tough, really tough.”

The 57-year old Chase, who runs the family-owned business with his wife, kept afloat by designing and selling face coverings during the shutdown. He is hopeful that a return to pre-pandemic business is around the corner.

Many of the businesses are stilled owned by the families that opened them early in the 20th Century. Most survived the pandemic, but some did not.

“Almost all the shops are reopened with the exception of maybe four or five,” said Arturo Chavez, general manager for El Pueblo de Los Angeles. “We have temporary shops that have left; we had a couple of candy shops that stopped coming in, not renewing their leases. The large restaurant La Golondrina is currently closed. Their family has been here since 1930; they are looking at what they are going to do. We look forward to them opening soon.”

Olvera Street is one of the most popular tourist destinations in Los Angeles. Pre-pandemic, buses filled with travelers would arrive daily, filling the street with visitors from around the globe before the shutdown.

“We don’t have international tourism now, which has been a big boost for us many years,” said Chavez.

Another big attraction are the cultural events that took place many times a year. Events such as the Cinco de Mayo Festival, Dia de Los Muertos, Blessing of the Animals and Fiestas Patrias would bring thousands of visitors to the El Pueblo de Los Angeles.

“These kinds of events bring crowds in and help maintain the businesses in the street,” Chavez said. “We are looking forward to this year, to be able to open some cultural events.”

Carmen Munoz has been selling candy at Lupe’s Candy Shop for 35 years.  She can’t remember so few customers spending their money to get their sweet-tooth fix.

At first, the shop was only open on the weekend after the pandemic reopening, but it is now open every day.

When asked about how business has been, she says, ” So-so. During the week it is very slow, but business is very good when the Dodgers play. Usually there is a lot of people in the summer but not this summer.”

A heaping plate with tacos, enchiladas, taquitos, rice and beans — the A special at La Noche Buena restaurant — can be had for a mere $10.95. It’s one of the favorites for regulars and first-timers, according to Eduardo Lopez, a cook, cashier, waiter at the 91-year old restaurant.

He still is not seeing many of the faces that would regularly come to the establishment. “I had customers that use to come here every day. They told me that because of the pandemic, they lost their jobs and don’t have the opportunity to come here.”

Lopez also feels that there is still some pandemic fear that is keeping people from returning.

Felix Munoz started working on Olvera Street in 1979 after arriving from Mexico City.

He bought his store Mi Tiendita 13 years ago and is grateful for all that he has achieved. He calls it a convenience store, and when you walk down a few steps and enter the little store, you will find colorful toys, piñatas, maracas, pots, pans, candy, soda — all from Mexico.

“Business has been slow, but we are surviving,” he says as a man in a mechanic uniform comes in and asks if he has Red Bull.

“Yes, that is three dollars,” he says in Spanish to the customer. With the energy drink sold, Munoz quickly answers a question about some rope necklaces for another customer.

When asked if he has ever seen so few customers before, he quickly answers, “In 1984, the Olympics, it was very slow because people were afraid the traffic was going to be bad.”

He isn’t worried, he said.  “Customers are starting to come back,” he said with a smile.

The old street with the oldest house in Los Angeles, the Avila Adobe, has survived wars, earthquakes, civil unrest, and much more, including a pandemic.

Most remain hopeful that the Mexican marketplace will be back and bustling once again.

Chavez looks around and looks pleased to see people making their way through the old street in his care.

“I am optimistic in people coming out; there is good news, most of the shops are open, most of the restaurants are open right now. We are inviting people to come to visit us. We want people to support an age-old place, a place that is historical for us.”

He, and others here, share a belief: Olvera Street is here to stay.