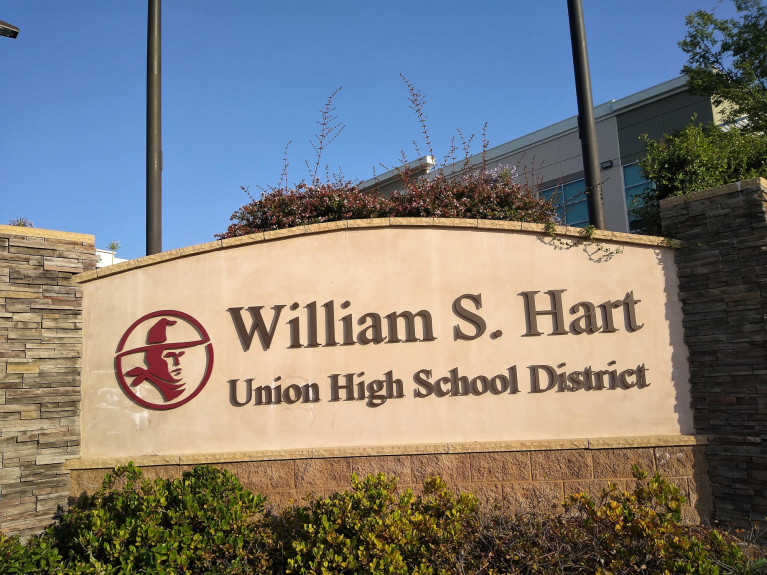 The William S. Hart Union HIgh School District board voted 4-1 to replace the high school’s Indians mascot by 2025 at its meeting Wednesday, July 14.

Members of the Santa Clarita-area community, Hart High students and graduates, parents and staff members exchanged heated remarks about the fate of the mascot during the meeting. At times, Cherise Moore, the president of the board, warned those in attendance to refrain from outbursts and threatened to have disruptive people removed by a sheriff’s deputy.

To resolve the discussion, school board member Bob Jensen made a detailed proposal to retire the Indians mascot by June 30, 2025.

“It’s important for me to find a way to do things that are educational related,” Jensen said. “That’s what it’s all about. Being a school board member is looking at it from a lense of education and how can we best educate everybody.”

The Indians have been the mascot of Hart High School in Newhall since it was founded in 1945.

More than 100 people attended the meeting and the crowd overflowed out of the board meeting room into the entrance of the school district building. Some in attendance stood in the board room and nearly 50 people requested to speak during the meeting.

“It’s been a hard-fought battle, but I respect their decision,” she said. “I’m not terribly surprised by it, considering the times that we’re in and the culture and this climate of change. I think that they did, somewhat, of a compromise and at least the students that are in the school currently won’t have to have the change.”

David Barlavi, a member of the Saugus Union School District in Santa Clarita, applauded the board’s decision, but said he would have liked to see the change happen more quickly.

“They could have done it in 12 months or 24 months,” Barlavi said. “Four years seems more like an electioneering type thing, leaving it open to change, more havoc with new board members coming in.”

Barlavi added that it was clear Jensen listened to the concerns of the Fernandeno-Tataviam Band of Mission Indians and included ways to honor their history and traditions.

“As far as the details of the plan, I liked that it was educational oriented, I like how he was trying to pay respect with murals and things of that nature,” Barlavi said.

Moore said she believes the school board made the right decision, though it proved challenging.

Many Native American-themed mascots have been retired by high schools in Southern California:

The NFL team in Washington, D.C., is no longer using a term many deemed offensive for decades as its mascot, opting for the “Washington Football Team” instead for the past two seasons. The team expects to announce a new nickname early next year.  However, such pro sports teams as Major League Baseball’s Atlanta Braves and Cleveland Indians, the National Hockey League’s Chicago Blackhawks and NFL football’s Kansas City Chiefs still maintain Indian-themed nicknames.

The “R-word,” the Washington team’s former nickname, was banned by the state of California for use by public schools. Then-Gov. Jerry Brown signed the law, launched in 2017, which includes the “prohibition of derogatory and discriminatory names or team names or mascots in public schools and prohibition of the use of any derogatory term that singles out the Native American community.”

State legislators in Colorado and Nevada voted last month to bar public schools from adopting Native American mascots, according to The Hill.  Washington state passed a similar measure earlier this year; Maine took the same action in 2019.  Connecticut and Massachusetts are expected to consider similar initiatives this year.

The debate over such mascots is not new. Efforts to oppose Native American mascots date back to the 1960s. Stanford University became the “Cardinal” back in 1975, dropping the nickname Indians. And a  survey conducted by the American Psychological Association in 2005 sparked the organization to call for the retirement of such mascots and team themes, citing ” the harmful effects of racial stereotyping and inaccurate racial portrayals, including the particularly harmful effects of American Indian sports mascots on the social identity development and self-esteem of American Indian young people.”

Locally, Moore said she understands how important traditions are to people in the community. But she also recognized it was time to make a change with the Hart High mascot.

“I understand traditions. I understand different perspectives around this issue around the mascot matter,” Moore said. “It wasn’t OK to leave things as they were when I know there are people that are hurting.”