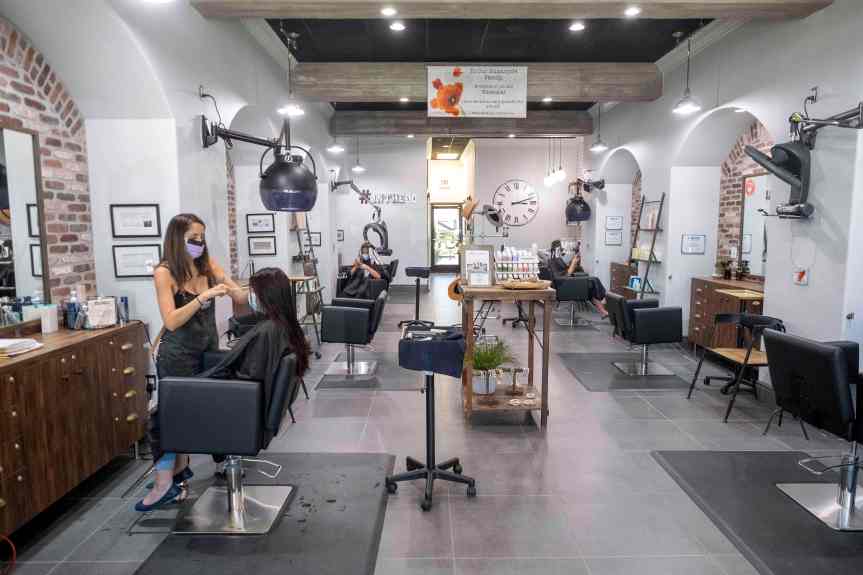 It wouldn’t be long after Gov. Gavin Newsom announced a new pandemic recovery “blueprint” Friday before Julie Allen’s cell phone blew up with text messages from eager customers ready to get their hair done at her Scissory No. 54 salon in Santa Clarita.

“Congratulations!” they declared. Appointments were promptly secured — starting this week.

All told, she logged 64 texts as the afternoon wore on, a good sign for a businesswoman whose shop was hit hard by the pandemic.

After months of being closed to indoor operations, she spied some daylight under the state’s new system. Hair salons and barbershops could open “with modifications,” the governor declared.

But then came a statement from Los Angeles County: basically, “hold on a minute.”

The state’s new “Blueprint for a Safer Economy” allowed such shops to open, but only in accordance with county health orders. State law doesn’t allow a county to make the state’s orders less strict. But counties can make them tougher, based on local conditions and the health order already in place.

That order – — issued July 15 amid a stunning summer resurgence of the virus in L.A. County — requires such businesses to operate outdoors only, for now.

“It’s disappointing,” she said, “but you know they’re going by the cases.”

That’s why Alvarado, Allen and their scissor-wielding counterparts are now waiting nervously for Tuesday, when county supervisors will meet with the county’s Health Director Barbara Ferrer to determine if any move will be made to bring salons back in from outside.

“We recognize the state has allowed us to open and we want to do it in a very thoughtful process, so tomorrow we’ll be discussing and will make an announcement hopefully tomorrow afternoon,” L.A. County Supervisor Kathryn Barger said Monday.

Officials from Long Beach and Pasadena, cities within the county that operate their own independent health departments, said they were reviewing the system, too.

Long Beach Mayor Robert Garcia on Friday said officials from all three health departments in the county — the independent agencies for Long Beach and Pasadena, and the LA County Department of Public Health — will jointly decide how to move forward.

It couldn’t come soon enough for many haircutters, even as they scrambled to provide outdoor areas as permitted by the California Board of Barbering and Cosmetology and local zoning ordinances.

“That would be an excellent thing!” Allen said, mindful of the prospect of the county aligning with the state guidance.

That guidance includes a range of  protection practices, from regular cleaning and assignments to installing air cleaners.

The situation has left her business in a difficult spot.

Tuesday’s discussion will be reminiscent of May, when the county was also considering easing up on stay-home orders, which had blanketed the region since March when the pandemic first gripped the community.

At the time, as county virus statistics improved, many people pushed elected officials to allow shuttered businesses to return to “normal” practices.

But surging caseloads and deaths after Memorial Day and the Fourth of July led to toughened restrictions on indoor businesses at salons and restaurants.

Many Southern California businesses defied the order, though. Some businesses welcomed customers inside, drawing the ire of public health officials wary of continued community transmission.

Salon owners argued that customers were safer inside their shops, where they could assure more hygienic conditions than at makeshift outdoor settings.

Lu Garcia Reynoso, who operates a small shop called Barber Society in Gardena, was one of dozens of salon owners to defy health orders and open to customers inside two weeks ago. Since then, she said, she’s seen about 100 clients, following all the safety protocols, including temperature taking and completing contact-tracing forms.

“We went from defying the governor to now defying the county,” she said. “It’s definitely frustrating. We go one step forward and then it’s two steps back.”

Reynoso received a letter from the state Board of Barbery on Friday saying they received an anonymous tip about them offering services indoors. The letter told them to move services outside. Reynoso says that is impossible for her as the shop is located toward the rear of a shopping center. The only outdoor area is near the complex’s dumpsters.

Reynoso said learning of the governer’s order Friday was bittersweet. While many hair salons and barbers can return to indoor operations in the state, a fight remains for nail salons and skin care businesses.

“They’ve moved the finish line a little bit further….and we just have to keep going,” she said.

Reynoso said she was hopeful everyone could get back to work by Labor Day.

L.A. County Public Health Officer Dr. Muntu Davis on Monday said the county’s numbers were heading in the right direction, but there was an added layer of vigilance as holiday weekend drew near.

“The ultimate decision about sector reopenings will remain under the purview of the county health officer orders that are developed in consultation with our Board of Supervisors,” Davis said Monday.

In other words, it’s not a slam dunk that the order will be eased.

To improve its ranking in the four-tiered program, L.A. County must record numbers below an average of 7 cases per day per 100,000 and below an 8% positivity rate. Moving to a new level allows more businesses and activities to open with fewer restrictions and increased capacity for customers.

As it stands, the county reports 13 cases per day per 100,000 people, with a 5% positivity rate. Even when it attains the qualifying numbers, the county will have to wait three weeks to assure the statistics are stable.

“Our our path for recovery depends on us being able to reduce transmission significantly so children and teachers can get back into their classrooms and more people can get back to their jobs as safely as possible,” Davis said.

On Monday, Alvarado and her peers waited anxiously for the news.