Gov. Newsom says he and MLB in ‘advanced talks’ about letting fans attend games this season 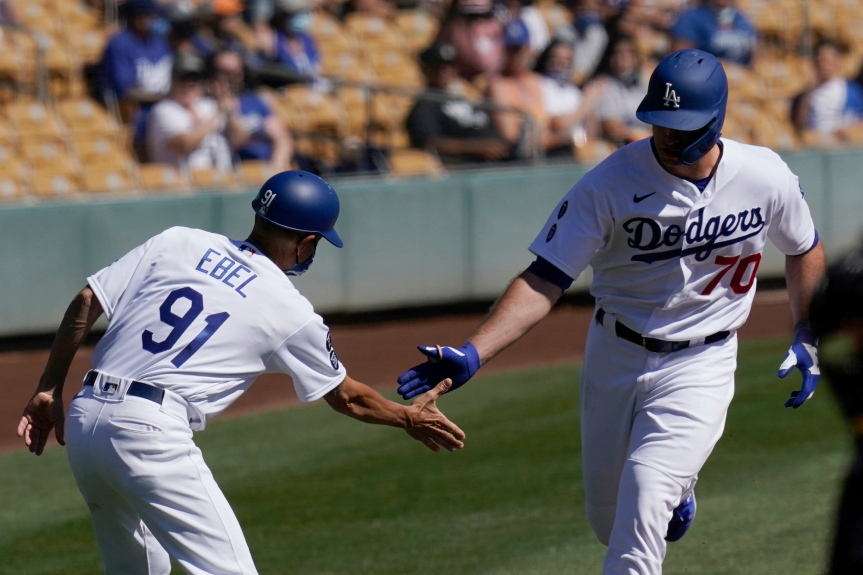 Gov. Gavin Newsom is in “advanced talks” with Major League Baseball about allowing some fans to attend games this season, bolstering the cautious optimism among some that the Dodgers and Angels could at least partially fill their stadiums this summer after entertaining cardboard cutouts last year.

Newsom made that comment during a visit to a Cal State Long Beach vaccination site Wednesday, March 3, less than a week after spring training games began. The regular season begins April 1.

The coronavirus pandemic forced MLB to delay its season last year. And once it did begin, it was severely truncated — a 60-game sprint rather than the traditional 162-game marathon. Fans were also deprived of the annual summer rite of sitting in sun-soaked stands, eating a hotdog and peanuts, and watching their favorite baseball teams, particularly the Dodgers, Angels and San Diego Padres among Southern Californians.

Instead, they largely watched on television, though a few fans were allowed to attend the National League Championship Series and the World Series in-person at a neutral site in Texas, which culminated in the Dodgers winning their first championship in 32 years.

But since the beginning of 2021, coronavirus cases, hospitalizations and deaths have trended downward. Increasing vaccinations and spring training sites in Florida and Arizona allowing some fans have bolstered hopes among baseball-deprived fans — and the franchises that depend on ticket and concession sales — that viewing games in-person could happen after all.

“We have confidence that when you look forward to April, to opening day,” Newsom said, “and where we are likely to be if we all do our jobs, if we don’t let our guard down and spike the ball — wrong sport — then I have all the confidence in the world that fans will be back safely, in a lot of these outdoor venues.”

Newsom, though, did not provide details during his Long Beach visit about how reopening baseball stadiums would work. His office also declined to comment when asked for details.

The MLB Office of the Commissioner did not respond to request for comment.

Under current statewide guidelines, however, in-person attendance and Major League games appear a ways off.

The tiered system, which dictates which businesses can open when, allows in-person attendance at outdoor sporting events — at 20% of capacity — once a county reaches the “orange” tier. That tier is the third-most restrictive and means there is a moderate risk of spreading the coronavirus. To reach that tier, a county must an adjusted case rate of 3.9 or fewer per 100,000 residents and a positivity rate of 5.2% or less.

None of the five counties that are home to MLB teams — the Angels, the Oakland Athletics, the San Francisco Giants, the Padres and the Dodgers — are currently in the orange tier.

In fact, all but one of those counties remain in the most-restrictive “purple” tier; San Francisco County is in the “red” tier, which falls between purple and orange.

To move out of the purple tier, a county must reduce its case rate to seven or fewer per 100,000 residents and its positivity rate to 8% or lower. And while those counties are on the verge of going to the red tier, if downward trends continue, the gap between there and the orange tier may take time to narrow.

And those trendlines are dependent on vaccine distribution continuing and potentially worrisome coronavirus variants not causing another spike.

“We have to stay vigilant,” Newsom said Wednesday. “The virus does not take spring break off.”

But even if Los Angeles and Orange counties — where the Dodgers and Angeles play — don’t reach the orange tier soon, that doesn’t mean the state couldn’t find a workaround to allow fans to attend games.

The state essentially did the same thing for school districts.

Under the original tiered system, school districts couldn’t reopen campuses for elementary students until the county where they’re based moved to the red tier. But then the state adjusted the plan late last year, allowing counties to resume in-person learning the their case rate fell to 25 per 100,000 residents.

But even that came with a caveat: Before letting students back on campuses, school districts must submit a reopening plan to the state for approval.

With so few details, though, it’s not yet known what a deal between MLB and Newsom would look like. But Newsom said there will be an update soon.

“We will socialize those conversations very, very shortly, we’re working on the final details,” Newsom said. “We’ve been working very closely with Major League Baseball, others across the spectrum, working with local health officers, and we’ll be updating those guidelines as well.”

One possible option would be to follow the model used in the World Series, where some fans were allowed to attend games, but had to be socially distanced.

“It was a huge difference in Texas when there was 10,000 people in the stands (during the NLCS and World Series),” the Dodgers’ star slugger Cody Bellinger said. “It felt like 40,000.

“Definitely won’t take that for granted ever again,” he added

Indeed, having fans is something both players and team officials want.

“Last year, I thought the way it all turned out was tremendous,” Angels manager Joe Maddon said. “But I also believe that if that were the norm over a long period of time, 162 games, it would be difficult for the guys to maintain that kind of energy and enthusiasm.

“So we need them back. We need to fans back in the stands,” he added. “They are why we do this.”

While the deep-pocketed Dodgers did sign reigning NL Cy Young winner Trevor Bauer to a massive three-year contract over the winter, including paying him $40 million this year, there were signs the pandemic took a financial toll.

Not long after the Dodgers won the World Series, the organization laid off dozens of employees across virtually all departments. And team president and CEO Stan Kasten said at the time that the franchise’s financial losses were “north of $100 million” in 2020.

“While the Dodgers had a championship season, the organization has not been immune from the widespread economic devastation caused by the coronavirus,” the Dodgers said in a statement acknowledging the layoffs in November. “Since March, we have worked hard to minimize the impact on our employees. The ongoing economic crisis, however, forces us to make difficult personnel decisions throughout the organization, going forward for the 2021 season.”

In a video message to season-ticket holders last week, Kasten was more sanguine about the future, expressing optimism that fans will be able to attend games at Dodger Stadium this season, as early as Opening Day.

“We’re going to start selling tickets to our games,” Kasten said in the video.

“We don’t know yet how many we are going to have here in California,” he added. “But we are working with local health officials, we’re working with the governor’s office.”

The Dodgers open the season on the road against the Colorado Rockies on April 1 and have their home opener April 9 against the Washington Nationals. The Angels open their season at home against the Chicago White Sox on April 1.