Girl, 14, killed by police gunfire at Burlington in North Hollywood 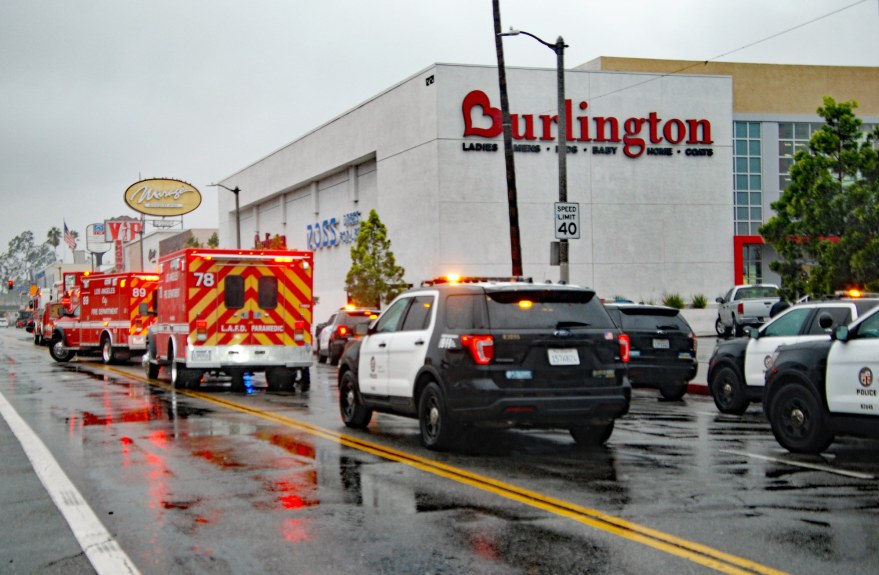 A 14-year-old girl was killed by police gunfire when officers responded to calls of a shooting in a crowded Burlington store in North Hollywood on Thursday, Dec. 23.

The girl was in a dressing room when a police officer’s bullet pierced a wall and struck her, said Assistant LAPD chief Dominic Choi.

A man accused of assaulting a woman – which set off a chaotic scene inside the store – also was shot and killed by police.

Officers had rushed to the area of Victory Boulevard and Laurel Canyon Boulevard at about 11:45 a.m. after receiving multiple reports of a shooting in progress, Capt. Stacy Spell said.

While police were en route to the store, he said, they received additional calls of an active shooter, with descriptions of people sheltering in place and taking cover.

Officers who went inside the store at 12121 Victory Boulevard found the man assaulting the woman, Spell said. It was not immediately clear what type of weapon he had. But at least one officer fired at the suspect, who was taken into custody, and later was pronounced dead.

Upon inspection of the store, police found a bullet hole in a wall connected to a dressing room. Inside the dressing room, they found the teenager dead.

No other suspects were sought.

The shooting will be investigated “from every angle, top to bottom,” LAPD Chief Michel Moore promised in a brief interview Thursday evening.

“Officers responding to reports of shots fired and an assault with deadly weapon went in to try and help people, and to see the loss of a 14-year-old’s life is devastating,” Moore said. “There are no words for the depth of our condolences to her family.”

He added, “No police officer in the country wants something like this to happen.”

Details of what unfolded inside the store, filled with Christmas shoppers, were not immediately released by police.

But a store cashier said the episode began when the man tried to steal a jacket, then got into a loud argument, and people inside the store began to flee down an escalator. She said the man was waiting at the bottom of the escalator, brandishing “something” in his hand, and the crowd reversed direction and ran back upstairs, hiding in places like dressing rooms to try to be safe.

She said she saw the man beat the woman with the object, taking her down to the ground.

After, that, as police were escorting people out of the store, she said, she heard three gunshots.

The cashier did not want her name to be published, saying she fears for her safety. Police were not available late Friday afternoon to confirm her account.

Choi said police did not find a gun belonging to the suspect. “However, until the coroner gets here and we do a full search of the suspect, that won’t be definitive,” he said. “But right now we haven’t located a firearm.”

He also said officers found a “steel or metal cable lock, a very heavy lock,” near the suspect that may have been used in the assault.

Footage posted to social media showed a woman who appeared to have blood on her face walking out of the store.

“We’re at the very preliminary stages of this investigation,” Spell said. “There’s still a lot of surveillance video to review, witnesses to interview (and) we’ll be looking at bodyworn video.”

Moore said he instructed his staff to release a critical incident report detailing the events leading up to the shooting as early as Monday.

“I believe the public, in the interest of transparency, should hear the initial 911 calls to dispatch and bodyworn footage from this incident,” he said, calling Thursday a “dark day” for the city and the police department.

“Preliminary investigation indicates that one of the deaths fell within the scope of AB 1506,” he said in a statement.

Burlington used to be Burlington Coat Factory but the company shortened the name.