Gabriel Fernandez, 8, was tortured to death. His mother didn’t like her life sentence. This is what a judge had to say. 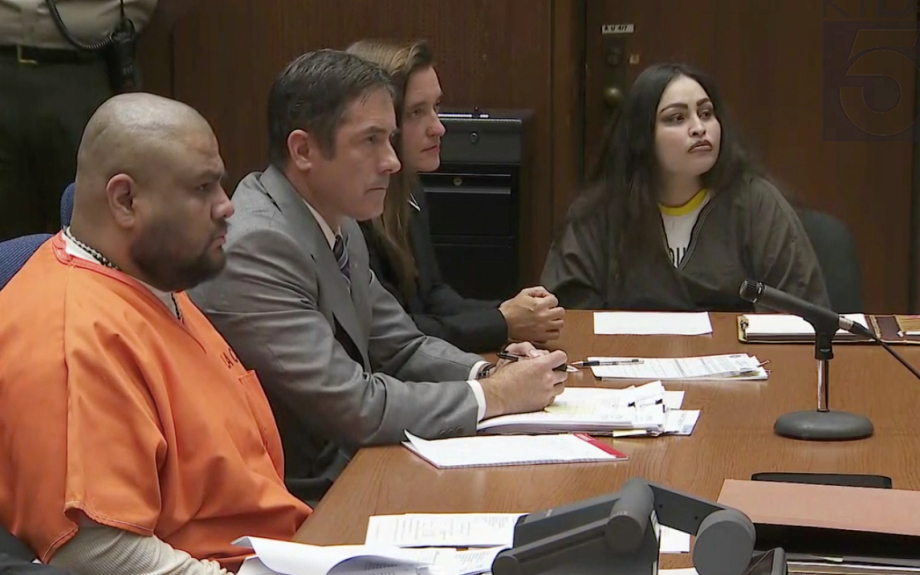 A judge today rejected a bid Tuesday for re-sentencing by a Palmdale woman who pleaded guilty to the first-degree murder of her 8-year-old son, who was routinely beaten, starved, forced to sleep in a closet and tortured until his death eight years ago.

Pearl Fernandez, now 37, was sentenced in March 2018 to life in prison without the possibility of parole for the May 2013 killing of her son, Gabriel, but contended in an April 1 petition that she could not now be convicted of first-degree murder or second-degree murder because of recent changes made in state law that affect defendants in some murder cases.

Her boyfriend, Isauro Aguirre, 40, was sentenced to death. His automatic appeal to the California Supreme Court is pending.

Los Angeles Superior Court Judge George G. Lomeli said he carefully reviewed Fernandez’s petition for re-sentencing along with the overall record of the case and concluded that she is “not entitled to re-sentencing relief.”

“It has been established by her own admission during her guilty plea that the murder was intentional and involved the infliction of torture over a period of several months …,” the judge said, noting that the record supports the theory that Fernandez was a “major participant in the murder of a child victim.”

He added that Fernandez had agreed to waive any and all of her appellate rights at the time of her February 2018 guilty plea.

A group of people who gathered outside court with signs including ones that read “Justice for Gabriel” and “No Mercy for Child Killers” cheered when Deputy District Attorney Jonathan Hatami announced that Fernandez’s petition had been denied. The prosecutor had objected to the woman’s request and urged the judge to deny the petition.

In a Twitter post soon afterward, Hatami said, “The true measure of our community can be found in how we treat our children. I will always stand up and fight for our most vulnerable. Justice was served today.”

At the March 2018 sentencing for Fernandez and Aguirre, the judge called the case “without a doubt the most aggravated and egregious case of torture this court has ever witnessed.”

“You want to say that the conduct was animalistic, but that would be wrong because even animals know how to take care of their young … It’s beyond animalistic,” Lomeli said then, noting that he hoped the two defendants would wake up in the middle of the night thinking about what they had done to the boy.

In denying an automatic motion to reduce the jury’s recommendation of a death sentence for Aguirre to life in prison without the possibility of parole, the judge cited the “repeated beating, binding, burning and starving” of the youngster.

In a brief statement shortly before she was sentenced, the boy’s mother said, “I want to say I’m sorry to my family for what I did … I wish Gabriel was alive. Every day I wish that I made better choices.”

During Aguirre’s trial, prosecutors told jurors that the boy was routinely beaten, shot with a BB gun, forced to eat cat feces and sleep inside a small cabinet while gagged and bound.

Hatami called Aguirre an “evil” man who “liked torturing” the boy and did so systematically in the months leading up to the child’s death. Aguirre hated Gabriel because he thought the boy was gay, according to the prosecutor.

The boy was 7 when the abuse began and was killed three months after he turned 8.

Los Angeles County Fire Department personnel went to the family’s home in the 200 block of East Avenue Q-10 in Palmdale on May 22, 2013, in response to a call that Gabriel was not breathing. He was declared brain-dead that day and taken off life support two days later.

One of Aguirre’s attorneys, Michael Sklar, contended that Fernandez was the one who hit the boy with a belt, shot him with a BB gun and was responsible for much of the abuse prior to his death.

“I think they both pointed the fingers at each other, which sometimes happens in co-defendant cases,” Hatami responded after Fernandez’s plea. “The evidence showed and our office believed that they were both equally culpable in the case, and I think the evidence showed that.”

The judge agreed, saying in 2018 that the evidence indicated that Aguirre was a “major participant.”

The boy’s death and the arrests of Fernandez and Aguirre led to an outcry over the handling of the case by Los Angeles County social workers, who had multiple contacts with the family.

A subsequent investigation led to the filing of criminal charges against two former social workers and their two supervisors. But that case was subsequently dismissed after a state appeals court panel found that the four “never had the requisite duty to control the abusers and did not have care or custody of Gabriel” for purposes of the child abuse charge leveled against them, and were “not officers” within the meaning of the Government Code section involving falsification of public records.