For some Southern Californians, coronavirus pandemic routines here to stay 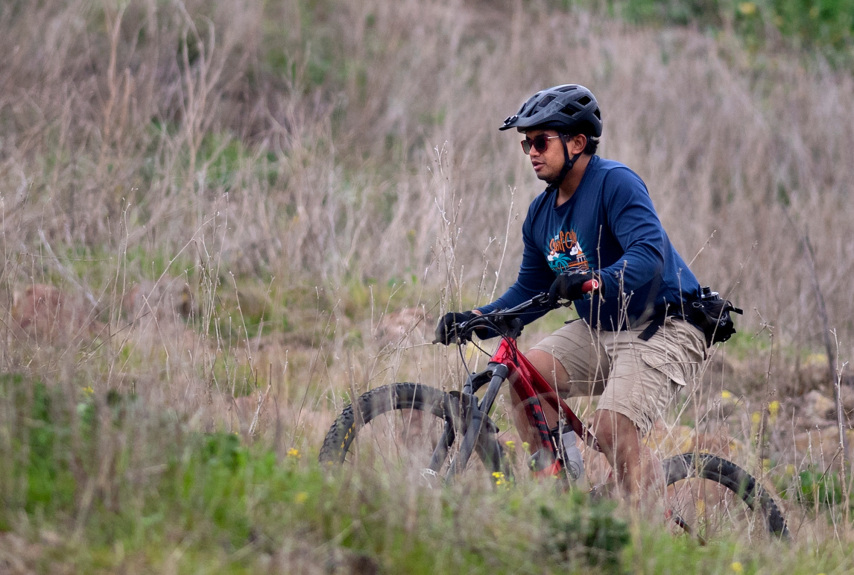 While working from home this past year, Matt Olsen hasn’t had to contend with nightmarish traffic on the 91 Freeway to navigate his 29-mile commute from Corona to Orange County.

“It certainly has enabled me to see a lot more of my family,” said Olsen, who is married and has three children, and works as technical director for a Cypress technology company.

“At the end of a workday, I just go downstairs,” he said. “And I don’t have to worry about what is going on with the freeway that day.”

Now that coronavirus hospitalizations are falling across Southern California and the COVID-19 vaccine is getting into people’s arms, Olsen said preparations are being made for a return to the office. But when he goes back, it likely will be for two or three days a week.

“I don’t think there will ever be a time again when I go into the office every day,” he said.

About one year ago, life was upended in sweeping, unprecedented fashion as schools and universities abruptly shut classrooms and Gov. Gavin Newsom ordered Californians to shelter at home.

And, while society is beginning to reopen, some things may not go back to the way they were.

Commuters may not drive to work as often as they did. New hobbies such as cooking, mountain biking and watching movies on Netflix that emerged during boring lockdown days could become permanent fixtures. And some may avoid crowded gyms after discovering they can stay in shape working out at home.

Wendy Wood, a professor of psychology and business in USC’s Dornsife College of Letters, Arts and Sciences, suggests that whether — and how often — workers return to jobsites may determine how permanent some pandemic lifestyle changes prove to be.

Those who go back five days a week will resume eating out at restaurants and going to the gym after work, said Wood, who wrote the book, “Good Habits, Bad Habits.”

On the other hand, Wood said, the hobby of gardening that flourished because of the extra time people had at home may get nudged aside.

“It just won’t fit into our lifestyle in the same way,” she said.

Some may keep pandemic habits

Wood said some new habits will remain regardless.

People will continue to do much of their shopping online, she said, and watch movies at home.

“At least initially, I expect people to go back to the theater because it’s different,” Wood said.

When the shutdown ends, people will want to get out and do things they haven’t been able to do. “We’re all a little bored,” she said.

“But, ultimately, more people will end up watching movies on Netflix at home because we have gotten used to that,” Wood said. “And it’s so easy.”

Anaheim residents Jim and Kathi Bowman are among those who have grown accustomed to watching movies in the comfort — and safety — of their home.

Kathi Bowman said they expect to continue doing so after the pandemic ends, going to theaters only on special occasions such as “a date night with another couple.”

For the Bowmans, 2020 was a year of cancellation as plans for a cruise to France, Italy and Spain fell through in May.

Even so, Kathi Bowman, who recently retired from her job as executive director of WISEPlace, a shelter for homeless and abused women, found a way to partially revive the cruise.

“I decided to go to those countries via Netflix,” she said. “I’ve gone around the world on Netflix and I’ve visited at least 45 countries. And I’m in Peru right now.”

Kathi Bowman searches for video stories about people, places and history of a particular nation, and spends a week, sometimes two, learning about that country.

The couple in their 70s has made other lifestyle changes.

“Kathi has gotten really good,” Jim Bowman said. “She has gotten all these cookbooks.”

Going forward, they intend to eat out less frequently than in the past.

In another change, Kathi Bowman exercised five days a week at a gym before and now works out on a stationary bike at home.

“I don’t intend to go back to exercising on a machine that someone has been sweating on,” she said.

While some feel trapped in their houses, the Bowmans don’t.

Soup Pha, 34, a singer and recording artist who lives in Woodland Hills, also worked out in a gym before COVID-19 hit.

Stuck at home, Pha said he began to gain weight, reaching 250 pounds on his 5-foot-9 frame. He started having problems with gout.

So he started exercising at home.

Pha said he ran on a treadmill. He did pushups and sit-ups. He did yoga. And he brought his weight down to 172.

“The gout problem has disappeared, but I’m on medication to manage it,” he said.

“I realized that I can still lose weight by working out at home rather than driving to the gym,” he said. “And I can save a lot on gas, too.”

“I wasn’t really looking to get into it,” he said.

Singh said it happened that a friend was shopping for a mountain bike. Singh’s wife asked him if he’d like one, too, so he bought one in June and started riding.

Singh fell in love with the sport. He worked his way up from flat trails to rugged, steep ones.

“And it became more interesting to me,” he said.

Singh said mountain biking got him out of the house while gyms were closed, and helped him appreciate nature more.

“Mentally, it was what I would call a breath of fresh air,” he said.

And there are tangible results. Singh takes satisfaction in getting stronger, faster.

It’s particularly satisfying, he said, to reach the top of a challenging trail.

“I can turn around and say, ‘I climbed that. I did that,’” he said. “I can look around and see how high I am and enjoy the views.”

Singh plans to continue his new hobby after the pandemic is in the rear-view mirror.

“I’ve already got plans for my next bike,” he said, though “my wife says I can’t get another one for two years, so I have to wait.”

As for returning to the office, Christina Hassija, professor and interim chair of Cal State San Bernardino’s Department of Psychology, said she believes most want to.

“As human beings, we all have a need for social interaction,” Hassija said. “And the workplace provides that.”

That’s not to say it won’t be a bumpy transition because going back will mean dressing formally again, in some cases, and contending with traffic, she said.

“Life was so stressful before,” Hassija said. “It will take some time to adjust to the life that we were used to because it has been so long.”

As stressful as it is, Olsen, the Corona commuter, said he sort of misses the 91 Freeway.

“I recall the traffic in a fond way, in a very strange way, because that means normal,” he said.

Olsen is preparing to return to the office part time, while working at home the rest of the week. The office, he said, will become a place to go to “as needed,” rather than a place to report to every day.

So Olsen can look forward to witnessing more of his 2-year-old daughter’s early childhood.

It’s also been nice to spend more time with his two teenage daughters, he said, though they are eager to get back to school and be among friends.

“They have seen enough of me,” he said.