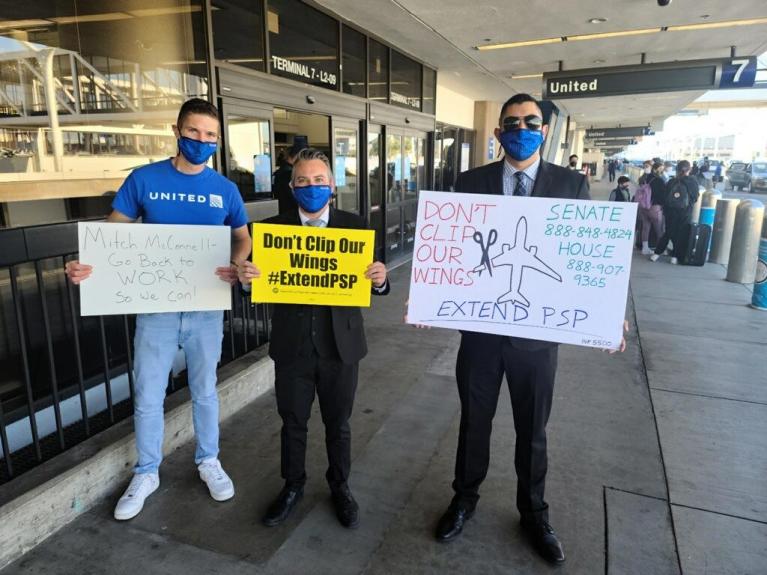 The workers, represented by the Association of Flight Attendants-CWA, were furloughed Oct. 1 amid an ongoing lag in air travel as a result of the coronavirus pandemic. They work for United, American, Hawaiian, Alaska and a host of other airlines.

Flight attendants have gone two months without a paycheck, forcing many to let their healthcare lapse, while others will soon be paying higher premiums through COBRA, a plan that allows them to extend their company coverage but at a much steeper rate.

Latoyya McQueen, a United flight attendant and AMA member, said her monthly premium, which includes a holdover from the company along with a supplement through COBRA, runs $300 a month. But come Jan. 1, the company’s contribution drops off and her COBRA coverage will jump to $1,800 a month.

“I would like a relief package to pass quickly so I can return to work,” the 44-year-old Los Angeles resident said. “All of the aviation workers should be able to get back to work if they just follow the proper (safety) procedures.”

Tuesday’s rally at Terminal 7 was aimed at stressing the urgency of a relief bill before employees are forced to make it through another holiday without a paycheck.

The Payroll Support Program, passed in March as part of the federal CARES Act, kept flight attendants, pilots and other aviation-related workers on the payroll during the pandemic. But those benefits expired Sept. 30, resulting in mass job cuts including thousands of Los Angeles-based jobs.

Harris worked for United before being furloughed in October.

“The airline industry is the backbone of our country,” he said. “We move the vaccines, medications and first responders to wherever they need to go. This is not a partisan issue, but a bipartisan issue to keep workers on the payroll and connected to their healthcare.”

The furloughs have impacted flight attendants and pilots, as well as others working in catering, concessions, custodial operations and executive positions.

Sara Nelson, president of the Association of Flight Attendants-CWA International, said American workers and the U.S. economy are “teetering on the brink of disaster.”

“We cannot afford weeks or months longer without federal rescue aid,” Nelson said in a statement. “This crisis is bigger than any previous economic crisis of the last hundred years combined. We need to act like it.”

The relief package that’s been proposed is not perfect, she said, but it’s a step in the right direction. “This is our best chance right now to get our flying partners back to work — to stabilize our industry,” Nelson said.

“We look forward to fighting for that full and corrective recovery,” Nelson said. “But we can’t do that if we don’t stop the bleeding now.”