Feud over whether San Fernando Valley landowner’s property is dump or park ends, for now 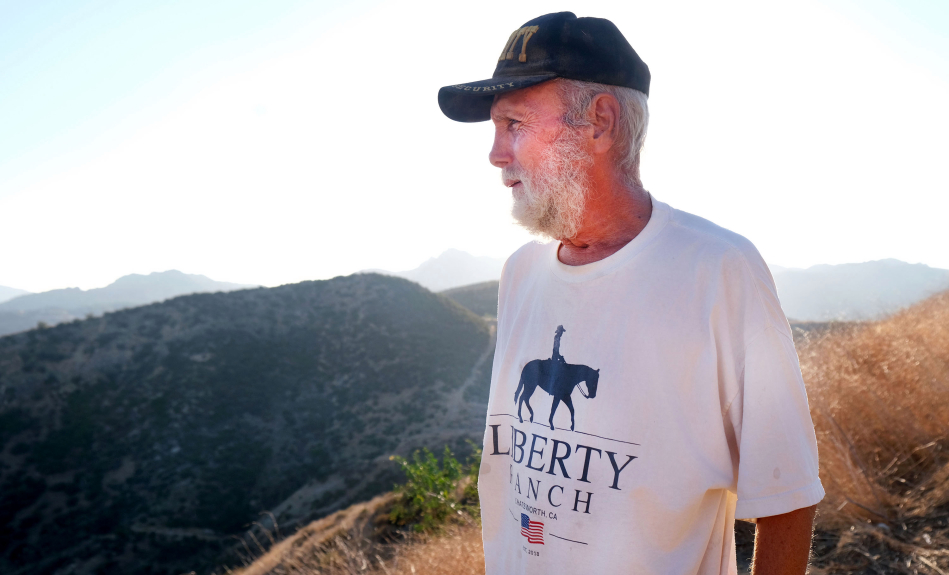 The clock is ticking for Wayne Fishback.

Will he appeal a Los Angeles Superior Court judge’s October ruling that orders him to permanently stop what officials say is the public nuisance happening on Fishback’s giant swath of property in the hills above the northwestern San Fernando Valley?

It’s not an unfamiliar position for Fishback, who has managed to confound local officials, environmental activists and neighbors for years, as the armies of dumptrucks hauling chunks of broken rock and rebar from demolition sites and concrete from dried-out swimming pools, daily climbed a narrow windy road in Browns Canyon to Fishback’s site.

It’s here — Fishback’s “Liberty Ranch” — where they unloaded, paying $100 to $120 a load for the privilege of dumping materials at the massive site. The materials became, literally, the foundation for Fishback’s massive terracing and land-flattening project at the site’s deep canyon. All the while the activity ramped up the decibels in the canyon and led to mounds of complaints from neighbors to environmentalists.

On Oct. 19, after years of legal battle over the activity, the judge said enough.

Judge Stephen P. Pfahler slapped a permanent injunction on Fishback to cease operations on his property — property that amounted to what county officials called a “commercial dump.” Pfahler ruled that the site was a dangerous nuisance that had been operating illegally for years.

“Defendants were required to obtain the appropriate conditional-use permits before beginning their project, which Defendants failed to do,” according to 11-page ruling. “As such, the Court finds that Defendants constructed, established, maintained, altered, moved onto, enlarged, and occupied the Subject Land in a manner that is not permitted by the Los Angeles County Code.”

Not only that, but Fishback made it a business, Pfahler said, noting the charges to dump the debris, despite the lack of a conditional-use permit and proper grading permits for Fishback’s company: Alpha, Bravo, Coca Waste Management Corporation.

The ruling awarded the county more than $6.6 million in civil penalties and attorneys’ fees after a battle that dates back to 2015.

It could be an apparent final blow to a legal war over operations in the canyon land that Fishback owns. But many, including some of Fishback’s foes, aren’t so sure it’s the end for a man who has boldly clashed with county authorities.

In 2007, when he bought 350 acres of land in Browns Canyon, in the sprawling, rugged but golden acreage above the 118 Freeway near Chatsworth, Fishback had brighter and ambitious visions.

Fishback, raised on an Illinois farm, saw a future complete with a dream home in these hills. And then, maybe a giant private park, a recreational area complete with trails and activities that could become a destination for travelers driving up to a spot that is night-and-day different from the bustling San Fernando Valley below. He had visions of a homeless colony, where workers could live and work in the midst of mega estates.

Liberty Ranch…the future. But legal entanglements clouded that future, which for now via the court ruling is the multimillion dollar culmination of a years-long environmental battle over Fishback’s acreage.

The ruling won’t necessarily be a final blow, if Fishback continues to fight it. With depleted resources, he’s contemplating whether he will appeal the decision, along with ramping up his legal claims in federal court.

For the county and its attorneys in the case, the battle was over a fairly straightforward illegal grading/dumping operation, where the county proved it was an unpermitted disposal site.

But for an indignant Fishback, with his vision of a park still in his head, the issue runs deep.

He argues that the county is basically going rogue against him, and circumventing state building codes to force compliance. Lamenting what he said was judicial deference to agencies, he’s still simmering over his inability to get his case in front of a jury.

“You can see the agenda behind this, right? It’s basically to stop development,” he said, looking back now on years of battling with L.A. County and Ventura County over his parcels. “That’s what the big fight I’ve been is all about. Where do we have any civil rights or property protections? Because of the way our Constitution has been all twisted up by case law.”

Pfahler, who ruled on summary judgment before the case ever went to trial, concluded on the evidence that the dump threatened the stability of local hillsides.

Along with the injunction, the ruling required Fishback and the company to obtain required permits and consult with a geologist before moving forward on any use of the land.

The ruling also banned so-called Class 6 commercial dump trucks from entering the hillsides — a practice that will limit the volume of trucks that have negotiated the windy 3.2-mile Browns Canyon Road, which stretches toward Michael D. Antonovich Regional Park and Fishback’s property.

That volume of activity over the years prompted relentless complaints from neighbors about the noise and the toll on the environment.

The judge noted that the work on the land fell within the definition of a county “land reclamation project” — which made land “unsuitable” for many uses restorable, through salvaging “fill materials” such as soil and unwanted materials.

But the required permits never were obtained, and could be doubly hard to get now, given the extensive geological review that would be required and the impact already on the land from Fishback’s activity, officials said.

Not a new battle

The county’s battle with Fishback dates back to 2015, when the county obtained a preliminary injunction after alleging that trucks at Fishback’s site were dumping loads of concrete and construction debris over the hillsides into an ecologically sensitive part of the Santa Susanas. The activity dated back to at least 2014, and created an unstable and unsafe area, officials said.

But Fishback’s interest in the Santa Susana mountains stems from even further back, to the legacy of aerospace in the area.

Back in 2012, Fishback was eyeing a nearby NASA site in the Santa Susanas, which he envisioned becoming a park. At the time, Simi Valley-based Fishback & Associates had contacted a New York-headquartered developer and consulting firm which specialized in preserving historical areas. Consultants had said the NASA land contained structures of historical value that should be open to the public.

That same vision, a park, was at play in the Los Angeles County parcel. Fishback claimed the site was not a dump, but rather an effort to store material and develop terrain that was otherwise not developable.

Nearby residents continued to complain about the activity, sparking a number of orders directing Fishback and his company to cease the operations.

“When it became clear that Mr. Fishback would not comply, the county went in again in early 2018 and filed the a motion to amend the preliminary injunction,” said Jenny Riggs, lead attorney in the L.A. County case, from Meyers Nave, which the county brought in as it became clear the legal battle would be more protracted.

By 2018, Pfahler ruled that the Fishback violated a 2015 order preventing the transport and deposit of concrete and demolition debris on the property.

In January of 2019, the county’s Office of the County Counsel and its outside counsel Meyers Nave, filed a motion to ask the court to find that, as a matter of law, the Fishback’s activities were unlawful and that there was no need for a trial.

Meanwhile, Fishback had issues brewing in neighboring Ventura County on a different piece of land in Simi Valley — reportedly one of the largest illegal disposal sites in the region.

That’s where Fishback told a judge he would soon file a plan to clean up his site, despite the fact that he also said he didn’t have the financial means to comply.

There are those who are sympathetic to Fishback’s situation.

“He’s sort of been perceived as a genius or a kook … but he’s really more on the genius side than a kook,” said Mainak D’Attaray, an attorney who represented Fishback for a time. “His whole idea was to take clean concrete and soil and do something beneficial with it.”

Fishback himself touts his credentials as an architect who knows urban planning. Terracing, he argued, is not a dump but rather a practice that enhances the land.

There are a handful of working ranches in the area fully permitted and in compliance, they said.

There is an active investigation on another property in the canyon called Sacred Oaks Ranch, though they say it is not confirmed that Fishback is part of that operation. In contrast to Fishback’s dumping case, the Sacred Oaks case is an alleged illegal land use case that includes the unpermitted keeping of chickens/fowl, horses, and other animals. Officials said the investigation involves multiple county agencies.

Still, people in the area are concerned that work activity is still going on at the site. Fishback says he employs some homeless people for work during the day. But that’s it at the moment, he said.

Recently, officials said they are looking forward to the refurbish of Brown’s Canyon Equestrian Park, which while nearby is not related to the Fishback case. The park has been a standing goal for L.A. County Supervisor Kathryn Barger, tying into a network of trails in the Santa Susana Mountains.

Other interests in the area include the Santa Monica Mountains Conservancy, which partnered with the county to preserve the Hidden Creeks swath of land, 257 acres once slated for a development, not far from the Aliso Canyon natural gas storage facility.

The ruling on Fishback’s land — obscured publicly recently by the pandemic and the election — still was lauded as the county announced it last month.

While there was a sense of finality in the battle among county officials, Riggs didn’t rule out the possibility would appeal, as Fishback has appealed past actions, she said.

​For now, “the court has issued its ruling. And we think it was very well thought and very well grounded in the law,” Riggs said.

“We’re horrified with what happened, and horrified that it went on for so long,” said Paul Edelman, director of planning and natural resources, for the Santa Monica Monica Mountains Conservancy, a state agency set to preserve local space and which owns thousands of acres around Fishback’s land. “To get some teeth into the rulings, all the better.”

Edelman, whose agency has sparred with Fishback over the activity, was wary of this being the end of the road for Fishback, who he said was “obsessed” with his vision and has found ways over the years to keep his case alive, just when it seemed it was the end.

“I’ve never seen anything like it, where somebody can get away with it for so long,” he said. “No way is it the end, unless he moves.”

“I am thrilled by the decision issued by the Superior Court which represents a significant victory — not only for the county but for the local community that has tolerated this egregious illegal activity significantly impacting their quality of life,” she said. “My staff and I have worked diligently with County Counsel and our partners to seek redress and rectify this situation for several years. The judgment by the court that both immediately halts activity and provides a financial settlement is a fitting end to this ongoing battle.”

Fishback wasn’t ready for that kind of fitting end.

But the next steps haven’t been easy in recent days.

“We’ve lost everything,” he said, noting that he must now move from a home in Simi Valley he’s been in since 1992, and take up in a motor home, where he would live on his land.

“There’s still the appeal. It’s money. It’s all about money. The government is never going to get rid of me.”