Fares are coming back to LA Metro in early 2022 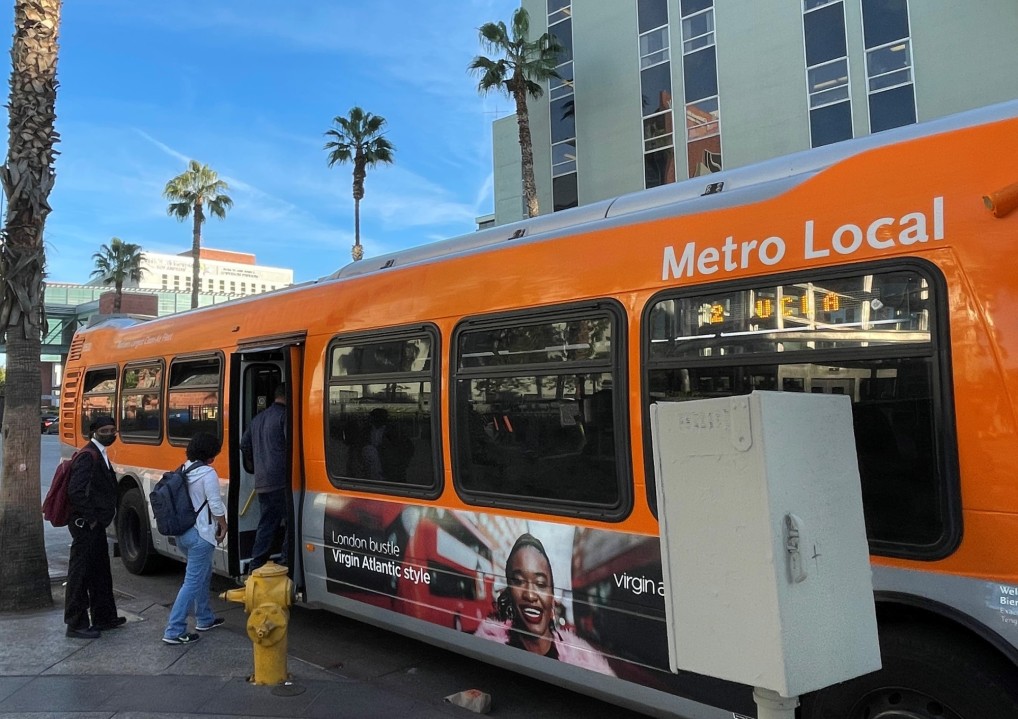 Shortly after the new year, LA Metro’s 22-month run of free bus rides and relaxed enforcement of train fares will come to an end, as the public transit agency resumes charging for rides.

The jolt from switching gears on fares in a time of higher inflation and a wobbly, post-pandemic economy will ripple through the households of nearly 1 million transit riders in Los Angeles County.

For some, the no-fares system in place from the start of the coronavirus pandemic has become a saving grace, especially during a period of joblessness, sickness and loss. Those hit hardest by the return of fare collections on Jan. 10, 2022, will be the 70% of LA Metro riders who have lower incomes.

Some say bus riders who scrape out a living as maids, restaurant workers or freelance laborers will ride less often, as they’re forced to mete out income for medical bills, food, rent and now, transportation.

But those same women found a silver lining in LA Metro canceling fares in order to funnel bus riders to the rear door, safely away from contact with drivers and the fare box.

Some women who work for cash as housekeepers would ride free on a mission scouting for more houses to clean. Shoe-shiners and house painters could find additional clients without spending a cent on transportation, Medrano said.

Money saved from not buying a monthly bus pass, which can cost $100, went to pay for Wi-Fi to power the internet so the children of these workers could attend online school from home. Some used the money to buy groceries for their neighbors, she added.

Medrano wondered how families now accustomed to riding the buses for free will find the extra cash to pay for rides in the future. Many will walk, she said. Some will miss getting out and about.

“I would see older ladies get on the bus, going nowhere, just to not be at home alone,” recounted Medrano, a bus rider herself. “In a way, free public transportation helps people to just be around people, versus being isolated.”

Starting Jan. 10, bus riders must board at the front and pay their fare. Train riders must tap the electronic card reader at the turnstiles or down the platform. The base fare is $1.75 a ride and $100 for a monthly transit pass. Enforcement begins a month later, according to LA Metro.

To ease riders into paying, the LA Metro board approved several limited-time discounts:

• LIFE (Low Income Fare is Easy) program members will get steeper discounts. A weekly pass will be $6.50 and a month pass will be $26 (normally $76). The promotion for income-qualified riders lasts through July 20, 2022. Also, new LIFE members get free rides for the first 90 days after signing up.

• Under a 23-month pilot program approved in this fall, K-12 and community college students ride free. But only at participating school and college districts. Students must activate their new TAP cards to receive free rides.

LA Metro began testing new, user-friendly web portals and paper applications for the LIFE program on Wednesday, Oct. 27. The goal is to double the number of enrollees. Participants can self-attest their income but are subject to penalties if an audit reveals they don’t qualify. A massive marketing campaign will use social media, bus and train placards, radio, TV and newspaper ads as well as pop-up events in low-income regions. More information is available at metro.net/riding/fares/ online.

LA Metro board members and groups advocating a universal fare-less system say the discounts are good, but not as beneficial as totally fare-less. Many riders will fall through the cracks and not register, some say.

“It will be complicated and difficult to put in place,” said Los Angeles City Councilman and LA Metro board member Mike Bonin. “This still presents a lot of barriers to people.”

Oscar Zarate, senior organizer with Strategic Actions for a Just Economy (SAJE), which empowers Spanish-speaking residents of South Los Angeles, said most people in the area are transit-dependent and ride the bus to work, the store, doctors’ offices and to their children’s schools.

Free rides during the pandemic prompted SAJE, the Bus Riders Union and other groups to push harder for LA Metro to keep rides free.

“We want buses to be universally fare-less for everyone,” Zarate said. “That will be most beneficial for working class people who use them every day.”

People served by SAJE are dealing with escalating rent and food prices, while many borrow money to pay utility bills. With the economy still recovering from the effects of COVID-19, now is not the time to resume fares, Zarate said.

“It has to dawn upon the Metro board: The people who depend on the buses, the working class, they will need more than just discounts,” he added.

While even the most sympathetic LA Metro board members agree that fare-less would benefit transit-dependent residents, they say the agency simply doesn’t have the money to forgo collections. LA Metro operates 2,300 buses, four light-rail trains and two subways and is experiencing a steady rise of riders as the pandemic eases.

Average weekday ridership for bus and trains in the first week of October reached 881,008, according to an LA Metro update presented to a board committee on Oct. 21. That’s up from a low of 363,803 in April 2020, shortly after limits on public gatherings were put into place to slow the spread of COVID-19.

Overall, combined ridership in October is at 74% as compared to pre-COVID ridership. Bus ridership is the highest, at 82%, while rail daily boardings are stagnant at about 50%.

Zarate, and even LA Metro officials, say the return to fares, particularly on buses, will drop ridership. LA Metro is banking on new LIFE members to make up the difference.

The agency will lose around $300 million a year in fare revenues if it continues fare-less. That’s too much of a chunk from an operating budget of $2.07 billion, LA Metro says. While the board is studying what a fare-less system would look like, staff put the loss of revenue at $439 million a year and up to $1 billion for two years, when adding extra bus drivers and routes.

“We are hard-pressed to come up with that remainder of funding,” said Los Angeles County Supervisor Hilda Solis and chairperson of the LA Metro board during a recent meeting.

LA Metro only relies on fares for about 13% of its budget, said spokesman Dave Sotero. Most of the monies come from four half-cent sales tax measures passed by voters. In addition, the agency gets federal and state grants for capital projects, such as the extension of the Purple (D Line) to west LA slated to open in 2024-25.

“We already pay for it, but it’s at the point of sale (in sales tax),” said Medrano of WORKS. “So when we get on the bus, why do we have to pay again?”

Alfonso Directo, with the Alliance For Community Transit (ACT LA), said in talking with bus riders, many are concerned about finding the money to pay for rides.

“I think there will be confusion come January,” he said. “They will take the covers off the fare boxes and usher in months of ambiguity and confusion.”

The result could be altercations between riders and drivers, since drivers will require front-door boarding and fare-box payment.

“Fares are the No. 1 reason there is an altercation between rider and driver,” Directo said.

Sheila Kuehl, county supervisor and LA Metro board member, wants to make sure that drivers get training in how to deal with mandatory fare collection.

“There is going to be more pressure on them because people will say ‘No, no, I don’t have to pay a fare,’ ” she said at the board meeting Wednesday, Oct. 28.

David Rodarte, waiting for the 2 bus to Westwood on the corner of Vermont Avenue and Sunset Boulevard in East Hollywood, said he was unaware of the upcoming return to fare collection.

“I think it will actually be a a good thing because it is coming back to something normal,” he said, “instead of going through this pandemic crisis.”