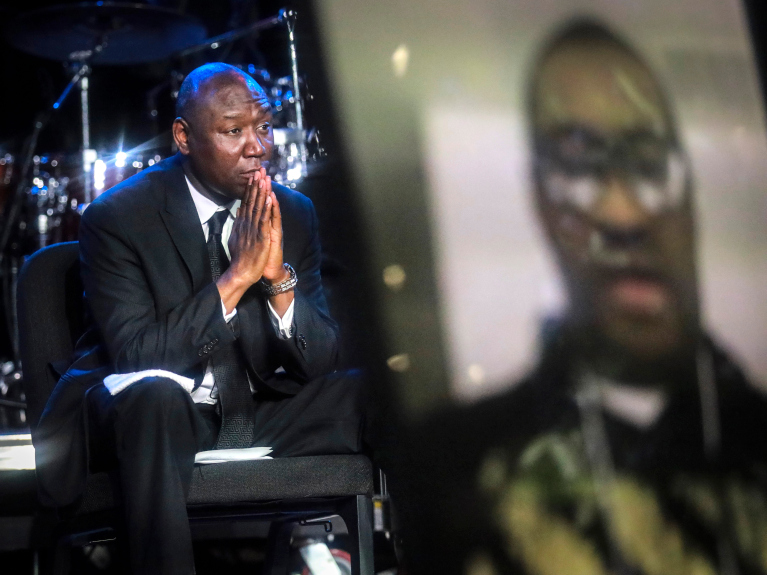 An attorney for the family of George Floyd, the Minneapolis man killed in a violent encounter with police last year, said they were furious over a Valentine’s Day message mocking his death that may have been shared among Los Angeles Police Department officers over the weekend.

Ben Crump, a prominent civil rights lawyer representing Floyd’s family in a lawsuit against the city of Minneapolis, in a statement Monday said the family was “understandably outraged” about the image depicting Floyd next to the words, “You take my breath away.”

Floyd died in May 2020 after a Minneapolis police officer kneeled on his neck during a stop. A widely shared video of the encounter led to massive protests across the country within weeks of his death, including in Los Angeles.

“This is beyond insult on top of injury. It’s injury on top of death,” Crump said in the statement. “The type of callousness and cruelty within a person’s soul for them to do something, evades comprehension and is indicative of a much large problem with the culture of the LAPD.”

LAPD officials on Saturday said an officer filed a complaint about other officers sharing the image, which led to an internal investigation. The officer who submitted the complaint was set to be interviewed Monday.

“The mock valentine underscores the highly problematic, and frankly, racist perceptions that pervade the law enforcement culture regarding the communities we are sworn to protect and serve,” Gascón said in the statement.

“The callous nature of what’s alleged here is exceedingly disturbing, and it speaks volumes to law enforcement’s inability to recognize how harmful the use of unlawful force is to public attitudes about police.”

In their statement, the board of the Los Angeles Police Protective League said they repudiated “this abhorrent image,” and any officers who may have created it or even shared or liked it on social media.

“There must be zero tolerance for this behavior in our profession, and any police officer who feels the need to be part of any online group that engages in, promotes, and/or celebrates this type of activity should quickly rethink their career choice because they clearly don’t have the judgment, nor temperament, to be a member of law enforcement,” the board said in the statement.

LAPD officials said they had not yet determined whether the mock Valentine’s Day message was created by an employee or just shared among a group of employees. But they said the complaint alleged that the image was shared by an LAPD employee while on the job.

LAPD received scrutiny for its response to the widespread protests that erupted across the city in May and June 2020 following Floyd’s death. The National Police Foundation is conducting a review of what critics call violent tactics some riot officers used to quell demonstrations.