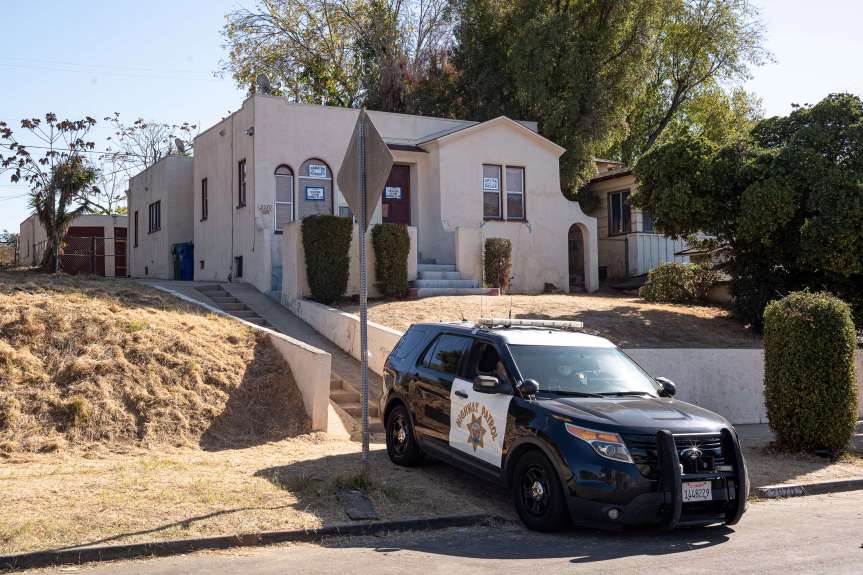 More than a dozen families and individuals who occupied several El Sereno homes owned by Caltrans, the state transportation agency, were forcibly removed as part of an operation conducted by the California Highway Patrol that spanned from Wednesday and into the Thanksgiving weekend.

CHP officers faced off with activists who came out in the last three days to support several families who moved into 20 vacant homes along Sheffield Avenue, Lowell Avenue and several other streets.

The families, part of a group called Reclaim and Rebuild Our Community, moved into the homes on Wednesday, the day before Thanksgiving, and were soon met by highway patrol officers who were deployed at the request of Caltrans officials.

Activists turned out in large numbers in an attempt to block CHP officers at various homes that were being occupied.

Several videos posted on various social media sites from the standoff between dozens of officers and a group of activists showed people being escorted or dragged from the homes. One young person in one video appeared to have been hogtied and carried out by her feet and arms by CHP officers on Wednesday evening.

By Friday morning, many of the families were gathered at 2970 Lowell Ave., which became a “home base” for those who had been shooed out of other vacant homes, said Iris De Anda, a member of Reclaim and Rebuild Our Community.

CHP officers arrested about 20 people from the Lowell Avenue home at around 2:30 a.m., De Anda said.

She described the officers’ approach as aggressive, and said the families were not resisting in a physical way with the officers.

“We were not surprised by the presence of law enforcement,” De Anda said. “But we were very disheartened they came in with such force, especially since we had children present.”

In a news conference held Friday afternoon, one of the activists, Janil Hernández, called on Gov. Gavin Newsom to apologize to the community for the “violence inflicted by CHP.”

The law enforcement agency’s assistance was requested by Caltrans, the spokesperson said.

The Los Angeles Police Department, whose officers also were spotted by activists, was also in the area. A spokesperson, Josh Rubenstein, said they were there for “perimeter protection and traffic control.”

Caltrans spokesman Matt Rocco said Friday that the homes have now been boarded up again. He also referred to a statement from Wednesday that said the vacant homes “that were broken into are unsafe and uninhabitable for occupants.”

“As such, Caltrans requested the CHP remove trespassers so that the properties can be re-secured and boarded up,” the statement read.

Rocco, a Caltrans official, said he did not know any further information beyond what was already in their initial statement on Wednesday.

A three-month-long investigation was conducted by this news group in order to determine that the number of vacant homes in the El Sereno neighborhood had increased by 150% since 2013, to just over 160 properties by July 2019, even as the region and California faced a housing crisis.

The video footage, dramatic confrontation between activists and a large showing of CHP officers came as many families in Los Angeles were connecting with friends and relatives for the Thanksgiving holiday.

Sasha Renée Pérez, mayor-elect of Alhambra — the city that sits adjacent to the El Sereno neighborhood — said she was “disturbed, distraught and shaken” after watching the video of the young person carried out of a home in hog ties. Perez requested the vacant homes be made available immediately to “working families in need of affordable housing.”

State officials said they were in the process of selling the homes, which had once been slated for the 710 Freeway project. Activists who include the families argue that the properties should be used to house people experiencing homelessness. The state has not moved with enough urgency to use the properties to address immediate crises such as homelessness and the COVID-19 pandemic, they said.

In a letter issued Wednesday morning, Reclaim and Rebuild Our Community called on Newsom to “direct Caltrans to allow the new families to immediately turn on all their utilities: heating and running water and electricity are essential to shelter safely in place.”

The families include those with a 3-month-old child and seniors who are 70-years-old who have been living in encampments and cars. The group asked Newsom to direct the state agencies “not to use violent evictions or arrest.”

In addition to the protest harking back to the Great Depression, similar activism that involves occupying a home has sprung up around the country in recent years, most famously in Oakland, where a group of moms facing homelessness took over a property. They were evicted, but were later able to get the housing purchased by a land trust. The mothers said they were moved to take over the property after facing difficulties working to get sheltered through existing programs. Groups in Tacoma and Philadelphia have also launched similar efforts.

Earlier this year, another group in Los Angeles with a similar name, Reclaiming Our Homes, took over several Caltrans-owned homes in the same El Sereno neighborhood. In October, a deal was worked out so that the families were able to move into the homes legally. The state entered into a lease with the Housing Authority of the City of Los Angeles to use 22 of the vacant homes as transitional housing for people facing homelessness. This earlier group was also inspired by the Oakland moms.

The Los Angeles councilman, De Leon, said in his statement that he was reaching out to the governor “to highlight the need to restore these remaining properties and move quickly on legislation that would give the city more authority over these properties.”

But De Anda said Friday that rather than having the state handing the properties to the city, their hope is to persuade Caltrans to sell the vacant homes to the El Sereno Community Land Trust, which had been formed about two years ago to help residents buy up a piece of commercial property in El Sereno that had been eyed by a private developer. That group was able to block the purchase and it later turned the property into a community center called the Eastside Cafe.

De Anda said that many of the vacant homes, which had at one point numbered more than 100 properties, have long stood vacant, and she questioned whether the state was truly committed to moving quickly on selling them, and if the city has the capacity to move quickly, on addressing the needs of the tens of thousands of people experiencing homelessness amidst a deadly pandemic.

De Anda added that they are regrouping and are now asking that Newsom permit the families to return to the vacant homes, and for the highway patrol and Caltrans to stand down, and to begin conversations around selling the properties to the land trust.

Meanwhile, Caltrans officials said in their statement Wednesday that they are “working with local governments to lease several of its available properties for use as temporary emergency shelters,” and recently signed a lease with the Housing Authority of the City of Los Angeles to use 22 of the vacant homes for a city transitional housing program.

“As Caltrans continues to sell the remaining homes on the corridor, it is committed to working with local entities and other stakeholders to ensure the properties are used for affordable housing,” the statement said.

The 710 Freeway tunnel project was nullified more than 10 months ago in January, and Caltrans is required to fix up and then rent or sell the homes, activists noted.

In the news conference on Friday, De Anda said that the state should have been at the table with the community back in January.

Newsom’s office did not immediately respond to requests for comment.

The group issued a new letter Friday that included the call for Newsom to apologize, as well as the demands that the families be allowed back to the homes, the charges to be dropped against those arrested and for their belongings to be returned to them, and for the homes to be sold to the El Sereno Community Land Trust at their original price.