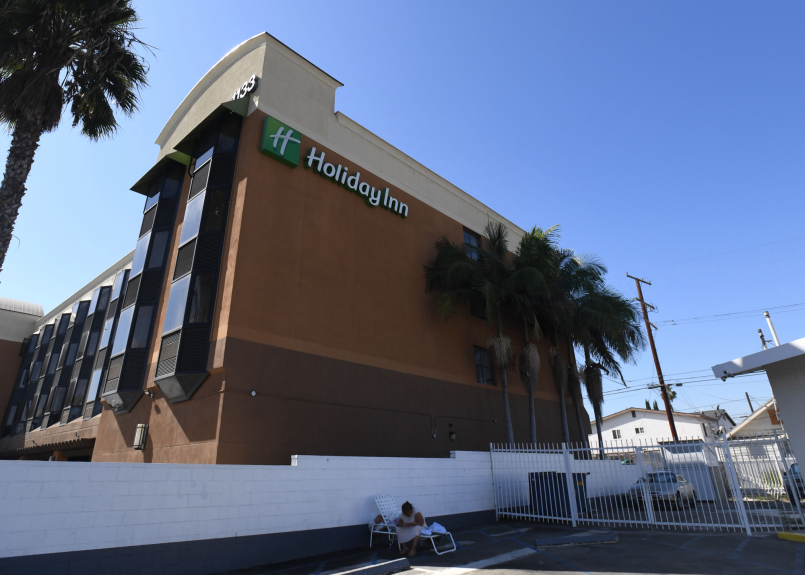 Los Angeles county officials say they will continue to ramp down Project Roomkey, a program that opened up hotel rooms to shelter unhoused people during the COVID-19 pandemic, despite the availability of federal emergency funding.

For weeks now, county and other public officials have cited budget constraints, saying that they have limited funds to pay for hotels while they apply for and await reimbursement from the Federal Emergency Management Agency (FEMA).

So while FEMA is now offering 100% reimbursement on non-congregate shelters, “it is not feasible to re-open any former PRK (Project Roomkey) sites, nor contract with any new hotels/motels for PRK,” county officials wrote in a report released last week

Meanwhile, there are plans to extend existing Roomkey sites until at least June, and potentially until September. County officials said they hope to extend contracts with 11 of the remaining 12 hotels.

“The plan to extend existing PRK sites reflects this limitation on available funding, while still being responsive to the continued need for this critical and lifesaving resource,” officials said in a report its report.

At its peak, the county’s Project Roomkey program included nearly 40 hotel sites that were sheltering people experiencing homelessness. The program has sheltered around 7,000 people, and is still sheltering over 1,300 people at the remaining hotels.

Since beginning to decommission the program last August, the county has been working to move people from Project Roomkey into more permanent housing or other shelter sites. Two of the sites were converted to what are known as Project Homekey sites where people can stay long-term, and the county has purchased two additional sites for the same purpose.

The extension come as some officials face some difficulty finding alternative sites for people to go to after the hotels close.

At the Airtel in Van Nuys, one of Project Roomkey site in the San Fernando Valley that is run by the county, public officials and the service provider for the site have struggled to find alternative housing that is comparable to the hotel rooms many homeless residents have been staying in for months, by the the original closure deadlines that were set in January and February.

According to county officials, the Airtel lease was later extended to April 10. This lease is not expected to be extended further, officials said this week.

FEMA officials say that the county has existing reimbursement requests, including $18 million for Project Roomkey.

The city of Los Angeles, as of last month, did not have any reimbursement applications on file with FEMA. The city also operates its own Project Roomkey sites. Mayor Eric Garcetti said last month that there are plans to extend three of the city’s Roomkey hotels until September.