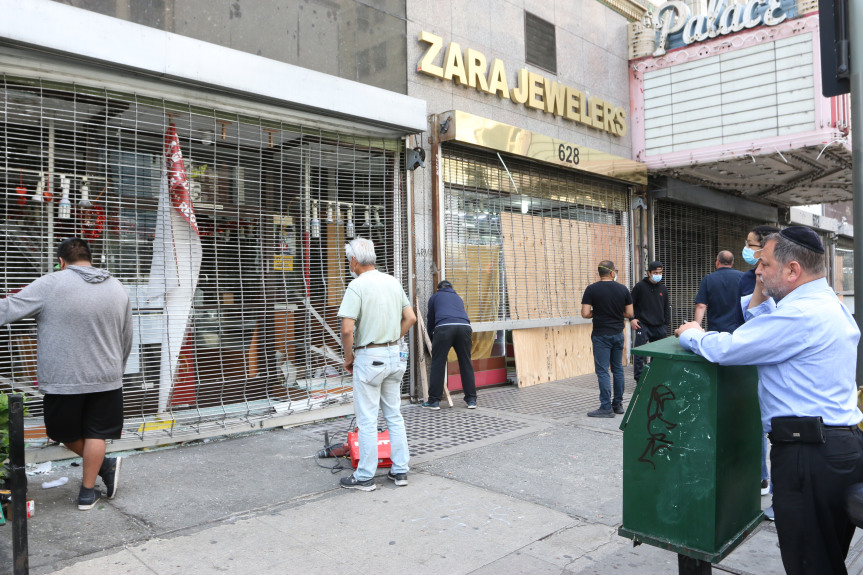 Parts of Downtown Los Angeles were in shambles Sunday morning, May 31, as the sun rose on weary business owners surveying the carnage of a day — and night — of protests, looting, vandalism, a lockdown and a state of emergency.

“Everything was broken, but thankfully they didn’t go through it, so that’s a plus,” said Carlos Tejada, 32, a resident of Los Angeles, who with his father owns a shop on Broadway and 5th Street downtown.

Tejada described a dramatic evening Saturday, when he got an alarm at 8 p.m. that things were going awry.

Living about 5 miles away, they rushed to the business, where they found windows shattered.

Shop owners along Broadway are picking up the pieces. The street looks like a bomb went off. Here a smoke shop and jeweler were looted. The store owners were too emotional to talk about it. pic.twitter.com/duVjLFefG9

The Tejadas were among several business owners who showed up Sunday morning — a day when many were supposed to be opening after months of closures due to the coronavirus pandemic. Now, shell-shocked, they were in the middle of what looked like the aftermath of a war zone, sweeping and shoveling glass, cleaning graffitti and assessing what was looted from their businesses, most  now boarded up or in the process of being boarded with plywood.

Given the damage throughout L.A., the Tejadas might have been among the luckier ones.

The damage came amid nationwide outrage that boiled over after the death of George Floyd, a black man who died while in police custody in Minneapolis, after a white officer pinned him to the ground and didn’t let up until it was too late.

But that outrage turned into what L.A. Mayor Eric Garcetti on Sunday called some of the “ugliest images in a generation” in this city.

Those images hit home in L.A.’s Jewelry District, along Broadway, where business owners told of looters stealing hundreds of thousands of dollars of jewelry, even prompting in at least one case owners to defend their stores with guns.

At J&J King of Wireless, owner Juda Anszeh, in business since 1984, said that’s exactly what happened at the business next to his, when the owners’ and family showed up with weapons to defend their property.

He couldn’t blame them, Anszeh added.

“What the police did was wrong,” Anszeh said of the Minneapolis situation. “But I don’t think it’s right to take advantage of this.”

The violence shook the residential neighborhood surrounding the district, like in Bunker Hill, where there where a sense of injustice was in the air for the destruction of business.

“As someone who works and lives in the area, these people are suffering, and then they come in and destroy their livelihoods,” said Roxanna Gotinez. “It was almost as if it was timed.”

Despite a citywide curfew, destruction and arrests continued overnight, leaving more charred and gutted buildings, broken windows, and the images of a beaten down L.A.

As the sun rose Sunday, the scope of that damage emerged, even as more protests were scheduled for Sunday in Southern California and the curfews lifted in L.A., Beverly Hills, Pasadena, and other nearby cities.