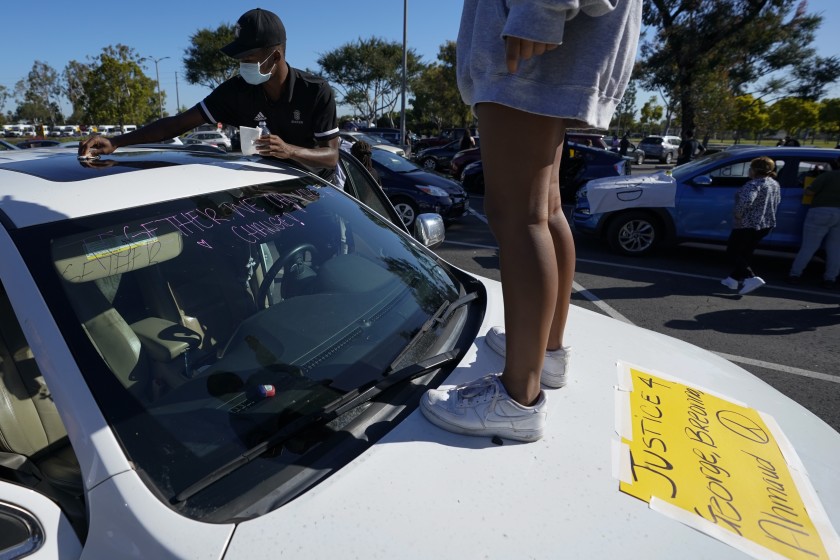 The Los Angeles chapter of Black Lives Matter and other groups organized funeral processions across Southern California in honor of George Floyd on Monday.

According to organizers, participants could meet up with others in the following locations:

The processions were set to converge at a rally and memorial service on First Street and Broadway Boulevard in downtown L.A., where members of the clergy, Black Lives Matter activists and other community leaders will appear.

A Los Angeles Unified School District educator who lives in Long Beach said she wanted to join the procession for her students.

“I don’t want to look back on this historic moment and tell my students that I didn’t do anything,” she said.

She said in addition to Floyd, Breonna Taylor and Ahmaud Arbery, the group wanted to honor the lives of Tyler Woods, Lionel Gibson, Donte Jordan, Sinuon Pream and Barry Prak, who died in the hands of local law enforcement.

Referring to Long Beach police, Modkins said “the corruption here is rampant.” She said authorities did not do anything about the death of Frederick Taft, who was shot by a white man in a public restroom in 2018.

“We are tired of the harm and abuse against black bodies,” Modkins said. “I want [Floyd’s] family to know Fred Taft’s family, Lionel’s family, Donte’s family, for them to know that they are not alone, that we are in this struggle together, and that we have been for 400 years and will continue to be.”