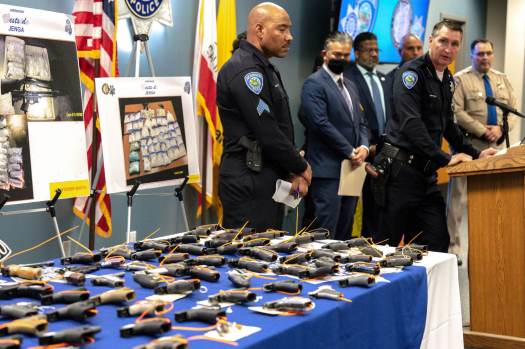 A man taken into custody in the slayings of his mother and uncle in Sylmar buried his uncle’s body in a yard while staging his mother’s death as a suicide, Los Angeles police said Thursday, Dec. 9.

Marcel Ianyves Gradvohl, 38, was arrested on Nov. 29 on suspicion of double murder in the deaths of 67-year-old Maureen Gradvohl and 58-year-old Edward Steckel after being questioned by LAPD detectives, said Lt. Chris Ruiz, a homicide detective. Gradvohl was being held on $5 million bail, according to jail records.

Detectives believe that the killings happened three days prior on Nov. 26, Ruiz said. On Nov. 29, police received a call around 8:30 a.m. from the younger Gradvohl to report that his mother had committed suicide in the 12600 block of Amboy Avenue, Ruiz said in an interview.

Upon arrival, police asked Gradvohl to come to the police station for questioning, the detective said. Ruiz said that detectives suspected the suicide was staged after looking around the scene.

The uncle’s body was eventually found buried in a yard at the location, Ruiz said.

“(The suspect) presented (his mother’s death) one way, but some astute patrol people presented it another way,” said Deputy Chief Alan S. Hamilton with the LAPD in an interview. “We would have believed (Gradvohl’s) story if we didn’t find (Steckel’s) body.”

The motive for the killings is still under investigation, the detective said.