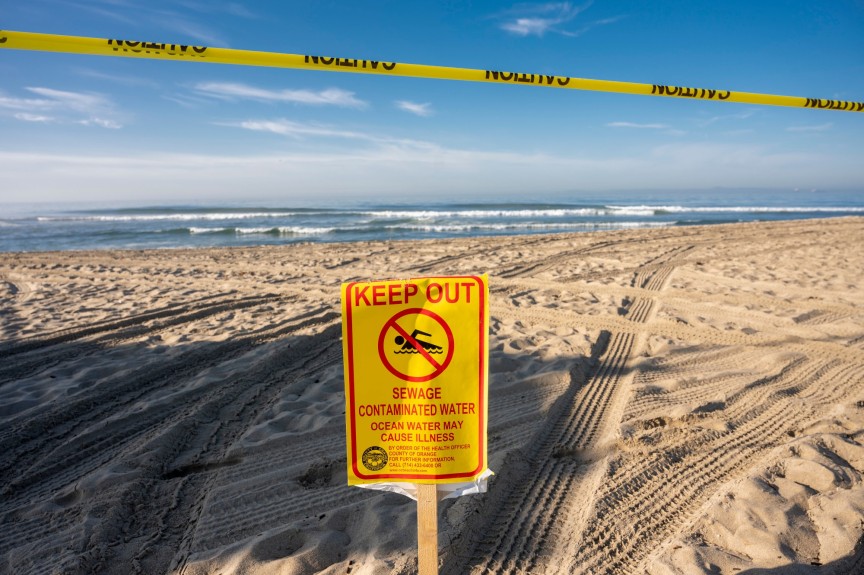 A 126,000-gallon oil spill from an offshore rig was causing major ecological damage in the waters off Huntington Beach Sunday, as officials closed the ocean to beachgoers and canceled the final day of the Pacific Airshow.

The U.S Coast Guard was leading the response to the spill, which covers about 5.8 nautical miles between the Huntington Beach Pier and Newport Beach. The spill emanated from a facility operated by Beta Offshore, likely caused by a pipeline leak.

The City of Huntington Beach cancelled the third  day of the air show Sunday to facilitate cleanup and reduce health impacts from the spill that covers about 5.8 nautical miles between the Huntington Beach Pier and Newport Beach.

“The spill has significantly affected Huntington Beach, with substantial ecological impacts occurring at the beach and at the Huntington Beach Wetlands,” a city statement said.

Huntington Beach Mayor Kim Carr said the spill of 3,000 barrels worth of oil was reported about 9 a.m. Saturday and drew a response from a broad range of government officials. A unified command of cities and agencies, along with Beta Offshore, was established.

Platform Elly is just over 7 miles off the coast of Long Beach. It is operated by Beta Operating Company, LLC, formed in 2009 and based out of Long Beach. The company offers wellbore, production handling, and processing platforms, according to Bloomberg.

Carr described the situation as a “potential ecologic disaster,” and said some of the oil had reached the shore and was impacting the Talbert Marshlands and the Santa Ana River Trail.

In order to facilitate clean-up efforts, and given the potential health impacts, the decision has been made to cancel the final day of the Pacific Airshow due to yesterday’s oil spill. We apologize for the inconvenience and thank you in advance for your understanding. pic.twitter.com/RYr796SZ3r

Skimming equipment and booms were deployed to prevent the inflow of oil into the Bolsa Chica Ecological Reserve and Huntington Beach Wetlands, city officials said. The California Department of Fish & Wildlife has also set-up the Oiled Wildlife Care Network hotline, at 877-823-6926, for people to call if they see wildlife impacted from the oil but they were urged not to approach the wildlife.

The city also closed beach access from the Pier down to the Santa Ana River jetty. Huntington State Beach later was shut down, too.

Health officials warned people not to swim, surf or exercise by the beach because of the potential health hazards, including toxic fumes, which also threaten marine life and other wildlife.

“The City fully acknowledges the gravity of the decision to cancel the final day of the iconic Pacific Airshow, and the disappointment that this decision will cause,” the city said. “However, the need for prompt and intensive intervention efforts requires complete and unfettered access to the marine environment.”

The unified command said the public was being asked to avoid any oiled areas. Trained spill response contractors were cleaning up the disaster. “Public volunteers are not needed and could hinder response efforts.

One was spotted near the Santa Ana River and another down the coast near Balboa Pier early morning Sunday, he said.

Lifeguards are asking people to stay clear of the area, though the beaches have not yet been officially closed in Newport.

Newport Beach officials said oil was spotted on the beach between 52nd Street and the Santa Ana River.

“Right now, we’re just assessing the situation,” said Marine Safety chief Mike Halphide said early Sunday. “The lifeguards are out advising people to voluntarily stay out of the water because of the oil and above the high tide line, so they don’t expose themselves to the oil or track it to the other areas.

Halphide said the oil was first seen coming to shore at about 10 p.m., and by this morning clumps of oil 2-to-5 inches in diameter were spotted on the sand.

State Parks spokesperson Kevin Pearsall said parking lots at Huntington State Beach are closed and people are being asked to stay away. Most likely, once the county health department assesses the situation, they will be closed.

“We’re expecting that today,” he said.

State Parks staff has been advised to not go onto the beach because of the hazards.

The type of oil spilled — already processed — is especially dangerous, Pearsal was told.

“Everybody is being very cooperative with each other, this is affecting everybody and everything,” he said.

Pearsall said Saturday was one of the busiest days on the sand likely in Huntington Beach’s history, surpassing Fourth of July crowds, with likely 1 million people along the shoreline.

“We couldn’t see, the beach was full of people,” he said.

Likely, the amount of revenue lost to State Parks and other cities will be in the millions just from closing the beach Sunday, he said.

By the evening hours, when low tide exposed the wet sand, lines of black oil stuck on the sand across the waterline.

Pearsall said people who are hoping to volunteer with a clean-up effort should stay clear, for now.

In Huntington Beach, people were disappointed the air show was canceled but tried to adapt.

Retired sisters Sharon Martin and Barbara Truitt, of Fountain  Valley, were looking forward to the show after last year’s cancellation.

“ The noise, the people, the beautiful planes – it’s exciting, “said Truitt, as the two unloaded their bicycles from their car at Bolsa Chica State Beach, which remained open. She added, “I feel for all the wildlife.”

Carlos Luna, 60, left his home in West Covina at 5 a.m. with his wife, daughter, son-in-law and two grandchildren, all of whom were looking forward to seeing the show. They arrived before sunrise, hoping to beat the lines, only to find out that Huntington State Beach was closed. But having brought provisions to spend the day, they drove instead to Bolsa Chica State Beach, set up their table and brought out the food.

“We decided that since we were already here, have breakfast, and make the best of it, “he said.

The last big oil spill that happened in 1990 caused Bolsa Chica State Beach to be closed for nearly a year, he said.

The US Coast Guard is the lead agency, coordinating the response to the oil spill and investigating how it occurred. The most current information indicates the leak has not been completely stopped but preliminary patching was completed to repair the oil spill site and repair efforts will be attempted Sunday.